The recession, combined with airline mergers and consolidation, has jolted airports in Virginia and nationwide.

A study released in May by the MIT International Center for Air Transportation found that the nation’s 29 largest airports lost 8.8 percent of their scheduled domestic flights from 2007 to 2012.

Smaller airports were hit harder, losing 21.3 percent of their flights.

One outcome is that Virginia’s airports have become more competitive. They’re improving the passenger experience and innovating at every opportunity.
From small airports to large, change is underway, with projects costing a total of more than $50 million. Here’s a rundown on the runway:

The airport’s improvements include a new café, Wi-Fi service and places to power-up technology. It also added 100 parking spaces, bringing its total to more than 600.

The changes have had an effect. “We have increased [passenger traffic] every year since 2008,” says Greg Campbell, the airport’s executive director. “The year to date, we’re up 16 percent.”

Campbell believes that prospective passengers have increasingly seen the value of using the airport. He ticks off some advantages: free parking, shorter lines, less driving and good connections.

Through Silver Airways, operating as United Express, airport passengers fly to Washington Dulles International Airport, where they can connect to hundreds of domestic and international destinations. 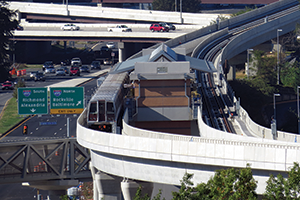 Washington Dulles International Airport, straddling the line between Loudoun and Fairfax counties, is a key hub for airports throughout Virginia, with connections to far flung parts of the world.

Now, it’s awaiting a connection of its own — to the Silver Line, also called the Dulles Corridor Metrorail Project.

A primary goal of the 23-mile extension of the Washington Metro Rail System is linking the capital by rail to Dulles, along with the so-called “edge cities” in the region. Another goal is to make Tysons Corner, one of the region’s biggest employment hubs, accessible by train.

The Silver Line is one of the largest transportation projects in the country and is expected to cost nearly $6 billion when finished.

Phase I of the project is nearly complete, and Phase 2 is under construction. The entire project is expected to be wrapped up and running by the end of the decade.

The Silver Line is also expected to be an economic boon for Fairfax and Loudoun counties, with new development blossoming along its path.

If food and shopping are on your mind when you fly out of Dulles or Reagan, the airports have good news for you.

They recently began their most ambitious food and retail makeover in two decades. Over the next few years, nearly all of the airports’ concessions will be replaced or renovated.

“One of our goals will be to bring local iconic brands into the airports,” says Rob Yingling, a spokesman for the Metropolitan Washington Airports Authority, which operates Dulles and Reagan National airports.

Dulles has experienced a steady increase of international service every year since 2003. For example, the airport reported in early 2013 that Dulles had become the second largest gateway to the Middle East.

Reagan continues to have strong demand for domestic service. It had its most traffic ever in 2012.

Roanoke Regional
After spending millions of dollars on airfield improvements, Roanoke Regional Airport officials decided two years ago that its terminal, built in 1989, needed a facelift.

“We had sort of made a promise to the community,” says executive director Jacqueline Shuck. “We want them to be proud of what we present. It’s our community’s front door, especially for business.”

The airport accomplished the re-do in three stages. The first phase, which has cost about $4 million, focused on the concourse.

New escalators have been installed, carpeting has been replaced by high-grade tile, six restrooms have been rebuilt, and signage has been modernized. Finally, colors have been changed from blue and gray to earth tones with a splash of red. “It’s changed the whole look,” Shuck says.

The second phase of the overhaul will involve development of a new concession area, while the third phase will tackle the ticket and baggage claim areas.

Shuck says an airport of Roanoke’s size can’t always compete with larger airports on ticket prices, but it can offer travelers convenience and the personal attention that they might not receive elsewhere.

A new role the airport has taken on is advocate for passengers, Shuck says.

If flights are continually late on a certain airline, “We try to get to the bottom of it,” she says.

Allegiant Air’s service from Roanoke to two Florida destinations — St. Petersburg and Orlando — has become a magnet for regional passengers.

“We see people coming from an hour and a half away,” Shuck says.

Allegiant is one of four airlines that serve Roanoke.

It’s also very busy because of one of its neighbors, Liberty University.

During the past decade, Liberty’s School of Aeronautics has grown from four students to more than four hundred in its FAA-certified aviation program.

The university says it has been approved to train and certify everyone from private pilots to airline transport pilots. That means a lot of flying at the local airport.

Commercially, the airport is served by U.S. Airways with connections to Charlotte, N.C.

Lynchburg Regional recently received a $4.1 million grant from the Federal Aviation Administration for rehabilitation, relocation and expansion for its taxiways and aprons.

It is part of a $5.8 million project that will also include reconstruction and realignment of several taxiways that serve general aviation.

Earlier this year, Lynchburg was told that it might lose its control tower, unless it could prove that it fulfills a compelling national interest.

So far, the tower is still in operation. But Courtney says he doesn’t know what’s ahead.

She had been director of the Pensacola International Airport in Florida, which was named Florida’s commercial airport of the year in 2011.

“Any airport is the best economic engine any community could have,” she says. “It virtually operates without tax dollars, and it serves as the first impression of the community.”

Crawford says the airport is in the final stages of completing an 800-foot runway extension in the works for several years.

The airport also is redesigning its terminal to include upgrades ranging from family restrooms and mothers’ nursing stations to a second security screening lane and an in-line screening machine to move passengers and their baggage through more quickly.

Total cost of the project is estimated at $3 million to $4 million. 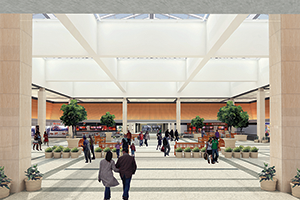 Norfolk International Airport is adjacent to the Norfolk Botanical Garden, and the airport plays on that theme, calling the main lobby of its departure terminal, “Garden Square.”

Soon, the lobby will have a much more gardenlike setting, with a profusion of natural sunlight.

Skylights are being installed in the ceiling as part of more than $20 million in airport improvements.

Lobby improvements will include the replacement of four escalators that carry passengers from the first-level ticketing area to the second-level main lobby.

New carpet and hard-surface terrazzo flooring also will be installed, as well as additional plantings and furniture, and areas for small children.

Security checkpoints will be greatly expanded, from four to six lanes, to give passengers and security personnel more room.

New and expanded restaurants, upgraded and healthier menu choices, and renovations to retail and gift shops also are in the new mix.

General aviation facilities will get upgrades, including renovation of the terminal and expanded public parking.

“It’s a very challenging time with the economy, but air travel is still a necessity,” Bowen says. “There’s no question some factors are beyond our control. But we’re in the black, and we’ve never been in the red. We’re a very low-cost facility.”

“It accounted for 43 percent of our market share. It was a big hit for us, and we’re still recuperating,” says Jessica Wharton, the airport’s director of marketing and public affairs.

The airport anticipates a boost when Apple Vacations begins offering nonstop service to Cancun via Frontier Airlines. Flights will run from Feb. 8 through April 19.

Meanwhile, the airport is forging ahead with a list of improvements.

For example, an $11 million project to repave three taxiways is nearing completion, and one of its concourses is being refurbished with new skylights and flooring and a new escalator. The refurbishment is expected to cost about $4.2 million.

“It’s something we’ve requested for more than 15 years,” says Troy Bell, the airport’s director of marketing and air service development.

When Southwest serves an airport, Bell says, it sets the bar for pricing. “When Southwest is not in the market, prices tend to be higher.”

Having secured Southwest, the airport now has trained its sights to the West.

The money will offset revenue losses for airlines that establish Western routes to preferred destinations.

Currently, airport travelers have nonstop Western service to only Dallas, Houston and Minneapolis.

Richmond International suffered a setback in 2010 when discount airline JetBlue ended its popular service to New York. Since then, Richmond-to-New York fares have soared.

“There’s been a 700 percent increase in walkup fares [to New York] since then,” Bell says, reflecting how quickly things can change in the airline industry.