The site at 3340 W. Norfolk Rd. is located one mile from the Port of Virginia’s Virginia International Gateway Terminal and has five railroad tracks connecting the site to Norfolk Southern and CSX rail.

The 44-acre parcel was previously occupied by chemical company BASF Corp. for more than 100 years. Because the property was predominantly used to manufacture products such as insecticides and refrigerants, buildings once located on the parcel were destroyed and the land was remediated by the Virginia Department of Environmental Quality’s Voluntary Remediation Program in order to create 285,000 square feet of developable industrial property.

“The property had myriad complexities that precluded it being put into useable service,” said Ken Benassi, senior vice president with Colliers, who represented the seller, Elite MGMT LLC, in the complex real estate repositioning and sales. “It was best taken out of corporate real estate hands and sold to an entrepreneur. Elite MGMT took the risk, solved the problems and was rewarded for its efforts.”

The other 40 acres of the property were bought by Marathon Development Group Inc. in April 2019.

Colliers is based in Toronto, Canada, has approximately 14,000 employees and operates in 68 countries. 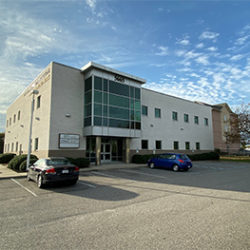 The two-story building was constructed in 2007.