When Standard Insurance Co. was looking for a site for a new East Coast operations center, Lynchburg and Altavista made the short list — even though they are only about 20 miles apart.

“That was no accident,” says Bob Speltz, senior director of public affairs for Portland, Ore. – based Standard, a 110-year-old insurance and financial services company. “We knew that there would be a great pool of highly skilled, loyal talent to draw from within the region, and we felt like it offers an ideal quality of life, which is so important to attracting and retaining the very best folks in the marketplace.”

Economic development officials in both localities did their best to win the project, but the competition wasn’t a zero-sum game.

As long as one of them landed the deal, then the whole region stood to gain, says Dennis Jarvis II, Altavista’s economic development director.

“When one of us grows, we all grow,” Jarvis states. “Cars are bought. Houses are bought. Goods and services are acquired. We do our very best for our own community, of course, but we think it’s a blessing any time one of our partners in the region is successful, whether it’s the Lynchburg city core or Bedford or Amherst or Appomattox or Campbell County, because we all derive some indirect benefit from it.”

“By aligning talent, financial resources and volunteer board members within one organization, we are now all focused on a single mission of leading regional economic development,” says Megan A. Lucas, CEO of the new group.

“Megan and her team can go out and tell our story and deal with the larger regional issues, which frees up our local chambers to focus on supporting their members and helping them grow and succeed,” says Traci Blido, Bedford County’s economic development director.

The group has developed a comprehensive economic development strategy and organized Virginia’s first regional connectivity study. It also spearheaded an effort to obtain $85 million from the Virginia Smart Scale funding process, formerly known as HB2, to upgrade the region’s roadways.

“I would definitely say that the theme and temperature here is the collective collaboration and cooperation that exists now to advance the region,” Lucas says. “Everyone here and all of our regional partners are working really, really hard, and it’s making a difference.”

On a roll
In the first nine months of 2016, the Lynchburg region saw 603 new jobs and $47 million in capital investments by new and existing businesses.

One of the new arrivals is Standard Insurance. In June, the company decided to put its operation center in Altavista, thanks in part to what Standard’s Speltz describes as “a strong cultural fit,” along with an incentive package that included a $320,000 Tobacco Commission grant. Another key factor was that the town had a vacant building once used as a call center that “is basically turnkey and will give us plenty of room to grow,” he says.

Standard plans to invest nearly $3 million in the facility, which will process claims. The firm now has 30 employees in place and expects to hire another 200-plus benefit and claims analysts by 2020. Their median pay will be $17 to $19 per hour.

Henrico County-based Genworth, a Fortune 500 company, has operated in Lynchburg since 1955 but has seen major losses in recent years.  In October, Genworth announced it is being sold to Beijing-based China Oceanwide Holdings Group for $2.7 billion.

Genworth, which will keep its headquarters in Henrico, will continue to have a customer service center in Lynchburg, which now has about 800 employees. “We expect that they will remain a strong company,” says Marjette Upshur, director of Lynchburg’s Department of Economic Development. 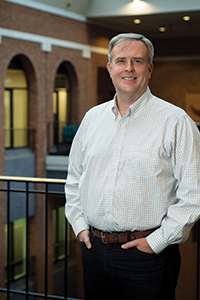 Mike Shadler, Pacific Life’s vice president of Lynchburg operations, explains that his company acquired Genworth’s term-life technology platform and the downtown Lynchburg building that houses it as well as a group of former Genworth employees who have the skills needed to launch the business. The deal, however, did not involve the transfer of existing Genworth policies and policyholders. “We’re building from the ground up here,” says Shadler.

Pacific Life has been known for its focus on affluent consumers, he explains, while the acquired capabilities are designed to target a broader market.

“Those are two very different sets of customers and distribution models, and they require very different capabilities,” he says. “With this acquisition, we now have the capability, processes and people  to go after a brand-new market space immediately, without taking away any resources and focus on our existing business.”

Pacific Life will invest $4 million and hire approximately 300 employees, including insurance case managers, underwriters, IT experts, business analysts and HR specialists during the next two years as the business grows. The goal, Shadler says, is to be able to process 100,000 term policies by early 2018 and process another 100,000 policies every year after that.

Other new businesses have also moved into the region. Meat processor  Seven Hills Food redeveloped a century-old, 40,000-square-foot facility in Lynchburg and expects to have more than 40 employees within the next three years.

Bedford also will get its first brewery when Beale’s Brewery & BBQ, a project by Petersburg-based developer Dave McCormack, opens a production facility, taproom and restaurant next summer. “We will sell to grocery stores and anywhere you can buy packaged beer, and we plan to be in both the Lynchburg and Roanoke markets,” McCormack says.

Taking stock and rebuilding
The region’s redoubled effort to collaborate more effectively is in part a response to a period of local economic turbulence. The area has lost more than 2,500 jobs in recent years, including 1,000 in 2016, according to Alliance officials.

The insurer Nationwide closed its Lynchburg office as part of a larger consolidation effort in 2015, resulting in the loss of 300 jobs. The Timken Co., which makes transmissions, power trains and other engine parts, is relocating its Altavista operations to another plant in North Carolina, a decision affecting 125 jobs.

Areva Inc., the France-based nuclear energy giant and one of Lynchburg’s largest employers, trimmed its payroll by 50 positions in 2016, the latest in a series of adjustments the company has implemented in response to decreasing industry demand.

Denise Woernle, Areva’s vice president of communications, says the company is diversifying its portfolio of products and services.

Areva’s Lynchburg-based Operational Center of Excellence for Nuclear Products and Services recently developed a more cost-efficient maintenance technique called “cavitation preening,” as well as the most comprehensive nuclear testing facility in North America, which allows the company to more reliably support the long-term operation of the existing nuclear reactor fleet.

No one in the region has had it tougher than Amherst County. Two years ago the county was bracing for the loss of its largest employer, Central Virginia Training Center — scheduled to shut down by 2020 — when Sweet Briar College, its second largest employer, announced it would close. “The combined job loss of nearly 1,500 [positions] represented about 25 percent of all jobs in Amherst County, and it was going to create a huge negative loss of economic activity,” says Victoria Hanson, executive director of the Amherst County Economic Development Authority.

The college was saved through a Herculean effort by devoted alumnae, regional businesses and the local government, but the incident galvanized the community. “There’s nothing like a scare like that to get everybody’s attention,” Hanson admits.

In response, the government obtained $122,000 in grant funding and ponied up $3,000 of its own money to conduct a comprehensive economic development strategic plan.
“It’s unusual for a small rural county to get this much money to take this in-depth level of a look at what we could do, and I like to think that these funders recognized the crisis that was brewing here,” Hanson says. “And the community was overwhelmingly interested and motivated to participate and provide their input.”

In 2016, Hanson and her team began to implement a multi-pronged plan. They are creating a new brand for the county and are proactively performing environmental assessments and leveling sites in its existing business parks. In addition, a new visitor’s center, located in a refurbished train depot, will open this year.

From the ground up
Upshur notes that, while it’s exciting to attract new business prospects, economic development officials in the region are putting most of their focus on supporting existing businesses and developing talent.

Several localities, including Lynchburg and Altavista, are running entrepreneurial boot camps that have helped a number of graduates in starting  companies. Lynchburg, meanwhile, kicks off the first of several TechHire training sessions in January to prepare unemployed residents for jobs that are in high demand.

Upshur explains that 15 local employers, including Centra Health, Sharptop, BWXT, RR Donnelley and Porter’s Fabrication, will provide training and paid apprenticeships to 210 people during the next four years. “We are bridging the gap between opportunity and training, such that we’re saying to these employees, ‘If you train with us, you will also be employed by one of these companies at the end of your training period,’” she says.

The region already is benefiting from a number of recent expansions. In Altavista, BGF Industries and Schrader-Bridgeport International are collectively investing $5.5 million in new tools and machinery, which will result in a total of about 50 new jobs, while Abbott Laboratories expects to add another 50 jobs once it completes a nearly $40 million expansion of its nutrition manufacturing facility. 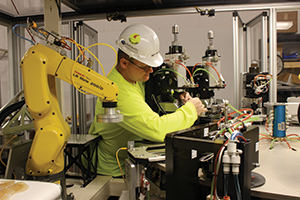 Bedford also has seen a lot of new business activity.  Simplimatic Automation, which provides materials handling, conveyor automation and robotics integration, moved from Campbell County to the 500-acre New London Business and Technology Center in April 2015, where it built a 60,000-square-foot facility.

Also in the New London park is the Center for Advanced Engineering and Research (CAER), a 10-year-old R&D facility and business incubator. It has worked with 10 companies that have either expanded or relocated to Bedford County. An example is the International Critical Infrastructure Security Institute (ICISI), a nonprofit organization that tests, validates and certifies cybersecurity solutions.

Another new Bedford firm is NanoTouch Materials. It moved to the CAER facility from Lynchburg after receiving a $2 million Tobacco Commission grant to commercialize its self-cleaning mats and surfaces. The company plans to sell its products to hospitals, hotels and facility management firms. The four-person firm, which recently won an international innovation award for new cleaning agents, plans to hire up to 16 more employees and build a facility in the New London park, says co-founder Mark Sisson.

“We’re currently working with the Bedford Economic Development team and the Tobacco Commission to figure out what funds might be available to accelerate that project and [get] that building done sooner, even as we continue working to grow market awareness and sales,” he says.