CIT programs help early-stage companies get off the ground

Just two years ago Disrupt6 co-founder and CEO Joe Klein was a defense contractor with more than 30 years of cybersecurity experience — he battled his first hacker in the 1980s. But Klein had never been able to get his own business off the ground until he was asked last year to pitch his business idea as part of CIT’s MACH37 initiative to promote cybersecurity startups.

“I think I have a better opportunity for successfully running, executing and building this business into something amazing with their assistance,” says Klein, whose business was one of six that were accepted into MACH37’s spring 2014 cohort out of more 80 pitches. “They’ve also educated me on the current issues of business, the IRS, accounting, HR, and introduced me to the right people. In fact, I have four follow-ups this week. They’re really awesome.” Since graduating from MACH37, Klein now works for himself and employs four part-time workers. Disrupt6 provides threat intelligence to corporations and governments, with special focus on the Internet of Things and IPv6 technology.

A nonprofit founded in 1985, Herndon-based CIT is a subsidiary of the Innovation and Entrepreneurship Investment Authority, which was created and funded by the state General Assembly. CIT promotes economic development opportunities for technology entrepreneurs and startup companies across the commonwealth. State-funded CIT initiatives such as MACH37 and the CIT GAP Funds program help CIT reach this goal.

Named for the velocity needed to escape earth orbit, MACH37 is a 14-week educational business accelerator program for early-stage cybersecurity businesses that provides companies with a $50,000 investment and matches businesses with investors and well-known business mentors. MACH37, which was established by a one-time $2.5 million appropriation from the General Assembly, is open to any cybersecurity company around the world. However, as a condition of entering the program, companies must agree to establish a significant presence in Virginia within 24 months of graduating MACH37 or it forfeits the $50,000 investment from CIT. CIT invests in about 10 companies via MACH37 each year. 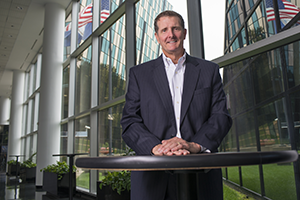 “It has an increasing national and global reputation. We’ve had 23 companies go through the [MACH37] program and we have eight more scheduled in our fall cohort this year,” says CIT Managing Director and Vice President Thomas Weithman, who launched MACH37 in fall 2013. He compares MACH37 to Techstars, an international mentorship-driven startup accelerator led by Colorado entrepreneurs and venture capitalists David Cohen and Brad Feld.

MACH37 is “a very intense program,” says Klein. In addition to attending class all day and completing the assigned reading, “you’re still trying to get your business off the ground any time that you don’t have a class or [a meeting with] a contact. It’s pretty incredible. It’s not for the faint of heart.”

To graduate, company owners deliver a presentation to an audience of MACH37 alumni and investors. Graduates are also encouraged to continue attending MACH37 classes and meetings, as some of the companies work together or partner to develop technologies.

AXON AI was started in March 2014 and graduated from MACH37 in November 2014. In addition to its $50,000 MACH37 grant, CIT also provided AXON AI with additional commercialization grants and helped connect AXON AI to state grants.

For Markulec, the mentoring and networking that CIT provided to his company in its earliest days also was invaluable. International security expert Matthew G. Devost “helped us refine the strategy and really determine who the target market is. He helped me streamline our strategy and product road map with the needs of the end user.”

About a decade ago Weithman also started the CIT GAP Funds program, which provides small but promising early-stage technology, life-sciences and clean-tech startups with an infusion of funds to help them stay in business so that they can build their market share and raise the venture capital they need to become self-sustaining.

Explains Sean Mallon, senior investment director for the CIT GAP Funds: “If you’ve ever watched ‘Shark Tank,’ they basically pitch us on what they’re working on and when we like the story, and we like the people and we like the opportunity, we have the ability to write relatively small checks, usually about $100,000, to help them get off the ground … For every dollar we’ve invested, there’s been $16 of private capital” invested in the companies.

The General Assembly allocates about $3 million to $4 million per year to the CIT GAP Funds initiative, allowing CIT to invest $100,000 to $200,000 each in 15 to 20 businesses per year.
In exchange for its investment, CIT gets a small equity stake in the business but what CIT brings to the table is more than worth it, CIT GAP Funds recipients say.

“CIT was an early investor and big supporter of WealthForge,” says Mat Dellorso, co-founder of the Richmond-based online private securities trading platform. For WealthForge, more important than the financial investment was the credibility CIT brought to their company. “They do pretty good due diligence,” Dellorso says, adding that CIT helps them network and connect with investors. “It was sort of a stamp signaling to other investors that WealthForge was something to check out.”

“They can really connect you with the right group of investors,” says Wayne Chiang, co-founder and CEO of Dulles-based ThreatQuotient, which helps protect Fortune 500 companies and government agencies from cyber attacks. “Based on the introductions that they’ve made, our last $2 million in funds have largely been facilitated by introductions through the CIT GAP Funds.”

For Bob Summers, founder and CEO of Blacksburg-based Fitnet, CIT Gap Funds helped his company make a critical hire in order to make their launch date.

Founded three years ago, Fitnet is a fitness app that uses proprietary technology to measure a user’s exercise quality via the camera on their smartphone or tablet — essentially a virtual private trainer. The company was founded in part with a grant from the National Science Foundation, but the federal money wasn’t coming fast enough to make the hires Summers needed. Enter CIT, which has invested a total of $200,000 in Fitnet so far, including an initial $50,000 grant that helped Summers make a critical hire needed to keep their launch on schedule.

“We wanted to launch on New Year’s Day because people really start thinking about fitness on New Year’s Day,” Summers explains. “CIT was really critical for us getting it [launched] on time to meet that date. That was a big moment in our company’s history.”

Today Fitnet has more than 250,000 users in more than 200 countries and has six full-time employees.

“The mission of CIT is to invest in really innovative companies that have potential for really high growth and that are just starting up,” says Ben Hastings, co-founder and CEO of Arlington-based PerformYard. “I think that they’ll get a great return on their investment, but they’re also making a meaningful contribution to companies that are going to grow and create a lot of jobs and do big things in Virginia. We’re a good example of what they’re trying to make happen.”

CIT has also invested $200,000 in PerformYard, which was founded in 2013 and markets a software platform that helps companies increase employee performance and track corporate goals. The company has 10 employees and plans to grow to 15 employees by mid-2016.

Klein from Disrupt6 says he highly recommends CIT to other tech entrepreneurs: “If you have a great … idea and you have some prototypes that you could demonstrate and you have a team around you that can help you do this, go talk to them. They are the people that can make it happen.”