Civica Rx, a nonprofit generic drug-maker with a pharmaceutical manufacturing plant under construction in Petersburg, plans to produce three forms of insulin priced at $30 per vial beginning in early 2024, a project that dovetails with a bill in Congress that would cap consumers’ out-of-pocket insulin costs.

Civica’s 140,000-square-foot, $124.5 million Petersburg production facility will become the Utah-based manufacturer’s North American headquarters when it opens in early 2024. Built to produce medicines for the treatment of COVID-19, the plant also will include space for insulin manufacturing, company representatives said during an April tour. Civica plans to hire up to 250 people for the factory, up from its original plan to hire 186 workers.

“We’ve had a bunch of large donors who are very concerned about diabetes and the cost of insulin come to us and ask us to [manufacture] insulin,” says Civica President and CEO Martin VanTrieste. The $30 insulin vials will cost “about 90% [less] than today’s list price,” he says. “And,” he adds, “as you know, the list price is a price no one pays unless you have no insurance.”

In April, the U.S. House of Representatives passed a bill to cap insulin prices at $35 a month or 25% of an insurance plan’s negotiated price, whichever is lower. According to the Health Care Cost Institute, insulin prices doubled between 2012 and 2016.

In Petersburg, Civica is partnering with Richmond-based Phlow Corp. and Rancho Cordova, California-based AMPAC Fine Chemicals to produce COVID drugs as part of a federal initiative to create a domestic supply chain for critical pharmaceuticals and ingredients. U.S. Sen. Tim Kaine visited the Civica plant, which is halfway completed, in April, participating in a roundtable discussion about drug costs and workforce training initiatives at the region’s universities and colleges.

Kaine supports the $35 out-of-pocket cap on insulin costs and hopes to revive a previous bill he introduced to allow students to use Pell Grant funds to pay for short-term certificate programs in pharmaceutical manufacturing and other vocational studies.

“I think most of us feel better about the quality when it’s made here at home,” he says. “You don’t have to assume that China’s a bad actor, [but] in the next pandemic, they are naturally going to prioritize producing pharmaceuticals for their own population.” 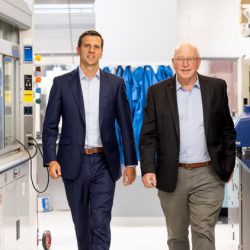