For decades, Northern Virginia has experienced the kind of growth and prosperity that other areas of the country see only in their dreams. Now, several projects that are massive in both scale and ambition are poised to push development in NoVa to a level unprecedented even for such a go-go region.

In Tysons, once a sterile suburban crossroads known for its car dealerships and shopping malls, a brand-new city is taking form, and by 2050, it is projected to be home to 200,000 jobs, 100,000 residents, and 150 million square feet of development.

In Arlington, one of the world’s biggest and wealthiest corporations, Amazon, is building its East Coast HQ2 headquarters, which is expected to encompass as much as 6 million square feet of office, retail and residential space and employ at least 25,000 people in highly skilled — and highly paid — jobs by 2030. Like Tysons, it will also create a new region from scratch: the burgeoning National Landing district.

And in Alexandria, Virginia Tech is making a $1 billion investment in the creation of its 1-million-square-foot Innovation Campus, which will produce graduates who can help the region fulfill its aspirations to rival Silicon Valley as a tech nexus.

Northern Virginia “is sitting pretty. It’s a remarkable thing it has pulled off,” says Christopher B. Leinberger, research professor of urban real estate and chair of the Center for Real Estate & Urban Analysis at the George Washington University School of Business. Leinberger believes that NoVa is positioning itself  “to become a powerhouse in the 21st-century tech world,” and it’s nailing its audition for the part by busily creating precisely the kind of high-density, multiuse neighborhoods this new world demands.

Tysons
On the outskirts of Washington, D.C., in suburban Fairfax County, an urban, citylike area dotted by skyscrapers has been very deliberately emerging during the last decade. On any given day in Tysons, one can spot a host of construction cranes across the horizon.

It’s “the greatest placemaking experiment in America,” says Tysons Partnership President Sol Glasner. The phrase “endpoint” does not apply to growth there, he says, because “there isn’t one.” 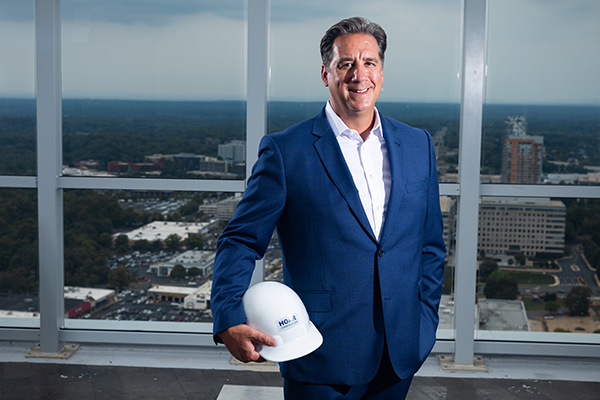 One of the latest deliveries at Tysons is The Lumen, a 32-story apartment building advertised as being just steps away from the Silver Line’s Greensboro Metro station. The sleek, amenity-heavy tower is typical of the new Tysons vibe. The building’s 398 units have been filling up rapidly, with an assortment of millennials, married-with-no-children couples and empty nesters attracted by the urban setting, says Rob Mooney, director of business development for The Lumen’s builder, Hoar Construction.

Although the walkable quotient essential to a real city is still largely lacking, it will increase with more development, he says.

True walkability also remains aspirational at the Capital One complex at Tysons, but as the neighborhood near the Silver Line’s McLean stop is built out, that too should change.

The Capital One site is anchored by a 31-story office tower, the tallest building in the region, second only to the Washington Monument. A Wegmans grocery store opened nearby last year, and a $120 million performing arts center with a rooftop park is slated to open in fall 2021. A second tower is expected to be completed in 2023.

The Boro, however, already is walkable and thus is something of a template for redevelopment at Tysons. 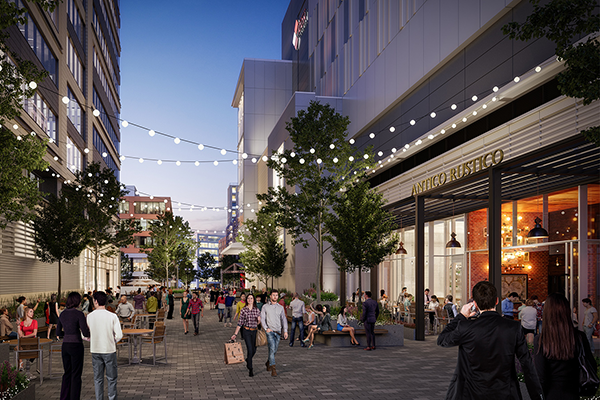 “The street grid came first” at this mix of luxury residences, high-end office space and retail located just a block from the Silver Line’s Greensboro Station, says Robert Sponseller, design principal for Shalom Baranes Associates, which co-designed the complex with the architecture, design and planning firm Gensler. A joint project of two commercial real estate development companies, The Meridian Group and Kettler, The Boro is projected to top out at 4.25 million square feet of development and includes the largest Whole Foods market in the region.

What Sponseller calls the “new urbanization” at The Boro emphasizes the public realm by paying particular attention to how buildings complement the street network. The Boro’s taller structures have been kept to the periphery of the 18-acre site, and parking lots are hidden underground or screened by other uses. The  aim is to create a neighborhood on “a good scale, like SoHo,” the architect says.

In the planning stages next for Tysons is The View, a 600-foot tower that will be taller than the Washington Monument. Another Gensler project, The View pro­m­­­­­­­ises 3 million square feet of mixed-use development on eight acres near the Spring Hill Metro. It is slated to go before the Fairfax Board of Supervisors in October.

In July, supervisors also approved plans for another gargantuan project, The Mile. Located near the Tysons Corner Metro station, it will feature 10 acres of parks and more than 3 million square feet of mixed-use development on 38-plus acres. The project of PS Business Parks LP “is a super-big deal,” Glasner says.

Eventually, Tysons, which covers about 4 square miles, is envisioned to be redeveloped into eight neighborhoods like The Mile and The Boro, all clustered around Metro stops and linked by strollable streets. In the interim, however, Fairfax County is considering an autonomous shuttle to help residents and workers negotiate pedestrian-unfriendly areas, says Terry Clower, director of George Mason University’s Center for Regional Analysis. “It should help with the ‘cool’ factor,” as well, he says.

Nevertheless, Glasner says, “a lot has to happen before Tysons becomes a true, cohesive 24-7 urbanized area,” and Sponseller, The Boro architect, seconds that opinion.

“Tysons was the notorious poster child for the worst kind of urban planning and sprawl,” he says. “Giving it a soul is a big undertaking.”

Amazon HQ2
Unlike Tysons, National Landing, the new moniker for the areas of Crystal City, Pentagon City and Potomac Yard that will host Amazon’s HQ2, already has an excellent street network, plus easy walkability to the Crystal City Metro.

Like Tysons, though, the Arlington area has long been derided as a soulless place, notorious for becoming an empty concrete canyon after 5 p.m.

That is a decidedly un-Amazon situation, and all indications are that changing that atmosphere will be a top priority.

Bryan Moll, executive vice president for Maryland-based developer and property manager JBG Smith, which is developing the HQ2 project, says his company is looking to Amazon’s Seattle headquarters for guidance in how it should go about reconfiguring the National Landing landscape.

“The culture of Amazon is walking and biking,” Moll says. “Amazon likes to build communities, not campuses.”

The online retailer deliberately does not offer subsidized food or have a fitness center at its Seattle headquarters, the better to encourage its employees to venture out and become part of the neighborhood. Tellingly, JBG Smith’s first building project at Crystal City, the 109,000-square-foot Central District Retail, will provide the area with what Moll calls “eater-tainment” — dining venues that have been largely absent until now.

The first phase of HQ2’s construction will see the redevelopment of a block of vacant warehouses into two LEED Gold-certified buildings, along with retail and open space. It will include space for 600 bikes and an expanded bike path network.

“We have a playbook that really works,” Moll says. “It is research-driven, with the right designers and the right feel.”

Virginia has promised $573 million in incentives for jobs created at HQ2, and the state and Arlington County have pledged $223 million in transportation improvements.

Arlington’s interim economic development director, Alex Iams, believes that will be money well spent. During the next 16 years, he predicts, HQ2 will generate $342 million in tax revenue, while diversifying the tax base away from reliance on a shrinking federal sector.

Calling it a “brilliant move,” GW’s Leinberger predicts it will perform a similar role in providing a tech-talent pipeline as the University of Washington has at Amazon’s original corporate headquarters in Seattle.

But those effects are going to take a while to kick in.

The Innovation Campus will be built in Alexandria’s Potomac Yards neighborhood on a 65-acre mixed-use site owned by Houston-based Lionstone Investments, which will co-develop the campus with JBG Smith. It will have direct access to the new Potomac Yard Metro station, which is expected to open in 2022.

In August, 175 construction firms packed a meeting seeking proposals for the campus’s first project, a 300,000-square-foot academic building that should open in 2024.

“All the infrastructure is there, but we are rebuilding a city,” says Stephanie Landrum, president and CEO of the Alexandria Economic Development Partnership. “Usually planners look 10 to 15 years out,” but this time, she says, “we are planning for the next 100 years.”

“We have a long way to go,” says Clower.

Still, the Innovation Campus, Amazon HQ2 and Tysons will be linchpins in the transformation of the region into “high-density, walkable parcels driven by a knowledge economy,” Leinberger says.

“NoVa used to be second-tier in the tech world,” he says. “It is moving up to first-tier now.”