The Broadway blockbuster “Hamilton” generated more than $1.2 million in admissions taxes for Norfolk during its monthlong engagement at Chrysler Hall in December 2019. However, city officials warn that similar productions could bypass Norfolk unless the theater undergoes major renovations.

City Manager Chip Filer has proposed $76 million in upgrades, including adding loading docks, expanding the box office and concessions spaces, updating the sound system, adding women’s restrooms and installing a center aisle to make it easier for patrons to reach their seats. Renovations could begin in 2023 and are expected to take 18 to 24 months, during which Chrysler Hall would be closed, with some shows performed at the Harrison Opera House.

Refurbishing the 50-year-old performance hall would ensure it continues to draw touring companies from major Broadway productions, Filer says. “Larger shows like ‘Hamilton’ and ‘The Lion King’ need multiple bays for loading and unloading sets and equipment. As shows get larger, we are becoming increasingly concerned that if we don’t make renovations, some of those shows will pass us by.”

To help underwrite the project, Filer has proposed using $40 million of the city’s $154 million in federal American Rescue Plan Act funds. About $30 million would come from the city’s 2019 capital improvements plan, historic tax credits and philanthropy. City Council was expected to vote on using the ARPA dollars by early February. If council rejects Filer’s proposal, the refurbishment would become part of the city’s annual budget process in the spring.

“We have to do the project so we don’t lose shows,” Filer says. “Chrysler Hall is an anchor experience venue in the city. If an individual buys an experience, including a hotel room, a night out for dinner and tickets to a performance, that generates about $50 in local revenue.”

The 2,500-seat Chrysler Hall has the largest seating capacity of the region’s performance venues, says John Rhamstine, director of SevenVenues, which manages the theater. “For that reason alone, we get most of the touring theatrical shows. Some of the biggest touring shows in the country have played our building, and that creates a financial engine in downtown Norfolk.”

Rhamstine notes that downtown restaurants were booked to capacity and parking facilities filled during the “Hamilton” performances. “It becomes a tourist destination and a very important part of what the city’s budget is built on every year.” 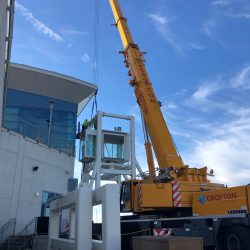