Late Tuesday, a Chesapeake Walmart manager shot and killed six people, wounded at least six more and then killed himself, police said. According to police and media reports, all six of those slain were Walmart employees and two were killed in the break room.

On Wednesday, Walmart’s corporate office released a statement confirming that the shooter was Andre Bing, 31, an overnight supervisor who had worked at the store, located at 1521 Sam’s Circle, since 2010. Armed with a 9mm handgun and several magazines he purchased from a local store the same day, Bing was found dead of an apparent self-inflicted gunshot wound in the Walmart break room, according to Chesapeake Police. One of the victims was a 16-year-old boy. Police responded to the shooting at 10:12 p.m. Tuesday and there were about 50 shoppers in the store at the time of the attack.

“The devastating news of last night’s shooting … at the hands of one of our associates has hit our Walmart family hard,” Walmart president and CEO Doug McMillon said in a statement Wednesday. “My heart hurts for our associates and the Chesapeake community who have lost or injured loved ones.”

Walmart released a further statement, saying the company was “working swiftly to provide resources to the community and our store associates, and we are continuing our work to create a safe experience for associates and customers in every store.”

Workplace shootings make up 31.5% of U.S. mass shootings — typically defined as three or more people shot by another person in a single incident — in a study of shooting events between 1966 and 2022 conducted by The Violence Project, a nonprofit, nonpartisan research center that maintains a national database of mass shootings. This year, as of Nov. 23, according to the Gun Violence Archive, there have been 607 mass shootings in the United States, including 36 mass killings.

Speaking Wednesday morning when details about the mass shooting, including the motive, were still unknown, Dr. Rebecca Cowan, a Virginia Beach licensed professional counselor who served on a state commission that investigated the 2019 Virginia Beach municipal office mass killing, says that some workplace shooters “may have some sort of grievance, whether that’s rooted in reality or perceived. Sometimes people have paranoia and feel like people are talking about them.”

Mental health is usually one of multiple factors in such incidents, she added. Relationship troubles, money issues and childhood trauma can also contribute to violent events, Cowan noted.

Chesapeake Police later confirmed that a “death note,” which contained paranoid ramblings and religious references, had been found on Bing’s phone. In the letter, he expressed worries that management was plotting to fire him and claimed employees had “harassed” and “mocked” him.

“The associates [orchestrated] it they laughed and made subtle code speeches which I eventually figured out,” Bing wrote. “The associates gave me evil twisted grins, mocked me and celebrated my down fall [sic] the last day. That’s why they suffer the same fate as me.”

Unlike mass killings of victims unknown to the shooter, workplace shootings are considered “targeted attacks,” Cowan said, and shooters may take their time planning attacks. Sometimes that results in “leakage,” a term relating to a shooter hinting at their plans ahead of time, whether to friends or family, or on social media. Anonymous reporting mechanisms like tip lines, she said, could help workplaces prevent future violence.

Jaclyn Schildkraut, interim executive director of the Regional Gun Violence Research Consortium and an associate professor of criminal justice at the State University of New York Oswego, sees parallels between school shootings and workplace shootings. Both often involve perpetrators with close connections to the locations — either former or current workers or former or current students in many cases, she says.

“They understand the patterns of activity, the security. It’s someplace that’s familiar, so it might kind of break down some of the tension of scouting someplace new,” she said Wednesday.

“We do know that mass shootings have increased over the past several decades,” Schildkraut said. “The challenge of answering the question, ‘Are workplace shootings specifically increasing over the past several years?’ [is that] we had a lot of workplaces closed because of COVID.” However, the Gun Violence Archive, which bases its data on incident reports from 7,500 sources, reports that there were 611 mass shootings in 2020, up from 417 in 2019.

Even without firm stats, many people in the U.S. feel the impact of frequent mass shootings — including in Virginia, where a University of Virginia student shot five fellow undergrads last week, killing three U.Va. football players. Tuesday’s killings also made some Hampton Roads residents recall the 2019 massacre in Virginia Beach, another workplace shooting in which DeWayne Craddock killed 12 people, many of whom were his co-workers, before he was shot and killed by police.

In that case, the FBI was not able to land on Craddock’s motive, acknowledging in a report, “The evidence is clear that the suspect was a very private person who shared little personal information or feelings with co-workers. Despite exhaustive investigative work and in spite of unsubstantiated rumors and accusations, it appears we may never know why he committed this heinous act.”

Schildkraut said there are no national statistics on how common it is for a manager or a supervisor to kill co-workers, as in Chesapeake. Cowan acknowledged the lack of broad data and noted that no matter what position a shooter holds at a business, “It really depends on the grievance and what is happening.”

Aside from COVID temporarily shutting down some businesses and more people working from home, Cowan said that more people have reported experiencing suicidal ideations since the pandemic. According to The Violence Project, about 31% of mass shooters said they experienced suicidal feelings before an attack, and 59% of mass shooters died at an attack scene.

Chris Stuart, vice president of Norfolk-based security firm Top Guard Security, noted that another common pandemic-era factor at many workplaces — labor shortages — has ramped up stress. “They’re blessed just to have the 66% of staff in that day,” he said of many businesses, and being shorthanded could mean “there’s a higher risk of [violent] situations.”

Many potential corporate clients begin with asking Stuart about hiring armed guards for their businesses, but after conversations about the clients’ goals, most wind up hiring unarmed guards, he said. “If you hop in your car and you’re on the interstate and you see a state trooper, whether you’re speeding or not, you’re going to slow down a little bit. We wear uniforms for the same purpose.” Another common security feature at workplaces is the photo ID, and businesses should be quick to deactivate IDs when a worker quits or is fired, Stuart said, adding that most workplaces have improved on that in the past decade.

There are some places — shipping docks, government buildings and other workplaces with sensitive or valuable items — that require armed protection, but that rarely extends to average commercial offices, campuses or storefronts, Stuart said. “The goal is not to add a deadly weapon.”

The industrial-zoned land is on the Southern Branch Elizabeth River 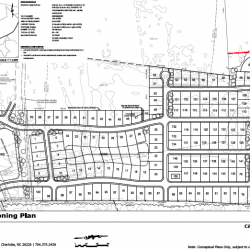 The project will have single-family houses 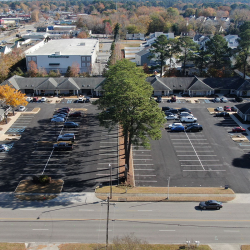