Roanoke-based Carilion Clinic and Richmond’s BRAINBox Solutions Inc. are part of a $3.5 million National Institutes of Health grant to research and develop a new way to diagnose brain injuries in the elderly.

The research will include enrolling 300 patients with head trauma and 70 patients as controls. Patients will be followed for a year and the study will run for 3.5 years. The University of Pennsylvania is also included in the award, according to a Carilion news release Monday.

Researchers will design a panel of blood markers and cognitive tests to identify brain injuries, including those with cognitive impairment like dementia. A second phase will determine the tests’ accuracy.

There were more than 64,000 deaths related to traumatic brain injuries — which include concussions — in the United States in 2020, according to the Centers for Disease Control and Prevention. Falls lead to more than half of hospitalizations for brain injuries.  People aged 75 and older had the highest numbers and rates of brain injury-related hospitalizations and deaths, accounting for 32% and 28% respectively. The injuries can often be overlooked or misdiagnosed because symptoms may overlap with other medical conditions. According to Carilion and BRAINBox, an accurate tool does not currently exist to diagnose the injuries rapidly.

“I think the surprising piece when I talk to not only patients, but the community about the type of research we are doing is, most people don’t know that it hasn’t been solved yet,” said Vice Chair of Emergency Medicine for Carilion Clinic Dr. Damon Kuehl, who is also a co-principal investigator. “Elderly patients requiring acute care visits after evidence of suspected head trauma commonly undergo a computed tomography (CT) scan. Despite most geriatric patients receiving this test, CT is very limited as a diagnostic or predictive tool in those TBI patients.”

BRAINBox has already been working on another project, with Carilion Clinic and Virginia Tech’s Fralin Biomedical Research Institute, to determine if blood biomarkers can more accurately diagnose and treat mild traumatic brain injuries through the use of a single, bedside device. While that study is not directly connected to the one announced Monday, it will build on its findings. BRAINBox CEO Donna Edmonds said the company plans to also launch a pediatric study in the first half of this year.

“We are grateful for this additional funding, which provides us the opportunity to expand our technology, clinical and scientific evidence to this important population,” Edmonds said. “With this grant, we are one step closer to our goal of developing TBI tests for all patient groups.” 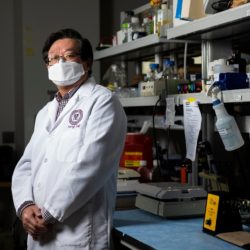