Home Other Lifestyle at home Can baseball boost the Bottom?

Can baseball boost the Bottom?

While developers seek opportunities around a proposed stadium, others question its impact

Could a new baseball stadium plopped down on a flood plain in Richmond’s Shockoe Bottom revitalize the capital city’s downtown?

Known primarily for its iconic train station, farmers’ market and busy nightlife, Shockoe Bottom has long drawn a younger crowd who flock to its restaurants and nightclubs. Recently, developers have been capitalizing on this appeal by renovating older buildings into apartments.

One drawback for commercial development is the Bottom’s location; much of the area sits in a 100-year flood plain. Richmond Mayor Dwight C. Jones, who has proposed a $200 million baseball stadium and mixed-use development, says the flood plain is what makes the project work. During a recent appearance before the Richmond chapter of Commercial Real Estate Women, Jones explained, “The ballpark allows us to mitigate some of the flooding conditions.”

Besides moving the minor league Richmond Flying Squirrels from its home on the Boulevard — a move Jones says would free up a well-located site for new development — the public/private stadium project calls for new commercial development in the form of apartments, (as many as 750), office space, a 120-room Hyatt hotel, a 65,000-square-foot Kroger grocery store, and $30 million for a museum and historical site commemorating the area’s dark past as a slave trading center.

Since introducing his proposal last November, the mayor’s plan has encountered many delays. The latest is a city-backed archeological initiative favored by history advocates that could take up to two years and slow  Jones’ plans to have the Squirrels playing in a new stadium by 2016.  The move, however, could help blunt opposition that seemed to be gathering steam in March. That’s when opponents launched an organized ballot initiative for the November general election. It calls for the city to create a historic review commission and lower the number of council members — from five to three — needed to seek a nonbinding advisory referendum on stadium and arena projects.

Even the descendants of Solomon Northup, whose autobiographical account of being kidnapped as a freeman and sold into slavery was adapted into the 2014 Oscar-winning film “12 Years a Slave,” have jumped into the fray. They oppose a stadium being built in the area where Northup was believed to have been held in a slave jail.

If the project is approved despite concerns about mixing baseball with a slave trade heritage site, the question becomes: What impact would it have on Shockoe Bottom and the region as a whole?

Developers like the Midlothian-based Rebkee Co. already have scooped up four parcels near the stadium’s proposed location at 17th and East Franklin St.  The company closed on four parcels for $1 million shortly before Jones announced his plans.

City officials hope the ballpark development would jumpstart retail, which is sorely lacking downtown. “We have a very successful downtown with office and law firm space,” says Lee Downey, the city’s economic and community development director. “But over the years we’ve lost our retail and manufacturing. We see the Shockoe plan as really impacting our ability to diversify, to bring meaningful retail back into the city.”

Unlike many stadium projects, predicated on the hope that development will grow around a ballpark, he notes that this stadium is the anchor of a larger mixed-use complex.

Developers including Raleigh, N.C.-based Highwoods Properties and Richmond-based Historic Historic Housing LLC have committed tentatively to the project.
Paul Kreckman, who heads up Richmond-area operations for Highwoods — the largest property owner in Henrico County’s Innsbrook Corporate Center — says the company is in discussions to develop an office complex north of the ballpark on East Broad Street but only if the city builds the ballpark, commits to offices being part of the development and an appropriate tenant or tenants commit to a lease.

The project’s public costs are expected to be $80 million. They include  the baseball stadium and infrastructure improvements, including upgraded flood control, along with $5 million in public money for the slave history sites. The costs would be funded initially through public debt service incurred by the city economic development authority. Of that amount, the stadium itself would take $56 million. The debt, Downey says, would be repaid via a combination of tax revenue from the new developments and $1.7 million in annual rent from the Squirrels (roughly 20 times the amount of the team’s current rent).

The city isn’t offering incentives or tax abatements. Estimates of about $125 million in private investment would cover apartments on both sides of East Broad Street, the hotel, office space, grocery store and a parking deck.

As a general rule, minor-league baseball stadiums aren’t winning economic development propositions, says Andrew Zimbalist, an economist who’s studied the issue at Smith College in Massachusetts. “If the finance deal is relatively equitable, the best you can expect is to break even economically,” he says.

“The main benefit would be cultural and social. You’ve got wholesome summertime entertainment for your population, and perhaps it creates some basis for socializing and unity and identity within your community.”

That seems to be the case in Virginia Beach where city officials hope a privately financed $40 million, 5,000-seat stadium scheduled to open in 2015 for the city’s as-yet-unnamed Atlantic League team will both improve the region’s quality of life and spark tourism.

As part of a deal reached with the city, Virginia Beach Professional Baseball LLC will add four softball fields and 13 youth sports fields to the city’s Princess Anne Athletic Complex. Virginia Beach will accelerate plans for upgrading road infrastructure to the site and will offer some tax abatements.

With the addition of the new fields, “we’ll be able to attract much larger national tournaments. … That’s going to be a fantastic opportunity to host youth and adult tournaments, which will generate heads and beds: hotel taxes, restaurant taxes and bring more people into the resort city for vacations,” says Michael Kalvort, the city’s parks and recreation director.

Another concern Zimbalist raises is the fact that baseball stadiums usually hold games for only about 70 days a year. If the ballpark’s dark for the rest of that time, that creates a problem for surrounding businesses that depend on the foot traffic.

Todd “Parney” Parnell, chief operating officer for the Flying Squirrels, says he’s confident the team could keep a new stadium hopping year-round with festivals, concerts and other community events that are more difficult to stage at the team’s current home, The Diamond.

After all, the Squirrels, the Double-A affiliate of the San Francisco Giants, have consistently exceeded the attendance figures of the city’s previous team, the Triple-A Richmond Braves, by creating a family-fun, party atmosphere with live music and fireworks displays.

The Squirrels have drawn an annual average of about 446,000 fans to the Diamond for the last four years. In the Richmond Brave’s final four seasons, they averaged about 328,000 attendees per game. After moving to Georgia, the new Gwinnett Braves have drawn around the same numbers, fewer than expected by Gwinnett County officials who built a $64 million stadium to attract the team.

“We’re a whole lot more than a baseball team to the Richmond community,” Parnell says, noting that his team is based on a model of community involvement and family-friendly experiences. The Squirrels sponsor food, clothing and baseball equipment drives for the needy and host youth sports camps among other charitable activities. “We’re an event that surrounds a baseball game. … People come to us to have a good time.”

There’s been talk about building a stadium in Shockoe Bottom since at least 1975. The Braves left in 2008 when plans for replacing the aging Diamond stalled. The city has discussed demolishing the ballpark and opening the site up to proposals for mixed-use development.

If the mayor’s plan comes to fruition, the Shockoe and Boulevard developments could be transformative. “To me, this really isn’t about baseball; it’s about economic development,” Kreckman says. “It’s about smart land use.” 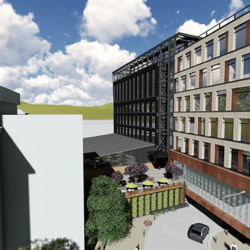