On a warm March day, auctioneer Tim Dudley’s rapid-fire patter rings out over a loudspeaker to a small crowd of about 50 people gathered on a grassy meadow in front of a clapboard 19th-century farmhouse.

At one time, the house was a pristine white. Now, after years of disrepair, large swaths of bare, weathered gray wood peek through  the home’s peeling paint.

Still, 25 people have registered to bid on this sprawling, 288-acre historic farm in Gordonsville that has fallen into bankruptcy. It’s being sold at auction by Richmond-based Motleys Asset Group on behalf of the loan holder, Colonial Farm Credit of Mechanicsville. A private buyer originally purchased the farm estate for $900,000 in 2006 but couldn’t keep up the payments so Colonial Farm foreclosed on the property, necessitating the auction. (The property owner in the foreclosure must consent to holding the auction on the property site, otherwise the auction is held at the local courthouse.)

After six minutes of steady, incremental bidding, the auction slows to a stop. Dudley exclaims, “It’s been sold for $755,000!”

The winning bidder is cattle and hog farmer Charles S. Rosson, who bought the property with his son, Charles A. Rosson. He has been eyeing the property for years.  “I’ve got cattle across the road here,” he says. “We just need extra land for livestock.”

Like other registered bidders, the Rossons had to bring a $25,000 certified check as an initial deposit to qualify for the bidding. A 10 percent deposit is due within 10 days after the auction, and the deal must close within 30 days. In addition to the Rossons’ bid of $755,000, they also must pay a mandatory 10 percent buyer’s fee of $75,500 to Motleys. As the trustee selling the property, Colonial Farm Credit had already paid all delinquent taxes on the farm prior to the auction.

“You have 25 registered bidders looking to buy a farm that’s [valued] almost at a million dollars. That’s good for all of us,” says Dudley, vice president of SVN Motleys, the commercial real estate brokerage division of Motleys. “That’s letting people know that the economy is starting to turn back again.”

Increasingly, auctions are being used to sell not only residential properties in Virginia but also commercial and agricultural real estate and high-end historic properties.

“We’ve seen a big increase [in commercial sales] over the last, I’d say, 10 years,” says Motleys CEO Mark Motley. In his industry, he adds, the preferred term for auctions is “accelerated sales.”

Though real estate auctions are a popular and accepted sales tool in nations such as Australia and New Zealand, people in the U.S. have long attached a stigma to auctions — largely a holdover from foreclosure auctions in the Great Depression. In the past, buyers might think an auction signaled that a property was distressed or damaged. Now buyers and sellers are becoming more educated about the auction process and are more willing to participate, Motley says.

Marketing and advertising
For sellers, full-service real estate marketing and auction firms such as Motleys offer more than just auctioneering; they conduct targeted marketing campaigns, create slick advertising and actively seek out buyers they believe would make a good match for the property.

“The actual auction is a very small portion of what we do,” says John S. Nicholls, president-elect of the National Auctioneers Association and CEO of Fredericksburg-based Nicholls Auction Marketing Group. “We consider ourselves an accelerated marketing firm. Everything culminates in the auction event. … Marketing is everything. The auction only takes 10 minutes on these deals but it takes 90 days of meetings planning the event.”

In February, Nicholls’s firm facilitated the $1.7 million auction of two historic buildings that were previously the home of the Fredericksburg Area Museum and Cultural Center. Conducted in cooperation with Cushman & Wakefield, and Thalhimer, the auction attracted a crowd of 120 people and 10 registered bidders. No plans have been announced by the winning bidder, LaPlata, Md.-based Battle Creek Construction, but Nicholls says he’s heard that the buildings may be developed as a mixed-use property combining office space, residential units and dining.

“This project screamed that it needed a guerilla marketing campaign,” Nicholls says. “It screamed that it needed to be an event, and that’s what we brought to the table. We did a huge guerilla marketing campaign and targeted marketing, and that culminated with 120 people at the auction. … How long this could have languished on the market with a traditional [real estate listing], who knows? There’s really no impetus to act on a static listing. We give them an impetus to act, knowing that an event is taking place. The looking and waiting is over.”

Jon Gollinger, CEO of Accelerated Marketing Partners in Boston, says, “It’s a very powerful tool if you can bring the market to a property. … If you have 10 bidders on something, you can be pretty confident you’re going to achieve fair market value.”

Offering a “once-in-a-lifetime opportunity” to get a better than usual deal on a property “creates a very strong incentive for individuals within the marketplace to bid,” he says. “If we can get three to four bidders per property … then we feel comfortable that the market is going to deliver a fair market value. Now we may not like that value, but we can be sure we’ve delivered market value by creating that kind of competitive market.” 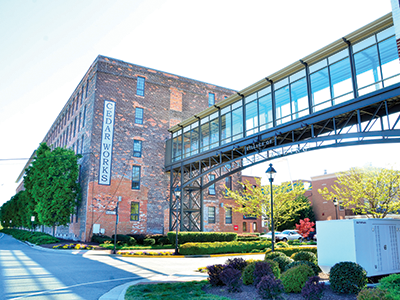 Gollinger’s firm auctioned off 29 condominiums at the riverfront community of Rocketts Landing in 45 minutes in 2014, bringing in $7.3 million. “We were very happy,” says Rocketts Landing developer Jason Vickers-Smith, CEO of the WVS Cos. “We were able to sell out all our remaining inventory we had at Rocketts Landing.”

Not long after development began at Rocketts Landing in eastern Henrico County,  the market went into recession, recalls Vickers-Smith, and his company was faced with carrying costs such as property taxes, maintenance, construction loan interest and homeowners’ association fees on unsold units while waiting for the market to improve. “By doing the auction, we were able to really accelerate the sales,” he says. “In all likelihood it would have taken us two to three years to get the same numbers by conventional methods.”

An auction isn’t a good match for every property. Yet it’s a good vehicle to induce sales when the market is slow or you’re selling a unique property without comparable properties in the market, such as a historic mansion or farm, Gollinger says.

In some cases, like with GOP frontrunner Donald Trump, a bidder can pick up properties at auction for a steal. In 2012, Trump bought Albemarle House, the former home of John and Patricia Kluge, for $6.5 million. The 45-room, Neo-Georgian mansion, built by the late John Kluge — a billionaire media mogul —originally was listed at $100 million.

Trump swooped in after the creditor for the property repossessed the home just outside Charlottesville and filed a foreclosure lawsuit after Patricia Kluge, who acquired the house in a divorce, defaulted on millions in loans. (Trump’s big bargain may have less to do with the art of the deal and more to do with the fact that he bought up all the surrounding property, including the mansion’s front yard, virtually ensuring no one else would bid on the house.) The property, now operated as a boutique bed-and-breakfast, is part of the Trump Hotel Collection.

Before buying Albemarle House, Trump purchased Patricia Kluge’s winery, also on the property, for $6 million at a foreclosure auction. It includes hundreds of acres in a private setting with spectacular scenery.

For large, high-dollar commercial properties, though, an auction usually isn’t the best way to go. In March a foreclosure auction of the $185 million James Center office complex in Richmond was canceled at the eleventh hour.

“This sale in Richmond would have been the largest foreclosure I have ever done in 35 years,” says attorney William H. Casterline Jr. of Blankingship & Keith PC in Fairfax, who represented the James Center’s mortgage holder.

He can’t speak to the specifics of the James Center other than to say registered bidders would have had to bring a $5 million deposit to the sale. In most cases, however, Casterline says, the lender will form a special entity to purchase a high-dollar property like an office park from itself and then market the property through traditional commercial real estate channels.

“You rarely find purchasers willing to buy a multimillion-dollar property at a foreclosure [auction] and that’s because foreclosures are distressed sales. They occur very quickly and all the normal sorts of due diligence you do in commercial real estate are reduced,” he says. “The field of potential buyers is fairly small and their opportunity to do due diligence is just so restricted that we don’t see too many third-party sales at this level.”