By signing a legally binding development agreement Thursday for a resort casino at the former Dan River Mills industrial complex in Schoolfield, Caesars Entertainment Corp. has guaranteed a minimum of $5 million in gaming tax revenue each year the casino is in operation. Voters will decide in November whether the project will move forward.

“Caesars Virginia will be a world-class resort that will create new jobs and revenue for the city, and we are confident that Danville will show its enthusiasm for the casino referendum vote on Nov. 3 by voting ‘yes,’” Caesars Entertainment CEO Tom Reeg said at the signing ceremony held Thursday at Averett University’s Pritchett Auditorium.

On Aug. 7, Danville Circuit Court Judge Joseph Milam issued an order that would officially place a local referendum on casino gaming on the Nov. 3 General Election ballot in Danville. Caesars Virginia, a subsidiary of Caesars Entertainment Corp., proposed a $400 million casino at the former Dan River Mills industrial complex in Schoolfield. The casino is expected to create 1,300 jobs, which was confirmed under the agreement signed Thursday.

“From the beginning, we have taken seriously our responsibility to make sure that — should the citizens of Danville vote in favor of casino gaming — it would be implemented in the best possible way,” Danville City Manager Ken Larking said during the ceremony.

The casino resort is set to include restaurants, bars, a 300-room hotel, a 350,000-square-foot conference center, a 2,500-seat entertainment venue, a pool and a spa. Construction for the casino will generate 900 construction jobs during the construction, according to the agreement.

“This is a big step,” Danville Mayor Alonzo Jones said. “This agreement assures that this project will be of the highest quality, producing good-paying jobs and bringing much-needed revenue to the city.” Under the agreement, Caesars will pay the city $15 million.

By year three of operation, it is expected that the project will produce $12 million in supplemental payments to Danville and $4.2 million in meals, sales, hotel/motel and property taxes, according to Caesars’ estimates. 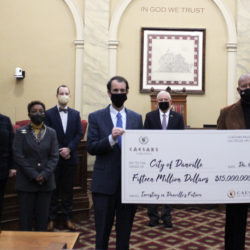