Lynne Johnston’s business, All City Cab Co., took a hit from the pandemic. But when the city of Virginia Beach started offering free door-to-door rides in one of her busiest zones — the Oceanfront — during tourist season, it was like another punch to the gut.

This year, Virginia Beach contracted with Miami-based microtransit service Freebee to run a $550,000, yearlong pilot transportation service in the city’s resort area. Freebee’s fleet of five, all-electric Teslas operates daily from 11 a.m. to 11 p.m., providing free on-demand rides via an app, with a model similar to Uber or Lyft.

At the end of the year, the city will evaluate the program’s impact on traffic congestion and decide whether it should be continued. “The goal is to get people to the resort area more efficiently,” says Virginia Beach Parking Manager Rob Fries. “It’s definitely exceeded expectations.”

In June and July, Freebee picked up a total of 16,200 passengers, Fries says.

Johnston estimates she lost about 40% of her Oceanfront business after the city began offering Freebee service. She’s cut back on the number of cabs she sends there. Other local cab companies are also unhappy with the situation, she says.

Some beach business owners, like Kristina and Tim Chastain, owners of contemporary gastropub Esoteric, encourage customers to use Freebee. “It’s an extremely positive thing for Virginia Beach,” Kristina Chastain says. “It’s forward-thinking and nice to be on the cutting edge. Our guests enjoy the experience of it, as well as the utility.”

“It doesn’t make sense for the city to put a service out there that competes with businesses that are already paying licensing fees to operate transportation services,” she says. It wouldn’t be much different from the city opening a hotel and offering free rooms, she says.

Fries doesn’t see it that way. He says Freebees go short distances, unlike cabs, which he says often go across town. Fries also says that Freebee provides “a level of equity,” being free to any rider, ranging from tourists to “economically disadvantaged” locals.

But Johnston says that by moving out of fixed-route mass transit into point-to-point ride services, the city is now essentially in the cab business, subsidizing a direct competitor.

“They’re literally taking money out of the hands of people who are trying to feed families,” she says.

Elizabeth Cooper contributed to this story. 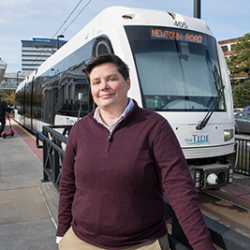 Laying tracks for The Tide 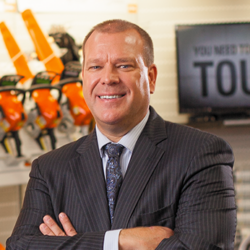