Tanner Johnson, CEO of Pure Shenandoah LLC, says that his Elkton-based company is trying to bring hemp back to its Shenandoah Valley roots. After all, he explains, “back in the 1600s, this area was used heavily for hemp production and rope and clothing.”

Johnson is one of four brothers behind Pure Shenandoah, which seeks to create a market for hemp fiber, the pliable male variety of the cannabis plant. The family business already deals in the potent female CBD strain, selling recreational oils and applying to the state to become a medical marijuana grower.

“The fiber side has almost unlimited potential,” Johnson says. “It has 20,000-plus uses, from clothing and paper to packaging materials. You can even build a house with it.”

Sourcing nearly exclusively from area farmers, Pure Shenandoah expects to plant 1,400 acres of hemp fiber this year. By comparison, only 2,000 acres were grown in all of Virginia in 2020.

In August 2020, Pure Shenandoah opened a $3.3 million hemp processing facility in Elkton’s historic Casey Jones building. This year, it plans to retrofit part of an existing 200-acre farming operation into a full-fiber endeavor for $1 million, including the conversion of four poultry structures for hemp processing. It plans to lease 100 acres at the Elkton site this year, and eventually purchase the entire farm. It also aims to pick up an important client — Waynesboro’s Old Dominion Hemp Co., the country’s leading animal bedding distributor.

Samuel Morton, an associate professor of engineering at James Madison University and lead faculty member of JMU’s Industrial Hemp Research Program, says Pure Shenandoah may prove more successful than previous commercial attempts: “They are using all parts of the plant. On an economic basis, you have to do that.”

Glenn Rodes, a partner in the family-owned Riverhill Farms in Rockingham County, obtained Virginia’s first hemp fiber growing license and serves as unofficial adviser to Pure Shenandoah. “They are the only ones really pursuing [hemp fiber], and it’s a tough business right now. The regulatory side is still uncertain, and we are definitely going to need local markets to buy the product. Hemp fiber is bulky and would be difficult to ship long distances relative to its value.”

What isn’t a problem is growing the hemp, Johnson says. “The soil, the climate, it is ideal here in the valley. It really flourishes, and that’s a major competitive advantage.” 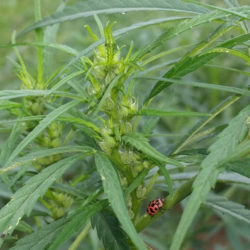 Pure Shenandoah to source all hemp from Virginia