The state-straddling Birthplace of Country Music is building its downtown

Downtown is where it’s happening in Bristol, a community that straddles the state line between Virginia and Tennessee.

Sure, outside of downtown, Bristol has big retail centers and a manufacturing plant that’s reopening after two years of idleness. Sunset Digital, which is buying Bristol, Va.’s OptiNet internet service, plans to spread broadband throughout the region, but that’s lots of work away. 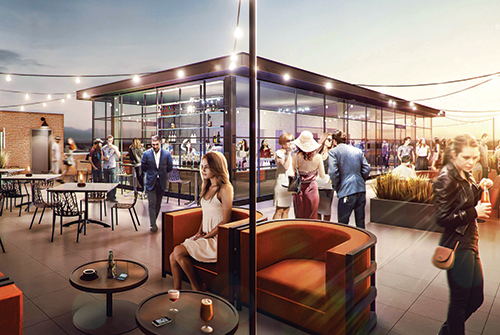 But things are happening downtown now. The Bristol Hotel, a 93-year-old office building being converted into a boutique hotel, is set to open by summer’s end. Lost State Distilling, a maker of rum, gin and Tennessee whiskey, aims to open about the same time, just before this year’s Rhythm and Roots Reunion festival. The Sessions Hotel, a boutique hotel at the opposite end of State Street from the Bristol Hotel, plans to open next year.

“I think it’s really important to realize Bristol has some momentum,” says Maggie Bishop, executive director of Believe in Bristol, an organization promoting the shared economy of the twin cities, Bristol, Va., and Bristol, Tenn. “With these new hotels and the new distillery, it’s going to bring in a whole new clientele.”

The new development won’t just draw people downtown; it will give those people something they don’t have now — a place to stay.

“With those two hotels, it’s going to change our downtown drastically and Bristol drastically. Right now, we don’t have any lodging in our downtown district. Basically, all our lodging is on the interstate [I-81],” Bishop says. “Those hotels bringing people to the heart of our community is going to be amazing for us, so we’re really excited about that.”

The Sessions Hotel plans include renovating and repurposing three buildings constructed between 1915 and 1922 into a 70-room hotel with two restaurants, an outdoor music venue, rooftop gardens and a rooftop bar.

The Bristol Hotel will have a rooftop bar, too, and one restaurant to go with its 65 rooms, including a 1,200-square-foot penthouse. Both hotels plan to have spas.

1927 recording sessions
Tax credits available for historic renovations are part of what’s shaping these developments. Yet Bristol also may be motivated by the historically important Taylor-Christian Hat and Glove Co., a  building that’s already been lost. That building already was empty when Victor Talking Machine Co. producer Ralph Peer set up his traveling recording studio there in 1927. During July and August of that year, Peer recorded more than two dozen groups and performers, including Pop Stoneman, the Carter Family and Jimmie Rodgers. 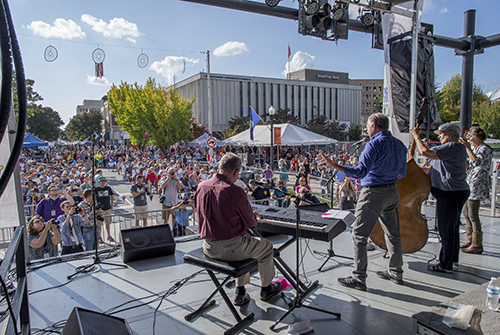 The region has leveraged that designation and its affiliation with The Crooked Road, Virginia’s heritage music trail, into an identity that took physical form when the Birthplace of Country Music Museum opened in 2014. The same nonprofit that operates the museum hosts the Bristol Rhythm and Roots Reunion, an annual three-day series of concerts — about 130 bands on 20 stages in downtown — that brings about 45,000 people and more than $16 million to the region each September.

Downtown Bristol has been busy collecting and promoting the kinds of things that draw people between festivals — coffee shops, craft breweries, live music, artisans and galleries — and it seems about to collect another.

Nick Bianchi and his father, Joe, closed on the Bristol Supply and Equipment Co. building in April. By September, they hope to be brewing and selling gin, rum and Tennessee whiskey (the building is on the Tennessee side of State Street) in the 113-year-old building. It takes more than geography to make Tennessee whiskey, according to Nick Bianchi. It’s essentially bourbon that’s filtered through sugar maple charcoal before it goes into barrels for aging. Lost State’s first whiskey will skip that time in barrels, Bianchi says. It will be “white, unaged whiskey.” But don’t call it moonshine.

Lost State won’t be a bar, either, Bianchi says, but it will offer cocktails and live music in its 4,000-square-foot tasting room. It’s across the tracks from the Bristol Train Station, a 116-year-old train depot-turned-event-center that’s on the National Register of Historic Places.

Seeking Amtrak service
While Lost State and Rhythm and Roots may attract people downtown, the region is working toward getting Amtrak to literally bring people downtown. Long a goal of many in the region, restoration of passenger service has seemed tantalizingly close since trains began carrying people to and from Roanoke regularly last fall. That’s about 150 miles away by rail or interstate.

“It’s looking more and more plausible,” Bishop says. “It just makes sense. It’s just going to be more money for the state and our community. We’re hoping that it’s sooner than later, though.” 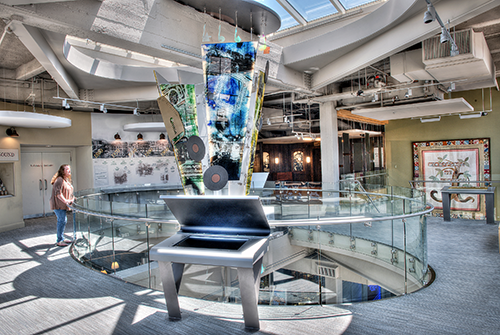 Championing train travel and renovating hundred-year-old buildings may give the impression Bristol is looking to its past for economic salvation. While selectively and strategically leveraging its history, however, the region isn’t bound to the past. An economy once tied to coal and railroads has a much broader focus. There’s The Pinnacle, a million-square-foot retail center on the Tennessee side, whose first big tenant, Bass Pro Shops, opened the same month as the Birthplace of Country Music Museum.

The Falls, on the Virginia side, features outdoor outfitter Cabela’s and discount grocer Aldi’s and is about to get a Hobby Lobby.

The former Ball can factory, which employed more than 200 people when it closed in 2015, is scheduled to begin producing towels for a Chinese company called American Merchant by January, eventually providing more than 400 jobs.

Even Bristol Motor Speedway (BMS), a steady contributor to the regional economy since it hosted its first NASCAR race in 1961, is looking to adjust and innovate. NASCAR attendance is down. (Admission revenue for Speedway Motorsports Inc., BMS’ parent company, was down $3.7 million, 4.1 percent, last year, “due primarily to lower overall admissions revenue at certain NASCAR racing events” at its eight racetracks, according to the company’s annual report.)

BMS hosted two collegiate football games in 2016, most notably the Battle at Bristol between Virginia Tech and the University of Tennessee. That game drew almost 157,000 fans, making it the highest attendance at any football game, collegiate or professional.

A ‘quirky situation’
Regional cooperation seems to be growing — a trend that hasn’t always been common in Virginia — but Bristol is a special case. The cross promotion and cooperation has to extend not just across county and city lines, but state lines, too.

“We’re in a quirky situation with that,” Bishops says. “It has its challenges.” It also has its advantages, she says. For instance, Believe in Bristol can apply to two states for downtown improvement grants. But Bishop’s vision stretches far beyond State Street. She promotes the two Bristols by also promoting what’s nearby — South Holston Lake, the Creeper Trail, the Barter Theatre, the Appalachian Trail. Bristol’s not even that far from Asheville and Roanoke, she says: “We’re just kind of smack dab in the middle of some cool stuff.”

Bianchi says that while the location and the festivals attracted him and his distillery, it was the people and local government that really drew him in. “The people that work with the city of Bristol were the main drive that pushed us here,” Bianchi says, “because they have been so supportive of everything we have done. They have been amazing. They’ve kind of bent over backwards to help us get in here.”

Like them, Bianchi, a health-care IT consultant who’s about to become a distiller, is thinking about the future. It’s part of why he’s making a career change.

“The biggest thing is owning a brand,” he says. “You have a job. You have a career. Well, that’s fantastic. You go on and you retire. What do you have left over? You’ve got whatever you have in your retirement.

“This, we establish a brand, and that becomes a lineage. So, I get to pass on to my children the Lost State brand, and they can pass it down to their children and hopefully not sell it off after all that work. But, either way, it’s more lasting of a life goal than you would get with your normal eight-to-five.”