Chief Operating Officer Timothy Faulkner has been promoted as the company’s next president and CEO, after more than 20 years with the Virginia Beach-based company, and Breeden, who founded the company in 1961, will remain chairman of the board, maintaining an active presence at the company. Faulkner was promoted to president of property management at the same time he was promoted to COO, in 2011. The COO position left vacant by Faulkner will not be filled, however, a new president of property management will be named shortly. Breeden’s son, C. Torrey Breeden, who has worked alongside him for 20 years, will continue as The Breeden Co.’s executive vice president, focusing on land acquisition and development.

“Having created this company and serving nearly six decades in the top executive leadership role, I feel this is the right time for a leadership change,” Breeden said in a statement. “I am proud of The Breeden Co.’s executive team and the businesses we are building.”

The Breeden Co. has “experienced consistent growth over the last 10 years, in part due to [Faulkner’s] expertise,” the company wrote in a news release. Before joining The Breeden Co., Faulkner served as president and COO of Lawton Lumber Co. Prior to that, he was vice president of operations for American Coating Technologies LLC and served as a process engineer and production manager for Procter & Gamble.

“I am honored to be named the next president and CEO of The Breeden Co., and want to thank Ramon W. Breeden, Jr. and Torrey for the confidence they have placed in me to lead this strong organization,” Faulkner said in a statement. “I welcome working with the executive leadership team and benefiting from everyone’s experience as we continue to grow the company.”

Faulkner earned his bachelor’s degree in operations research and systems analysis with a minor in civil engineering from the United States Military Academy at West Point and spent four years in the U.S. Army as a platoon leader, assistant operations officer and battalion personnel officer in the 82nd Airborne Division at Fort Bragg, North Carolina.

In the decades since it was founded, The Breeden Co. has owned, managed or developed more than 15,000 apartments, 1,700 single-family homes and more than 2 million square feet of retail and office space. In 2021, The Breeden Co. broke ground on the $66 million luxury Pinnacle Apartments in Virginia Beach.

In 2010, Breeden Realty, Breeden Property Management and Breeden Construction had newly-appointed presidents, after Ramon Breeden stepped back from his role as president across all divisions. Then in 2011, The Breeden Co. launched two new divisions providing third-party construction services and third-party property management services.

Breeden started the company from the trunk of his Pontiac convertible and the back room of a grocery store and grew it from 20 employees to more than 425 today. Within the company’s first 15 years, Breeden was listed among the top 500 builders in the nation. In 2020, the company did more than $350 million in business. In 2021, the company announced a $2.4 million, 6,500-square-foot expansion of its Virginia Beach headquarters. 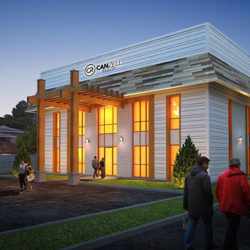