Mavalério, the largest producer of decorative confectionary products in Latin America, decided it needed to establish a base of operations outside of Brazil to serve U.S. customers. It moved slowly and prudently to consider what area offered a good business location while providing the quality of life that the family-owned business wanted.

Last April, the company announced it would locate its first U.S. production facility in Hanover County. It is investing $5 million in a 38,000-square-foot space in the Northlake Business Park along the Interstate 95 corridor. The company expects to create 55 jobs during the next few years.

Mavalério, however, might not have heard about the Richmond area had not a delegation from the Greater Richmond Partnership — an economic development marketing organization for Hanover, Chesterfield and Henrico counties and the City of Richmond — come to Brazil in 2013. The move was part of the partnership’s recently implemented “Brazilian strategy” to prospect for new businesses with the help of the Virginia Economic Development Partnership.

Edwin Gaskin, director of economic development for Hanover County, says many prospects — especially international businesses — have never heard of Richmond or any of the surrounding localities.

“So, when we market the region, we’re marketing RVA. The challenge is to be noticed,” Gaskin says. “Once we’re noticed and a prospect is interested in this region, then we as localities compete for it.”

Fernando Bettin, operations director for Mavalério, says a primary reason for selecting the Hanover site was its proximity to Interstate 95, which enables the company to reach 55 percent of the U.S. population within a 750-mile radius.

Gaskin says it would be difficult to underestimate I-95’s value to the county. “That is our lifeblood,” Gaskin adds, noting that the four interstate interchanges in Hanover drive its commercial economy. 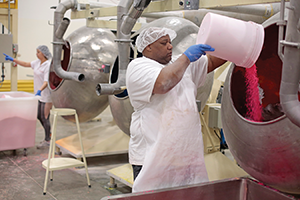 Bettin first came to the area in summer 2014 looking for a building that would accommodate the company for the next 10 years. Although there were other localities in the region that had suitable buildings, he says, none had the interstate access that Hanover offered.

The idea of establishing a U.S. production facility had been on the minds of company officials for a number of years before they decided to move forward.

Mavalério already has a number of U.S. customers, including Pepsi, Wal-Mart, Lindt and McDonald’s. It wanted to serve them better and add new customers.

“For our existing customers,” Bettin says, “we now have a lead time of like 90 days,” from the time an order is received in Brazil, processed, loaded into a container, shipped  and received in the U.S.  With a U.S. production plant, that lead time can be trimmed to a week or a matter of days.

Bettin says his customers will spend less on storage because Mavalério will be able maintain accessible inventories for them.

The Greater Richmond Partnership connected Mavalério officials with consultants. They provided the expertise the company needed for installing equipment and training its initial group of employees, now numbering more than a dozen.

Gaskin says Hanover is ideally suited for recruiting companies that start with a small workforce, providing them with the help they need as they grow.

Gaskin says 60 percent of Hanover’s businesses have four or fewer employees. “We are a microbusiness community,” he says.

“We have all of those in Hanover County. We’re comfortable building things here, and we have the workforce to support that.”

Gaskin adds that much of Hanover’s land is locked away in rural conservation.

“I’m only really recruiting up to the interstate corridors, because that’s where we have water and sewer,” he says. And because available space is limited, Gaskin says, he wants every job to be a good job.

Bettin says several other states, including Delaware, Florida and New Jersey, were eager to have Mavalério.

But he and other family members who visited the Richmond area were impressed with the quality of schools, the recreational opportunities and the fact that metropolitan, suburban and rural areas in the region are within a short drive of each other.  “This is a combination you can’t find everywhere,” Bettin says.

He says one of the biggest challenges the company has had in moving to a new country has been trying to establish relationships with financial institutions.

Even though Mavalério has been doing business with U.S. companies for decades — it was founded in 1969, and is headquartered in Sao Paulo, Brazil — it had no credit history in this country.

And that has meant self-financing nearly every aspect of its new venture, although it received $50,000 from the Commonwealth’s Opportunity Fund, as part of Virginia’s efforts to land the company.

In Brazil, Mavalério sells not only to commercial customers in the baking industry but also to homemakers. In addition, the company has chefs who regularly conduct classes showing people how to use its confectionary products effectively.

Bettin hopes to tap into the emerging trend in home baking in the U.S., which parallels the growth of local food shops and local sourcing. “The goal of the company is to be local, using American ingredients and American people,” he says.

As the second generation of his family to be involved in running the company, Bettin says he feels a heavy responsibility to represent it in the best way possible, in the products Mavalério produces and sells, but also in the manner in which it treats its employees and customers.

Coming to a new country is always full of risks, Bettin acknowledges, but he believes that Mavalério needs to take those risks.

And besides, Bettin adds, “This is the biggest candy market in the world. Why wouldn’t we come?”

Gander Mountain is coming to Charlottesville