Bon Secours St. Francis Medical Center in Chesterfield County, near Midlothian, will undergo a $108 million renovation and expansion and Skanska USA will do the work on it.

The construction will include renovations to existing spaces and adding two floors above the existing surgical department on the second floor, according to Skanska. The new third floor will have a medical-surgical nursing unit and the fourth floor will be used for intensive care beds and neonatal intensive care rooms.

The 179,000-square-foot renovation and expansion includes the addition of 55 acute care beds. Of that, about 69,000 square feet of existing space will be renovated and about 109,000 square feet will be new construction. It will increase the hopsital’s capacity to 185 beds, including expansions of obstetrical beds from 21 to 30, intensive care beds from 16 to 20, expansion of NICU from 10 open bays to 11 private rooms and three bays and expansion of medical-surgical services by adding 42 medical-surgical beds.

In the existing building, a former ICU unit on the third floor will be renovated to accommodate a 10-bed observation unit, repurposing existing patient rooms and support space. The fourth floor will be reconfigured to have a new 24-bed mother-infant unit with a well-baby holding nursery.

The project is expected to be completed by April 2024.

“St. Francis’ planned expansion is a response to an increased need for inpatient beds from patients for medical, surgical, obstetrical and intensive care, stemming in part from increased complexity of inpatient services and population growth, especially growth in the population of ages 65 and older who require more inpatient care than other age groups,” according to a December 2021 news release from Bon Secours. “This expansion will help meet a growing need for the community and will increase access to the hospital’s innovative resources, outstanding clinical staff and exceptional patient care.” 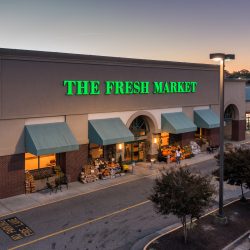