Boeing Co., the world’s third-largest defense contractor, is planning to move its global headquarters from Chicago to Arlington, the company announced Thursday.

Boeing already has a 4.7-acre campus in Arlington’s Crystal City area, which is near Amazon.com Inc.’s HQ2 campus in National Landing, and the company said it has decided to develop a research and technology hub there as it moves its global corporate headquarters to the region. Boeing did not release a time frame for the relocation.

“We also want to especially thank Gov. [Glenn] Youngkin for his partnership, and [U.S.] Sen. [Mark] Warner for his support as we worked through the process,” Boeing President and CEO Dave Calhoun said in a statement. Earlier Thursday, The Wall Street Journal reported the prospective move, noting that Youngkin has been in talks with the company for months. In 2017, Boeing announced it would move its defense unit’s headquarters from St. Louis to Arlington to be closer to the federal government and Pentagon officials.

“Boeing is one of America’s great pioneering businesses, and we are thrilled the company has decided to headquarter in Virginia,” Youngkin said in a statement. “The decision to call Virginia home shows that the commonwealth is the premier location for aerospace companies. I look forward to working with Boeing to attract even more talent to Virginia, especially given its reputation for engineering excellence.”

Boeing announced that its commercial airplane business unit will remain in Seattle, and Boeing Global Services will stay in Plano, Texas, in the Dallas suburbs.

“We are excited to build on our foundation here in Northern Virginia,” Calhoun said. “The region makes strategic sense for our global headquarters given its proximity to our customers and stakeholders, and its access to world-class engineering and technical talent.”

Warner’s office released a statement from the senior Democratic senator: “For well over a year, I’ve been making my case to Boeing senior leadership that Virginia would be a great place for its headquarters, and late last year, I was happy to learn that my efforts were successful. As the former governor of Virginia, I was proud to secure Virginia’s standing as the best state for business and the best-managed state, among other honors, and I’ve been proud to work in my role as senator to help continue to cultivate the kind of pro-business environment that world-class companies like Boeing need to grow and thrive.”

Boeing last year made a record $50 million donation to the Virginia Tech Innovation Campus to foster diversity at the graduate technology campus in Alexandria. Calhoun, a Virginia Tech alumnus, said at the time that the university “has a bold and unique vision to unlock the power of diversity to solve the world’s most pressing problems through technology…. Boeing is dedicated to advancing equity and inclusion both within our company and in our communities.”

“Boeing has been a leader in innovation and corporate citizenship in Arlington through its investments in tech talent and the overall community, making Arlington County an excellent place to live and work,” said Telly Tucker, director of Arlington Economic Development. “We are honored to work alongside Boeing and look forward to that continuing partnership as the home for its global headquarters.” 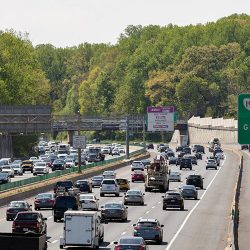