Arlington-based Boeing Co. Thursday announced a series of top leadership changes and a reorganization to consolidate its eight divisions within the Boeing Defense, Space and Security unit into four.

Boeing said the changes, effective immediately, are aimed at accelerating its operational discipline, quality and performance and at streamlining senior leadership roles and responsibilities.

According to a news release, there are four new divisions within BDS:

“I am confident this reorganization will drive greater and more simplified integration and collaboration across Boeing Defense, Space and Security,” Colbert said in a statement. “These changes will help accelerate operational discipline and program quality and performance, while stabilizing our development and production programs. These are necessary steps to put BDS on the path to stronger, profitable growth.”

In October, Reuters reported that BDS appointed Steve Parker chief operating officer in an effort to shore up money-losing defense programs as the company deals with delays and cost overruns on fixed-price contracts. Parker previously led BDS’ bombers and fighters division, and oversaw its 15,000 employees in St. Louis as a senior executive. He is now responsible for manufacturing and safety, total quality, supply chain and program management functions for BDS, Boeing spokesperson Paul Lewis told Virginia Business in an email.

As part of the announcement, Plano, Texas-based Boeing Global Services, which provides aviation parts and engineering to commercial, defense and space customers, will integrate its domestic and international government services into one organization led by Torbjorn “Turbo” Sjogren, vice president and general manager of BGS’ government services, the company said.

BDS, based in Arlington, employs about 15,000 people in 15 countries and 48 states and its revenue in 2021 was $26.5 billion. It is one of three Boeing business units. In May, the company announced it was moving its corporate headquarters to Arlington, from its previous home in Chicago. 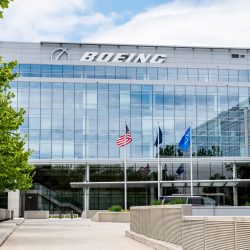 Next step in hypersonic arms race