Southwest Virginia spent last year struggling against national trends that hurt some of its most historically consistent economic drivers, yet the region managed enough job growth to keep its unemployment rates steady.

The big losses drew most of the media attention: 350 jobs lost with the closure of Home Shopping Network in Roanoke County, 426 jobs lost with the shuttering of Norfolk Southern’s Roanoke offices, 600 workers laid off at Volvo Trucks’ Pulaski County plant, and 230 jobs lost at Ball Corp. in Bristol.

Then there was the continuing decline of Southwest Virginia’s coal industry. It has been hit with a double-whammy as electrical utilities move away from coal toward natural gas while demand for metallurgical coal used in steel slumps because of China’s slowing economy. Bristol-based  Alpha Natural Resources warned of hundreds of layoffs as it struggled through Chapter 11 bankruptcy.

Those figures demonstrate the economic diversification that has occurred during the past three decades. Historic industries where closures and layoffs once would have been crippling have been supplemented by newer, technology-driven businesses. These newcomers have contributed to keeping the regional economy afloat.

Beth Doughty, executive director of the Roanoke Regional Partnership, says there is a disconnect between economic headlines and the constant simmer of economic activity that takes place out of sight.

“When something happens like a Norfolk Southern or a Volvo, it is front-page news,” Doughty says. “When people are adding jobs, which happens every day, unless they want to make it a big deal, it’s not a big deal. And to be honest, many companies don’t want to make a big deal out of it.”

Technological advances also have resulted in productivity gains, meaning that fewer people can do more. “You don’t see those blockbuster job announcements like you used to, just because technology has changed the landscape,” Doughty says.

To put it another way, there’s enough small-scale business growth — a job here, a couple more there — to offset major closures.

“The beauty of the onesie-twosie jobs is they don’t all go away at once,” says Bristol, Va., Mayor Archie Hubbard. “The others [big job announcements], everyone wants those, but when the economy goes down, they have big losses.”

Many of those large-scale job losses have resulted from seismic global economic trends over which the region has no control. The mandatory, across-the-board federal budget cuts known as sequestration hit Northern Virginia and Hampton Roads more forcefully, but their ripple effects also hurt western Virginia.

Meanwhile, coal — a historic economic driver in western Virginia — has declined due to the Chinese economic slowdown, low prices, federal regulation and competition from natural gas. 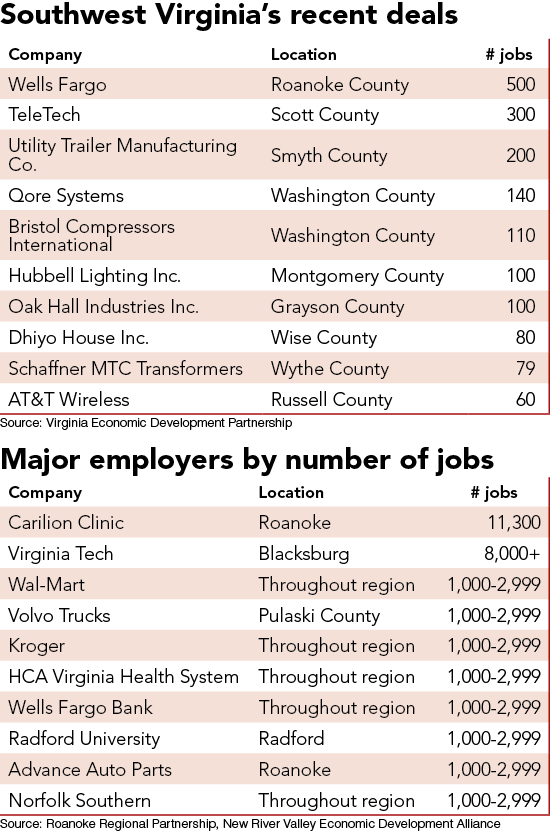 The layoff of 600 workers at Volvo came about after the announcement of two major investments in the last two years, including a $69 million, 200-job deal to create a customer-experience track in 2014 and a $38 million, 32-job deal to build a related facility in 2015. The layoff announcements weren’t tied to economic overreach, but to a decline in demand for commercial trucks across the entirety of the North American market.

Charlie Jewell, executive director of the New River Valley Economic Development Alliance, says Volvo’s recent investments will continue despite the layoff announcement and may contribute to its eventual rebound.

In the case of Montgomery County’s Hubbell Lighting, its $6 million, 100-job expansion signaled the addition of a new product, LED lighting, which helps to broaden the company’s markets even as it contributes to regional economic diversification as well.

In Salem, Yokohama Tire agreed to invest $15 million in its tire-manufacturing plant in return for a series of local tax breaks, basically amounting to a holding action to retain an 800-job employer the same year that it opened a new, $300 million commercial plant in Mississippi. Deals like this not only preserve existing jobs but often pay off in future announcements.

Bristol Compressors, for example, struggled through the early 2000s, closing its plant in Allegheny County, N.C., and laying off hundreds from another plant in Washington County. At one point in 2006, the Virginia plant was put up for sale, but governmental action, including investment by Washington County and the Virginia Tobacco Indemnification and Revitalization Commission, kept it open, saving 1,000 jobs.

This year, Bristol Compressors announced it would invest $1 million to expand its operation and create 110 jobs. “We once thought they were going to go out of business, and now they just added 100 new jobs,” says Rob McClintock, vice president of research for the Virginia Economic Development Partnership. “It was a big deal to get them back on solid footing.”

In Smyth County, Utility Trailer Manufacturing Co., which located there in 1988, announced it would expand, creating 200 jobs.

David Manley, executive director of the Joint Industrial Development Authority, says an additional 20 businesses opened in Wytheville as part of its downtown revitalization.

“Being able to not be married to one thing forever and to acknowledge when industries change has been important for Southwest Virginia,” Manley says. “No matter what you think the economy is married to today, history has shown that that can change quickly. I think part of Southwest Virginia resilience, beyond its history of being a resilient people, has been the willingness to adapt.”

In Washington County, Qore Systems, which makes antimicrobial hand sanitizer, announced it would spend nearly $13 million to move from Arizona and create 140 jobs in Highlands Business Park. Qore is opening on a pad that had been occupied previously by a company that closed after a 2011 tornado. Washington County Manager Jason Berry praised the opening as the gateway into nanotech, a sizzling sector that other regions, including the New River Valley, are seeking to develop as well.

Roanoke’s biggest 2015 job announcement came from one of the valley’s more underrated employers — banking giant Wells Fargo. Its operations center on Plantation Road — the bank’s low-key counterpoint to the Wells Fargo tower downtown — will hire 500 workers as part of an expansion.

Last year Wells Fargo issued layoffs at the operations center as part of a contraction in the home-equity section. Now it’s seeing growth in other sections, including credit cards, personal loans, and wholesale and commercial banking, says Chris Lee, a senior-level manager. Those jobs will include entry-level office positions as well as a higher-level career path.

It’s one brick in a region that’s working to build a resilient, stable economy out of an increasingly diverse set of building materials.