Here is a sample of the state’s most significant economic development announcements in 2020 and 2021. All projects are expected to create at least 100 jobs.

Chesterfield County: Carvana, an e-commerce platform for buying and selling used cars, plans to invest $25 million to establish a 191,000-square-foot vehicle inspection and reconditioning facility in the county with the potential to create more than 400 jobs. The project, announced in 2019, was delayed by the pandemic but is back on track.

The project will create 186 jobs. Also, AMPAC Fine Chemicals LLC plans to invest $25 million and create 156 jobs at its plant adjacent to the Civica facility. It’s part of a larger federal effort to secure the domestic supply chain for essential pharmaceutical drugs and ingredients.

Richmond: Aditxt, a biotech innovation company focused on improving immune system health, will establish its first AditxtScore Center in Richmond in the second half of 2021. Aditxt plans to create more than 300 jobs and targets making a capital investment of $31.5 million over three years to scale up the immune health monitoring center.

Norfolk: The Pamunkey Indian Tribe plans to break ground this year on its $500 million HeadWaters Resort & Casino, scheduled to open by late 2022 or early 2023. The Harbor Park-adjacent project is expected to create 2,000 construction jobs and 2,500 permanent jobs.

Portsmouth: Rivers Casino Portsmouth, a short drive from the Norfolk casino, is expected to open in late 2022. Operated by Rush Street Gaming, the $300 million resort is expected to create 1,400 construction jobs and 2,000 permanent jobs.

Virginia Beach: Acoustical Sheetmetal Co. announced in July 2020 that it will invest $15.8 million to expand its Virginia Beach complex by 20 acres. This June, the company opened the 100,000-square-foot facility, expecting to add 200 jobs.

Arlington County: Microsoft Corp. will expand its workforce and add 475 jobs at a newly leased office in Rosslyn, which the tech giant expects to open in mid-2022. The announcement comes a year after Microsoft said it would create 1,500 jobs at a new research and development hub in Reston.

Fairfax County: ID.me, a federally certified identity provider, expects to hire more than 1,000 new employees in Northern Virginia before the end of this year. It has opened two new offices in Tysons.

Fairfax County: Guidehouse, a management consulting company serving the public and commercial sectors, will invest $12.7 million to establish a global headquarters at Tysons. The new campus will house more than 1,550 employees at full capacity, creating 900 jobs.

Rockingham County: Dynamic Aviation Group Inc. announced in November a $48 million expansion that is expected to create more than 200 jobs, in addition to its workforce of 750. 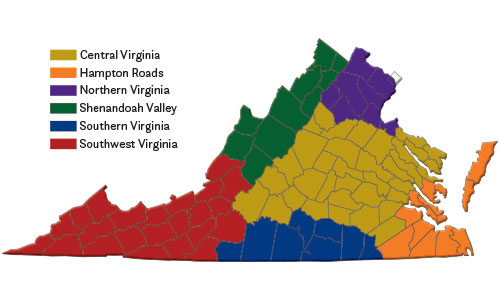 Pittsylvania: Staunton River Plastics Inc., a subsidiary of Rage Corp., will be the first tenant at the Southern Virginia Multimodal Park in Hurt. It is investing $34 million and expects to create 200 jobs over four years. Work was delayed during the height of the pandemic, but construction appears to be on track.

Tazewell County: Pure Salmon (formerly Dominion Aquaculture) will build a vertically integrated indoor aquaculture facility on the boundary of Tazewell and Russell counties. The company plans to invest $228 million and create more than 200 jobs, with opening set for 2023.