George Mason University has been a go-getter since the get-go. Although it has been around for only about 60 years, in that time, it has transformed itself from being an extension of the University of Virginia, so modest in size that its classes met in high schools and churches, to the commonwealth’s largest public university in terms of total full-time and part-time enrollment. It has three campuses in Northern Virginia (in Arlington, Fairfax and Manassas) and a budget of $1 billion.

Wanting to become bigger and better seems to be built into Mason’s DNA, and it continually seeks to add breadth to its academic and research portfolios. In recent months, it has added several notable programs and facilities.

Since the program launched in 2002, Homeland Security has created fewer than 10 of these centers of excellence, each devoted to a different, high-priority security problem. So, being chosen to lead this one — to be known by the acronym CINA — “was a big deal for Mason,” the dean says. The DHS designation also comes with a $38.5 million grant spread across 10 years.

Agouris believes that Mason prevailed over other universities because of its belief in cross-disciplinary study, as well as in the value of tapping into expertise beyond its walls. Those practices were a good fit for the fight DHS wants CINA to lead against criminals who operate in cyberspace and across borders. They include drug traffickers, human traffickers, organ traffickers, smugglers, money launderers and gangs. The CINA attack will have to be launched on three fronts — physical, cyber and social — and, Agouris says, Mason’s proposal had all three covered.

Six Mason colleges and eight other universities — including Notre Dame, Michigan State, Carnegie Mellon and Virginia Tech — will be part of the CINA effort. U.S. Immigration and Customs Enforcement and other law enforcement agencies will be part of the push, too, along with Homeland Security, of course. But, it will be Mason guiding the ship.

Anthony Stefanidis, a professor of geography and geoinformation science at Mason, is CINA’s director. Outreach and organization have occupied the first few months, he says. In May, though, CINA will conduct a symposium to begin to drill down into the four areas for the assault: criminal network analysis, dynamic patterns of criminal activity, forensics and criminal investigative processes.

“We feel insulated, but we are all connected,” Stefanidis says. “Eventually you do start to realize how close they [CINA’s criminal quarries] come to touching your life.”

Mason has no plans to stop at its CINA coup. Provost and Executive Vice President S. David Wu says the university already has entered  “the incubator phase” of a proposal for a second DHS center of excellence, this one to be dedicated to the opioid problem.

Hayden Center
CINA may have been “a big deal” for Mason, but it certainly wasn’t the only one of late.

Last fall, Michael V. Hayden, a retired four-star Air Force general  and former director of both the National Security Agency and the Central Intelligence Agency, opened a center for intelligence, policy and international security at the Schar School of Policy and Government.

Like CINA, the Michael V. Hayden Center for Intelligence, Policy, and International Security will be simultaneously academic and outward looking. 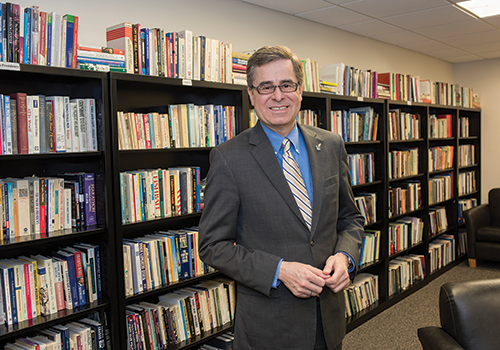 “It is an important public service to project research and analysis back out into the community,” says Schar School Dean Mark J. Rozell. “We want to try to make a difference in policy debate.”

Hayden’s clout was evident at the center’s opening last October at the National Press Club. Distinguished panelists from academia, law enforcement and the media, including James Clapper, a former director of national intelligence, spoke to an audience of 400 on a topic that will be a yearlong focus — how to defend fact-based institutions in a post-truth world.

In his opening remarks at the gathering, Hayden explained that his vision was for “a space in which people can, in a nonaccusatory way, talk about the things that are important to American espionage.

“Rarely,” he said, “has something so essential to American safety and liberty been so mis- or un-understood by the population that it serves.”

While still only months old, the Hayden Center’s calendar is busy with workshops, webinars, lectures and symposiums. Director Larry Pfeiffer says another public forum is planned for April, again at the National Press Club. The topic this time will be the intersection of security, intelligence and culture. Hayden is an adviser on the TV spy thriller “Homeland,” so the panel is expected to feature principals from the show, including its co-star, Mandy Patinkin.

Eventually, the Hayden Center will produce policy papers, raise money for scholarships and take its programs on the road. Meanwhile, Rozell says, Schar’s master’s degree program in international security studies, which includes 100 students, “connects nicely” with the work being done there.

Spot-on political polls
Another win for Mason, and the Schar School in particular, has been its partnership with The Washington Post to conduct public opinion polls. The pollsters thus far have called three races, Rozell says.

First, they predicted Hillary Clinton over Donald Trump in Virginia by 5 percentage points. Spot on. Then, they chose Ralph Northam over Ed Gillespie for Virginia governor. Right again.

Lastly, they picked Doug Jones over Roy Moore for U.S. Senate in Alabama. The Post-Schar Poll’s performance on that highly publicized race was especially sweet. Other than Fox News, no other poll even picked Jones to win, and Fox had Jones by 10 points.

Capital improvements
Mason’s expanding ways extend to bricks and mortar, with a fiscal year 2017 capital budget of $58.4 million and an FY ’18 budget of $60 million.

Significant projects include a $32 million 50,000-square-foot science center that opened on the Occoquan River in October and an $8.5 million, 14,000-square-foot addition to the Hylton Performing Arts Center on the Manassas Science and Technology Campus that is scheduled for completion this year. 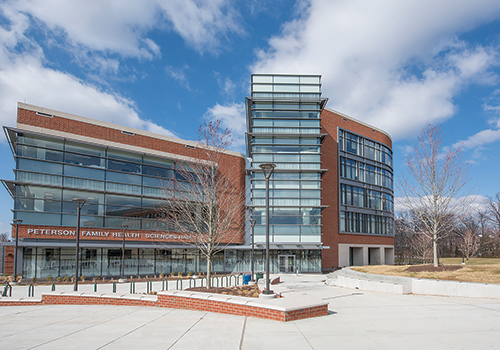 The CINA equivalent in capital outlay, however, would be the just-completed $71 million home for the College of Health and Human Services and the Volgenau School of Engineering’s Department of Bioengineering. The Peterson Family Health Science Hall, located on the Fairfax campus, is Mason’s second-largest facility. A ribbon-cutting is slated for May.

Wu, GMU’s provost, says that in addition to classrooms and labs, the building will feature a nearly $2 million MRI suite. True to Mason’s mission to do targeted and partnered research, the university’s students and researchers and Inova Health System will be collaborating on the use of the high-tech machine to advance the study and treatment of brain diseases.

The MRI, like other Mason research projects, was made possible by a grant from the National Science Foundation. In FY’18, sponsored funding makes up more than $200 million of the university’s $1 billion budget, a figure that has held steady during the past four years.

Philanthropic support
While Mason has been relieved that federal money for its research has remained consistent, given the overall lack of increases and even reductions in federal support, its philanthropic support of late is something to crow about.

The Schar School, for example, is named for homebuilder Dwight Schar, who in 2016 gave the fledgling college an unrestricted gift of $10 million. Also, the name of the health sciences center on the Fairfax campus acknowledges a $10 million donation from local developer Milt Peterson and his wife, Carolyn. (The gift includes $8 million for the facility.) Overall, private giving went up 33.3 percent last year. That represents a $15 million bump, for a total of $60 million in donations.

The GMU official budget summary for 2017-2018 called such a boost in private giving  “astonishing,” and, certainly, it would be for most schools. But as Mason bustles into the future, it doesn’t really seem that surprising for this one.