Across the state, even in rural areas that often have been underserved, many hotels are newly open or in the works. Some are midlevel spots filling a traveler’s basic needs for overnight lodging, while others cater to tourists and business people who prefer a boutique, historic or high-end experience.

“There are more than 12,000 rooms in the planning stage and under construction,” says Esra Calvert, director of research at the Virginia Tourism Corp. “We are getting a good healthy boom. The industry is in a good place.”

Tourism organizations around Virginia are focused on marketing their localities’ unique features, she says, whether it’s the history, mountains, beaches or cityscapes of the Old Dominion.

“People want to see more local product,” Calvert says. “They want to have a fun time, and they want to feel the taste and culture of a place. They want a standard but also want to be immersed with local culture.”

Below is a sampling of new and renovated hotels and conference spaces completed in the past year, as well as some on the horizon, designated by region:

Central Virginia
Virginia’s first Drury Plaza Hotel, owned by St. Louis family business Drury Hotels, opened in western Henrico County in September. It has 217 rooms and is on West Broad Street next to the SunTrust Center in Innsbrook.

Chesterfield County’s Shamin Hotels has many projects on the horizon in the Richmond region, including the Marriott-branded boutique Moxy Hotel at Fifth and Franklin streets, set to open in early 2020 with 95 rooms and a bar and lounge. Also, the company announced in June it is planning to invest $125 million in two new hotels in Chesterfield over the next three to five years, including an upscale, 200-room hotel and 10,000-square-foot conference center whose brand has not yet been announced, and a 180-room Hampton Inn and Home2 Suites by Hilton, near three existing hotels the family business owns.

A 541-room Hyatt Regency hotel is included in the proposal for downtown Richmond’s $1.5 billion Navy Hill development, which is set to be voted on by City Council later this year or in early 2020. If approved, the hotel would provide more room for visitors near the Greater Richmond Convention Center. Navy Hill spokesman Jeff Kelley estimates the hotel would be finished no sooner than 2022.

InterContinental Hotels Group’s Avid Hotel, a brand launched last year, is set to open in early 2020 in Hanover County, on U.S. 1 near Sliding Hill Road. A second Avid Hotel is also planned for Chesterfield County near Interstate 95, with no construction timeline announced yet.

A second location of Richmond’s boutique Quirk Hotel is under construction on Charlottesville’s Main Street, where it is expected to open in early 2020. It will have 80 rooms and a rooftop bar, as well as an art gallery and meeting and banquet space; owners Ted and Katie Ukrop haven’t said how much the hotel costs, but they have raised $12 million, according to news reports.

In Albemarle County, the Boar’s Head Resort, formerly known as Boar’s Head Inn, finished a $15.5 million full-resort renovation project in May, including a refresh of the Mill Room, its fine-dining restaurant. Also underway is a redesign of the resort’s Birdwood golf course, expected to be finished in late spring 2020.

Lynchburg’s Bluffwalk Center has a few projects happening this year, including a new beer garden and the addition of three more rooms and a private rooftop bar over the historic Craddock Terry Hotel and Event Center. Construction on the new projects is expected to conclude by this fall.

Northern Virginia
The Embassy Suites by Hilton Crystal City finished $10.7 million in renovations of its 269 guest suites in April. Included among the lodgings are 12 “Pure Wellness” suites that are nearly 100% allergen-free, according to the hotel. 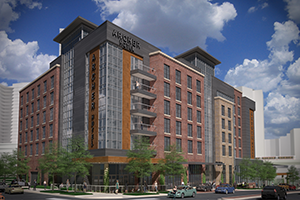 A new Archer Hotel is expected to open in Tysons in summer 2021, featuring 178 rooms, 6,500 square feet of meeting space and a Charlie Palmer-helmed steakhouse.

A lot of hotel owners are considering their options in National Landing, where Amazon is set to build its $5 billion HQ2 by 2030. The 299-room Residence Inn Arlington Pentagon City was sold for $99.1 million to Blackstone in July, and the owner of the DoubleTree by Hilton, a 627-room hotel within walking distance of the office complex, is considering a redevelopment project, according to news reports.

The Dittmar Co. has proposed a massive redevelopment of Holiday Inn Rosslyn near the Key Bridge, with two towers — one with 490 apartments, the second a hotel with about 340 rooms. The 759,400-square-foot facility would also have about 14,700 square feet of retail space. The plans are now in the hands of Arlington officials.

The Renaissance Reston Station, a hotel developed by Marriott International and Comstock Partners, is set to be built as part of the 8.4-acre Reston Station Promenade near the Silver Line’s Wiehle-Reston East Metro station, with completion expected in 2022. It would include 250 guest rooms and 80 luxury condominium units on the upper floors.

Eastern Virginia
The $125 million Marriott Oceanfront Hotel Virginia Beach is set to open in March 2020. The 20-story, 300-room hotel will feature more than 25,000 square feet of meeting space, including an oceanfront terrace off the 11,000-square-foot ballroom. It’s part of Marriott’s three-phase, $350 million master plan, which started with the redo of the Cavalier Hotel in 2018.

In January 2020, Marriott’s new boutique hotel in a 1912 building, Glass Light, is set to open in Norfolk’s historic district. Among its features are glass art objects by Dale Chihuly and Peter Bremers.

Chesterfield-based Shamin Hotels bought the Sheraton Virginia Beach Oceanfront, which is set to reopen next March after a year of renovations, including 11 event rooms and 20,000 square feet of meeting space.

Delta Hotels’ Virginia Beach Bayfront Suites is expected to reopen in June 2020 after $25 million in renovations. The hotel, formerly the Virginia Beach Resort Hotel and Conference Center, is on the Chesapeake Bay and will have 292 rooms and more than 13,000 square feet of meeting space.

The $17 million Element by Westin, an extended-stay hotel by Marriott, opened in April at Hampton’s Peninsula Town Center, including a meeting room, a rooftop terrace and 127 guest rooms and suites.

Also in Hampton is the new Hyatt Place, a $16.5 million, 110-room hotel that opened in March near the Hampton Roads Convention Center.

Great Wolf Lodge Williamsburg completed $7 million in renovations in March, with updates of guest rooms, which have a lighter, lodge-style look. 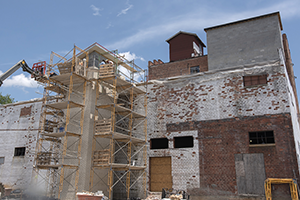 Construction of the 70-room, $20 million Sessions Hotel in downtown Bristol is expected to be finished in October, a year after the $20 million Bristol Hotel opened its doors. The Sessions is a historic renovation of three century-old buildings, including the former Bristol Grocery, by Creative Boutique Hotels and MB Contractors. A music venue, luxury spa and barbecue restaurant are also part of the project. The eight-story Bristol, a rehabilitated 1920s-era building, landed on two national lists of best new hotels this year.

On the Tennessee side of the city, construction crews broke ground in June for the Holiday Inn-branded Tenneva Hotel.

In Wytheville, the 94-room Tru by Hilton hotel opened in July near the I-81 and I-77 interchange, not far from the new 90,000-square-foot Appalachian Regional Exposition Center.

Roanoke/New River Valley
The Holiday Inn Valley View Roanoke finished renovations in March. It has more than 11,000 square feet of meeting space, including two ballrooms and a new patio with fire pits.

A Tru by Hilton hotel — a new boutique-like concept that includes free wi-fi, work spaces, games and a snack shop — opened last November about 10 minutes from the Roanoke-Blacksburg Regional Airport.

In the wings for downtown Roanoke is a new boutique hotel on the site of the former Liberty Trust Building, which was slated to be demolished in September. The site owner, JS Project LLC, is affiliated with Fairfax-based Savara Development and Savara Hospitality, which owns, operates and manages hotels and inns nationwide.

Shenandoah Valley
The Omni Homestead in Bath County is set to reopen its 1700s-era Jefferson Pools in summer 2020, working with the Virginia Department of Historic Resources and 3north, a Richmond architecture firm, to make repairs and renovations. The pools were shut down by the county in 2017 because the bathhouses were deemed unsafe.

The former Staunton train station reopened as a new wedding and event venue, Stelle Rose at Staunton Station, in August. The building, constructed in 1902, was renovated by Mark McConnel of Roanoke’s Summit Studio, who also updated the Stonewall Jackson Hotel and Conference Center. The new space can hold up to 180 people.

A new Tru by Hilton hotel opened last November in Staunton, after the October opening of the Fairfield Inn & Suites by Marriott. Both are part of the 300-acre Staunton Crossing multiuse retail and office complex near Interstate 81, once the site of Western State Hospital.

The new TownePlace Suites by Marriott opened in Front Royal in August, with 84 guest suites, near Skyline Drive and Shenandoah National Park. The hotel is owned by Winchester-based Aikens Group, which focuses on the I-81 and I-66 corridors.

Southern Virginia
A Roanoke developer is working on two boutique hotels in Danville’s River District, including a $6.2 million project in the Knights of Pythias building and the former Danville Register & Bee offices on South Union Street, which will be known as The Honey Bee, with 42 suites. Mid-Atlantic Prospects LLC also requested a special-use permit in July to build a $6 million hotel on Main Street with as many as 40 suites.

The Institute for Advance Learning and Research’s conference center in Danville is set for a $2.8 million integrated technology expansion project.

The long-closed John Randolph Hotel in South Boston is ready to become a boutique hotel with a rooftop bar. The town, which secured close to $1 million in federal and state historic tax credits, expects to choose a contractor this fall, and upon completion, the Randolph will be managed by Williamsburg’s Cornerstone Hospitality. 