Four years ago, Loudoun County-based Middleburg Bank had two people in its compliance department. Today, because of the numerous banking regulations coming out of the Dodd-Frank Wall Street Reform and Consumer Protection Act, the bank has tripled its compliance staff. And that’s not counting the outside counsel it has  on retainer to deal with the increased regulations.

“We have six people … focused full time on compliance and making sure we’re following the rules,” says Gary Shook, the bank’s president and CEO. “It’s just that there’s so many [rules], it becomes a head-scratcher.”

In early January, a new set of Dodd-Frank regulations governing mortgages went into effect, requiring more extensive lending documentation and removing protections from lawsuits for banks for some mortgages. In addition to hundreds and hundreds of pages of new banking rules that have already been implemented, about 60 percent of Dodd-Frank regulations are still waiting in the wings and this has smaller community banks worrying whether they can cope with the sheer volume of compliance changes needed.

“Bankers are very concerned about these mortgage rules,” says Virginia Bankers Association President and CEO Bruce T. Whitehurst. “We’re talking about over 3,000 new pages of regulations and significant changes as to how banks document their mortgage lending activity. This requires system changes.”

Says Shook: “For one type of mortgage … [it] was 1,200 pages … and you multiply that by the many, many code sections of Dodd-Frank and that’s a lot of reading and a lot for folks to understand just to make a simple mortgage. To me, if you can’t boil it down to one or two pages of ‘here’s the facts,’ then somehow there’s too much regulatory oversight. That is a burden for a bank my size because we have to add people to review these things and stay up to date.”

Banking survey
More than 100 community bank leaders across the United States were surveyed by KPMG LLP for its 2013 Community Banking Outlook Survey, released in November. Anticipating the new Dodd-Frank regulations, 65 percent of respondents said it was likely their bank would be involved in a merger or acquisition in 2014, either as a buyer (42 percent) or a seller (25 percent). Regulatory and legislative pressure was cited by 42 percent of those surveyed as the most significant barrier to growth in the coming year.

“Community banks are exhibiting a great deal of resiliency in light of the challenging environment they’ve faced the past several years,” John Depman, national leader of Regional and Community Banking for KPMG, says in a news release. “Regulatory compliance requirements are negatively impacting their operating costs, but this is accepted as the new normal and community banks are taking steps to ensure their viability and growth, or evaluating whether it’s the right time to sell.”

Says Whitehurst: “If your cost of doing business is going up more than you can grow your revenue and your profitability is going down, then the company has to look at what does that mean and what does the future look like. There is a pretty broad expectation that there will be a lot of mergers and that that a lot of them might be driven by the need for scale.” By merging, smaller community banks “will gain in scale and be able to spread the cost of the regulatory burden across a bigger base of revenue.”

Mitigating costs from banking regulations was one of the factors cited in the First Market Bank-StellarOne merger last year. 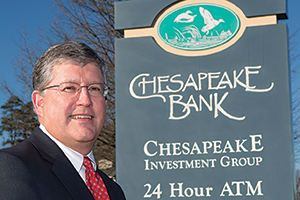 “It’s hard to quantify, but Dodd-Frank and all the other regulations are sort of the death by a thousand cuts,” says Chesapeake Bank CEO Jeffrey Szyperski. “Which cut is [the one that] drives you to be acquired I can’t tell you … but the cumulative effect of the all the cuts would definitely cause consolidation in our industry.” In the community banking industry right now, he says, an acronym is making the rounds: TSTS — “too small to succeed.”

“At some point,” he says, “there’s a critical mass where the regulatory burden is too much for a smaller institution to absorb and that could drive merger/acquisition activity. … I’ve been in banking 23 years and the regulatory environment’s as burdensome now as it’s ever been. It detracts from a bank’s ability to serve their customers.”

Loss of safe harbor
That said, community banking professionals in Virginia feel that the KPMG survey results are overstated. There are nearly 7,000 community banks in the United States, and it’s unlikely that 1,750 of them will sell themselves to a larger bank before 2015, Whitehurst says.

Some of the new regulations are reasonable, Shook says, such as new standards to determine a potential mortgage applicant’s ability to repay the loan. There is a new checklist requiring banks to get documentation of factors such as current employment status, monthly debt-to-income ratio and current debt obligations including alimony and child support.

“You go down a list of what I would call pretty common-sense things … to make sure you’ve got your file in order so that if someone did come back and sue you and say you tricked them into taking out a loan [they] couldn’t afford to pay, you can say, ‘I went right to the checklist of ability to repay and I have done what I was supposed to do. … As a bank CEO, I like that documentation because it protects you and the consumer at the same time.”

One of the major concerns from the new regulations, however, is that it removes protection, also known as safe harbor, for banks from consumer lawsuits for nonqualified mortgages that don’t meet the new ability-to-repay status. This means that borrowers could sue the banks and prevent foreclosures by claiming that the bank made the loan knowing that the borrower might not be able to afford it.

This is a problem for community banks because some large parcels of rural land, such as horse farms, which can’t be placed on the secondary market because of a lack of good comparables, wouldn’t meet the new ability-to-repay qualifications, even with a prime borrower, Whitehurst says.

Shook and Szyperski say that the majority of community bankers they know in Virginia still plan to make these nonqualifying residential mortgage loans, but they acknowledge that having legal protection removed may deter some community banks from lending in certain cases. This could also ironically make some mortgage loans more expensive for prime borrowers, Whitehurst says.
“We intend to continue to make [nonqualifying loans]. We will just have to document them better,” Szyperski says. “I think there will be a contraction in the supply of available lenders over time. I think it will affect people’s ability to get mortgage product … [but] I think there are plenty of loans that are [nonqualifying mortgage] loans that are very good loans from a risk perspective and need to and should be made. … We still need to be able to serve our community and that’s where we fall on it.”

It will be a few months yet before community banks can determine the impact of the new mortgage regulations, Whitehurst says, adding that “banks of all sizes are going to be prepared for these rules and they’re going to continue to lend as much as they possibly can, but it’s going to be more of a challenge in the mortgage space.”