Tom Barkin agrees — inflation is too high. But he also says the Fed has the authority to get it back on the right track.

That’s what the president and CEO of the Federal Reserve Bank of Richmond told the Richmond chapter of the Risk Management Association on Tuesday at Triple Crossing Beer, a brewery in eastern Henrico County. “The Fed has the tools to contain inflation over the medium term, and we are committed to returning inflation to our target,” he said. ” We are meeting the test we face and have made clear we will do what it takes.”

Barkin’s talk came in the wake of the Federal Reserve Board of Governors’ June 15 decision to raise the target interest rate by three quarters of a percentage point — the highest increase since 1994.

Barkin said that the move was necessary due to higher rates of inflation than previously anticipated.

Americans need to wait for the market to settle down from shocks caused by the pandemic, the Russian invasion of Ukraine and supply and labor shortages, he said. The current economic moment — with record-breaking inflation, gas prices over $5 a gallon and rising rents and home prices — feels particularly unstable because of the relative stability of the economy prior to COVID, Barkin acknowledged in a Q&A session following his speech.

“I think with 20/20 hindsight, [the decade before COVID was] an unbelievably stable time for inflation, for GDP, for job growth, for an economy in general,” he said. “And we’re now two years into a quite unstable time. I think things need time to pivot back and forth to get back to stability. Continued volatility around some of these economic indicators [is] a more likely scenario. I do think that means we’re going to have some months or maybe even some quarters [when] our inflation points are actually well below where they were before COVID. But then you’ll have months where they’re high.”

Although Barkin was not willing to say a recession is definitely coming, as far as many Americans are concerned, it seems pretty likely. Citing the University of Michigan’s most recent consumer sentiment survey, Barkin noted that consumer sentiment fell to its lowest level on record and the percentage of small business owners surveyed  expect better conditions over the next six months was at its lowest level in the history of the survey.

Speaking specifically about Virginia, Barkin said that heavy government and military spending would help Northern Virginia and Hampton Roads avoid the worst impacts if the U.S. economy hit a recession. “I think the rest of the economy is relatively diverse, and it’s going to be affected a lot like the rest of the country. The question is going to be, ‘How deep does it go?'”

Many recall the 2008 Great Recession, a “very significant financial crisis,” he noted, “which, fingers crossed, doesn’t seem to be in the cards today.” He compared today’s economy to those that preceded the shorter recessions of 2001 and 1994, which affected certain sectors but were not as broadly destructive.

In his speech, Barkin also noted that fiscal support from the pandemic is waning and now it’s moving the Fed to raise interest rates, which slows the economy by making it more costly to borrow. “Historically, eight of the last 11 Fed tightening cycles have been followed by some sort of a recession,” he said. That markets are skittish is understandable, he said, because the Fed hasn’t moved this quickly to adjust rates in more than 20 years. Couple that with supply-chain challenges, pandemic-era shortages, the war in Ukraine and lockdowns in China, and even more unknown factors swirl.

But, he points out, consumer spending — responsible for two-thirds of the economy — is “quite healthy” and supported by strong personal balance sheets, excess savings accrued during the pandemic and the ability to do things like book trips again. He added that unemployment is historically low at 3.6%, and interest rates have not reached levels that constrain the economy.

“Barring an unanticipated event, I see rising rates stabilizing any drift in inflation expectations and in so doing, increasing real interest rates and quieting demand,” Barkin said. “Companies will slow down their hiring. Revenge spending will settle. Savings will be held a little tighter. At the same time, supply chains will ease; you have to believe [computer] chips will get back into cars at some point. That means inflation should come down over time — but it will take time.”

Barkin noted that the economy is out of balance today because stimulus-supported excess demand overwhelmed supply chains that are already constrained, but going back to normal means putting more products back on shelves, seeing restaurants and stores fully staffed, and cars back on auto lots.

“Most importantly, moderating demand has a higher purpose squarely in our mandate: containing inflation,” Barkin said. “The Fed is on a path to return inflation back to normal levels. We have the credibility with households, businesses and markets required to deliver that outcome. We may or may not get help from global events and supply chains. There is of course recession risk along the way, but there’s also the prospect of the economy returning closer to normal.”

Why the Richmond Fed has zero Black Ph.D. economists 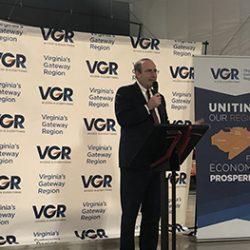