Although the nation’s commercial real estate market is still lagging for the most part, that isn’t the case in Charlottesville, where fresh new multiuse projects have perked up interest in workspaces.

The nationwide vacancy rate for office space in the first quarter of 2022 was a rather dreary 15.7%, according to Yardi Matrix, a commercial real estate research service. The picture in Virginia was only somewhat brighter, with Washington, D.C.-based CoStar Group Inc. reporting a statewide office vacancy rate in the commonwealth of 12.3% for the same period.

However, in Charlottesville, only 8.9% of office space was vacant. Making that stat more impressive is the fact that in the past 18 months or so, the city has added an unprecedented half-million square feet of new Class A office and mixed-use space to its inventory.

Just four prestigious projects — Dairy Central, Apex Plaza, 3Twenty3 and the CODE Building — are responsible for this huge expansion. They’re “a big chunk of space,” says the city’s economic development director, Chris Engel, and that’s no exaggeration, as the four properties alone increased the city’s supply of Class A office space by 63%, even though they collectively represent about 13% of Charlottesville’s total inventory of 4 million square feet of all classes of office space. All this new square footage is being absorbed quickly, however.

CBRE Group Inc. reports that 87% of the large companies it surveyed last year intend to move to a hybrid work model. And with that kind of seismic shift in the employment paradigm, demand for office space, which cratered during the start of COVID-19, has been slow to recover. A few lucky markets have bucked that trend, however, and one of the most notable in Virginia is Charlottesville.

John Pritzlaff IV, senior vice president at Cushman & Wakefield | Thalhimer, has been involved with leasing for three of the major new Charlottesville projects. Because so little commercial space was added to the city’s inventory during the previous 10 or 15 years, he says, Charlottesville’s office vacancy rate had sunk to a negligible 1.5% during one pre-COVID period. That helped support a resurgent post-pandemic demand for Class A space in the city, especially as a flight to quality office assets has become a major trend in the high-end commercial real estate market.

Although LEED-certified buildings currently account for only about 3% of all U.S. office buildings, the online office space database Offices.net reports that 80% of investors plan to add green assets to their portfolios in the coming years. Companies want to be seen as environmentally responsible, and they are seeking sustainable spaces that reflect favorably upon their corporate values and responsibilities.

“Quality” in the Class A office market today includes more than just green bona fides, however. Another expectation is that high-end buildings will include plenty of employee amenities, such as gyms, on-site food options and lactation rooms. Open spaces that encourage collaboration rather than isolation are a new must, too, and rather than being housed in the insular and isolated structures of yore, today’s office tenants want buildings with outward-facing designs intended to integrate them into the surrounding community. All four of the new Charlottesville developments check these boxes.

Located midway between the University of Virginia’s campus and the Downtown Mall, the mixed-use Dairy Central was the first of the four projects to open, amid the height of the pandemic in late 2020. The redeveloped creamery, which offers a 23,000-square-foot food hall, 180 apartments, 50,000 square feet of office space, a 6,000-square-foot event space and a 7,500-square-foot patio, has a silver rating from the Leadership in Energy and Environmental Design ranking system. It’s 95% leased, Pritzlaff notes.

Closer to the pedestrian mall is 3Twenty3, which was finished in mid-2021. The nine-story, 120,000-square-foot building features a rooftop space and a large lobby, both of which can be used for events. It has several restaurants, a public plaza, electric car charging stations and covered bike racks. Pritzlaff says it is 99% leased, and tenants include a law office and software and financial firms.

The third project, Apex Plaza, is a 187,000-square-foot, mixed-use building with office, retail and residential space that opened in April just south of the Downtown Mall. The plaza’s wow factor is that it is the tallest cross-laminated timber building on the East Coast and one of just a few in the entire country. Although not LEED-rated, Apex includes extensive green features such as rooftop solar panels capable of generating 300 kilowatts of power and energy storage capabilities that allow it to be net zero. That status aligns with the sustainability ethos of its main tenant, Apex Clean Energy, a wind-power company. The plaza is more than 90% leased.

But perhaps C’ville’s splashiest addition to the commercial real estate market is the CODE (Center of Developing Entrepreneurs) Building, which sits on the west end of the Downtown Mall. Envisioned by owner Jaffray Woodriff, co-founder and CEO of $3 billion hedge fund Quantitative Investment Management LLC, as an incubator for technical innovation, CODE furthers his goal of turning the region into a high-tech leader. Woodriff and his wife, Merrill, donated $120 million to their alma mater, U.Va., in 2019 to establish the School of Data Science.

Opened in fall 2021, Woodriff’s 160,000-square-foot CODE Building, which is more than 90% leased, includes offices, coworking spaces, a 200-seat auditorium and ground-floor retail. It has earned a LEED gold rating in recognition of its green roof terraces, rainwater harvesting, touch-free elevator and entries, electric car charging stations, bike storage, advanced air-filtration system and “wellness” staircases that encourage fitness. In a rarity for a nine-story building, its windows even open. CODE’s lead designer, José Alvarez of the New Orleans-based architectural firm EskewDumezRipple, plans to enter this new Charlottesville landmark into The American Institute of Architects’ building of the year competition.

Bruce Miller, CEO of Investure LLC, which manages money for university endowments and nonprofits, has leased 13,000 square feet plus a 6,000-square-foot deck at the CODE Building for his 45 employees. The building, he says, reflects the values of his firm, which include stewardship, creativity and collaboration.

“We really like the health and wellness benefits and the quality location,” he says, adding that, because of COVID, “it is nice to have lots of fresh air.”

Andrew Boninti, president of CSH Development LLC, one of the CODE Building’s developers, says it was specifically designed “to react to what is important to the tenant. This is what the future is.”

Lisa Sturtevant, research leader at Bright MLS Inc. and former chief economist for Virginia Realtors, says although the cost-per-square-foot rates in Charlottesville once were below the state average, they’re now rising three times as fast as the state as a whole. “Charlottesville has been coming into its own in the past couple of years,” she says, “and landlords can ask for and get higher rates.”

Although Pritzlaff declines to provide leasing rates for the buildings he represents, it is probably safe to assume they mirror rates at the CODE Building, where Boninti says space is going for $35 to $40 per square foot. That’s far higher than the $27.78 regional average reported by CoStar, including Albemarle County and less-desirable B and C class office spaces.

Now that the four big projects have opened, Engel says, there’s nothing as ambitious in the works, and CoStar lists only 190,000 square feet of office space under construction in Albemarle during the first quarter of 2022.

J.T. Newberry, Albemarle’s business development manager, says that a couple of office buildings have been approved and are under construction north and south of town. As for the city of Charlottesville, which covers only 10 square miles and is mostly residential, “generally speaking, a lot of businesses find it easier to expand and renovate than build brand-new,” Newberry says. 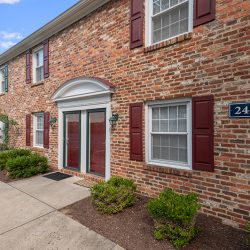