Back to the beach

After a strong summer comeback, the Hampton Roads tourism industry is facing uncertainty once again as the COVID-19 pandemic lingers.

This summer, Virginia Beach hotels saw slightly higher occupancy rates than in 2019 — a welcome return to normalcy. But an autumn and winter of hospitality industry revenue declines related to escalating COVID cases could be in the offing, adding more pain to an industry that has already endured heavy losses due to the pandemic. Virginia lost an estimated $14.5 billion in tourism spending between March 2020 and April 2021, according to the governor’s office.

Hotels in Virginia Beach suffered $81 million in losses from January 2020 through August 2020, according to data from the Virginia Beach Convention & Visitors Bureau. And even though Virginia Beach led the nation in hotel occupancies, with a 60% occupancy rate for 20 weeks in 2020, it was still far short of pre-COVID summer seasons.

Virginia Beach greatly benefits from being a market in driving distance for many on the East Coast, which especially appeals to travelers who fear flying during the pandemic, says John Zirkle Jr., president of the Virginia Beach Hotel Association and general manager of the DoubleTree by Hilton in Virginia Beach. This summer, the beach city’s hotels saw an average occupancy rate of 84.2%, a slight increase over 2019 pre-pandemic numbers.

“I’m always optimistic; I’m in the hospitality business,” Zirkle says. “We got kicked in the teeth again and again over the course of 2020 and basically the first half of 2021. We keep brushing ourselves off and doing what we need to do, and I think people do want to travel.”

But the uptick still isn’t nearly enough to cover revenue lost during the pandemic, analysts say. And hotels, restaurants and other tourist attractions are still facing worker shortages that severely impacted their ability to serve the onslaught of summer travelers.

Many area restaurants closed for lunch due to low staffing volumes. And some Virginia Beach Hotel Association members reported that they couldn’t fill some available rooms despite demand, because they didn’t have enough housekeeping workers, Zirkle says.

Businesses offered their own pay incentives to attract workers, including bonuses and other incentives for housekeeping staff to turn rooms over in a timely manner, and front desk staff to sell out vacant rooms, Zirkle says.

This fall is likely to be impacted by the highly infectious delta variant of COVID, which is leading to some cancellations and postponed events. In Hampton Roads, business travel and convention center events are important to autumn hospitality revenue, says Eric Terry, Virginia Restaurant Lodging & Travel Association’s president.

“Convention centers are a major driver of our hotel occupancies and they help fill businesses during off-peak times,” Terry says. “So, the lack of that is really going to hurt.”

Nevertheless, the region’s hospitality industry is facing a long journey to make up for its pandemic-caused revenue losses, Terry says.

“The most recent projections I’ve seen is that it’s probably going to be 2023 before we get a full rebound in terms of our hotel occupancies and restaurants,” he says. “And that will somewhat depend on labor.”

The Hampton Roads region will see two casinos completed in the next two years, after the General Assembly passed a bill allowing commercial casinos to be built in five economically disadvantaged cities. Here are the stats for the resorts coming to Norfolk and Portsmouth, where voters approved referendums in November 2020 greenlighting the casinos.

Other investors: None announced, but Rush says it is committed to pursuing investments in the project from local, private-sector minority businesspeople.

Construction: Groundbreaking in October, with completion set in late 2022 or early 2023 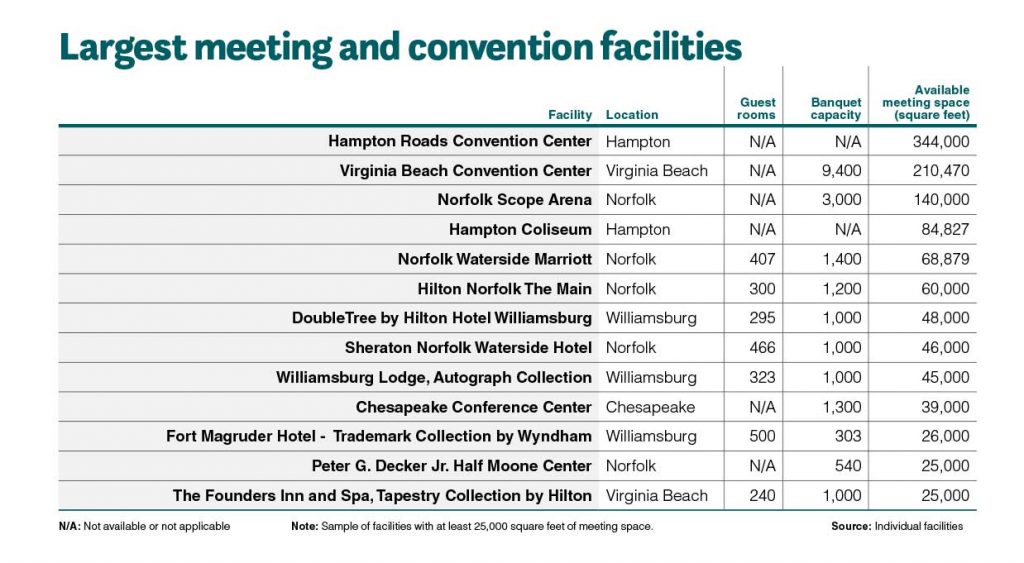