Home News Industries Healthcare Back in the game

Back in the game

Aetna offers health plan to state employees for the first time in more than a decade. 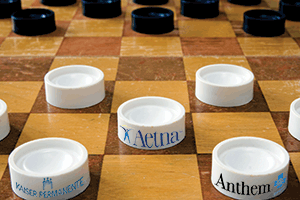 This year, state employees had a new option from which to select during open enrollment for health coverage. Traditionally, Anthem Blue Cross Blue Shield has covered most Virginia state employees, with Kaiser Permanente offering coverage in Northern Virginia.

This year Aetna joined the mix for the first time in more than a decade. The company also offered a more consumer-directed plan, says Mike Bucci, market head for Aetna’s public sector segment. The plan features a higher-deductible policy.  The state, however, contributes to a health reimbursement plan to offset some of those costs.

In addition, plan members can earn credit for taking proactive steps such as having a preventive health exam, completing a health assessment and knowing their blood pressure numbers and other key health indicators.

In its first open enrollment, Aetna enrolled about 7,000 members, Bucci says. The number includes 3,000 state employees plus spouses and dependent children. “That’s a good out-of-the-gate starting point, and we look forward to seeing that grow.”

Aetna has launched partnerships with several health systems around the state, including Inova in Northern Virginia, Carilion Clinic in Southwest Virginia and Riverside Health System in the Hampton Roads area to put high-quality provider networks in place, he adds.

While a plan like Aetna’s isn’t new to the industry, it is a new option to state employees. “The commonwealth is trying to raise awareness around health-care costs and believes that this type of product can help do that,” Bucci says.