Awaiting the next trade move

Whipsawed by conflicting signals from D.C., Virginia companies prepare for an uncertain future

Brett Vassey, president of the Virginia Manufacturers Association, says none of his member companies are panicked by the conflicting signals President Trump has sent as he tries to renegotiate a number of long-standing trade agreements with nations around the world. Nonetheless, Vassey says, Virginia manufacturers are taking a number of precautionary measures to insulate their businesses and protect their employees.

In recent months, the Trump administration has alternately threatened and withheld double-digit tariffs on top trading partners, including the European Union and China, to gain more favorable terms. The rhetoric has heightened fears of a possible trade war.

“We try not set our hair on fire and run around the Capitol in Washington, or here in Richmond, on these issues,” says Vassey. “Manufacturers are resilient. They are used to supply-chain disruptions and market volatility. They fully realize these tariff issues … are linked to pretty significant geopolitical issues. Harmonizing those politics while we are harmonizing the tariffs will just take time. Meanwhile they will have to adapt as these things shake out.”

One of Trump’s first actions last year was to scuttle the Trans-Pacific Partnership (TPP), a regional free trade agreement that the Obama administration helped author aimed at isolating China and strengthening smaller Asian economies. A second move was his decision to renegotiate the 24-year-old North American Free Trade Agreement (NAFTA) with Canada and Mexico.

In January, Trump announced tariffs on imported washing machines and solar panels. In March he announced plans to levy double-digit import duties on steel and aluminum, and on $50 billion in imports from China. In April, Beijing retaliated with a slow roll-out of equally harsh duties on more than 100 U.S. exports, including tobacco, corn, soybeans, cars, trucks, chemicals, plastic products and aircraft. (The list expanded to 659 types of U.S. products in June.)

China’s aggressive response to the Trump administration’s opening salvo on tariffs — along with its importance to Trump to help pressure North Korea to end its nuclear weapons program — helped delay the start of what many analysts fear could become a much more serious trade dispute. In late May, the White House announced a flat 25 percent import duty on “industrially significant” imports from China, adding that new restrictions on immigration from China and direct Chinese foreign investment in the U.S. would be in place as of June 30. 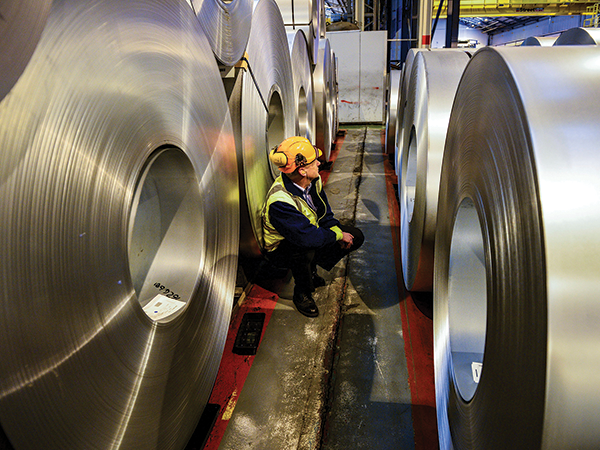 In late May, Trump withdrew exemptions on steel and aluminum tariffs that had been granted to three major trading partners,  Canada, Mexico and the European Union. They all vowed to retaliate with tariffs on American products.

In June, immediately after the most contentious meeting of G-7 nations in memory, trade relations between Canada and the U.S. turned even more frosty. Prime Minister Justin Trudeau, said his nation wouldn’t be “pushed around” by the United States on trade or the ongoing renegotiation of NAFTA. The next day, Larry Kudlow, a top White House economic adviser, confirmed that President Trump is in favor of pursuing new, separate bilateral trade agreements with Canada and Mexico.

Later this month, import duties against a wide range of U.S. exports to Canada and the EU were expected to begin. Furthermore, the Trump administration had scheduled public hearings for July 19-20 on its proposal to impose punitive duties on foreign-made motor vehicles, a measure strongly opposed by U.S. auto companies and the governments of Canada, Mexico and the EU.

“Most people are not sure about where any of this is going to go,” says international business law expert Tom McVey, chair of the international section with the Williams Mullen law firm. “Many people think it’s just part of Trump’s negotiating style, where he starts off bold, shakes something up but then tries to reach an accommodation, reach some sort of a compromise and the problem goes away.”

Amid this uncertainty, Virginia factories that rely on imports or exports — or both — are evaluating how they can adapt their operations if Trump’s aggressive efforts to create more U.S. manufacturing jobs backfires and the cost of international commerce rises, Vassey says.

Many Virginia factories that use steel and aluminum are trying to extend their current contracts with overseas suppliers for longer periods at current prices. Some are creating lists of possible new suppliers in nations that do not have any, or maybe fewer, trade disputes with the U.S. Others are examining how to reclassify and repackage the products they currently buy or sell overseas so they can sidestep any new tariffs. Quite a few are examining all three possible solutions.

McVey, with Williams Mullen, agrees that he’s seen little alarm yet among experienced U.S. exporters and says the smart ones are trying to avoid production disruptions by moving quickly to solidify their international partnerships by petitioning U.S. officials for exclusions and exemptions to any new import duties.

$16.5 billion in exports
“He’s slowly negotiating exclusions and exemptions,” McVey says of Trump. “U.S. companies can come in and request to be excluded from the tariffs; he’s also negotiating exclusions and waivers for foreign governments. There are so many holes in this. We don’t quite know what the coverage of these tariffs will be … American companies haven’t been panicking yet, but they’re nervous.”

Despite so much conflicting information about future U.S. trade relationships in Asia and closer to home, Virginia’s farmers are keeping their cool, says Tony Banks, a marketing specialist for the Virginia Farm Bureau Federation.

“Aside from tobacco, Virginia is not among the top U.S. states as an exporter for any particular commodity,” he says. “We export a lot of poultry products, we export pork and lots of soybeans and soybean meal, in addition to tobacco … With NAFTA, definitely poultry and pork; to China soybeans, pork and tobacco.

“We’ve made it clear to [Agriculture] Secretary [Sonny] Perdue and other members of the Trump administration that exports are vital to the health of Virginia agriculture,” Banks says, adding that China’s livestock and food industries may be too dependent on imported soybeans to follow through on its tariff threats on many U.S. agricultural products.

NAFTA negotiations
However, profit margins at U.S. farms are shrinking to just pennies on the dollar, Banks says. “If China does levy any punitive tariffs on agricultural exports, “it definitely would have an impact on prices here,” he says. “It might turn out to be a draw, and we’re quite hopeful to see both governments settling this without getting into a trade war.”

Banks hopes that the ongoing renegotiation of NAFTA will be less contentious, saying, “It’s still a wait and see … with any trade deal there will be pluses and minuses. It can’t be a 100 percent win for either side.”

McVey, the Williams Mullen attorney, reports that “there are still more question marks than final answers,” in talks between Canada, Mexico and the United States to update and modernize the free- trade agreement, which generated tremendous controversy in all three nations before being implemented on New Year’s Day, 1994.

He says current talks have snagged on “content on automobiles, the dispute mechanism, the procurement chapter and labor laws, all of them core elements of this agreement.

“At this point it’s very hard to say which issues they will cave on and which ones they will hold on to. It’s almost impossible to predict at the moment,” he says.

Yet, in spite of what he calls needless “drama” surrounding the Trump administration’s strategy to renegotiate the nation’s international trade agreements, McVey urges more small companies to take advantage of a strong U.S. economy here at home and strong economies in many parts of the world.

McVey says he is not sure if the recently imposed tariffs will be temporary or permanent. But, he adds, there is a good chance that “they are just temporary during the trade negotiations.  So stay the course for now — the world economy is quite strong and expanding right now.  Despite the short-term volatility there are still significant opportunities in the international business arena.”