Home Interview Authority of the port

Authority of the port

In January, Stephen Edwards became the new CEO and executive director of the Virginia Port Authority, which oversees the Port of Virginia. The former CEO of Los Angeles-based TraPac, which operates container terminals in California and Florida, Edwards succeeds John Reinhart, who retired after seven years at the authority’s helm. During his tenure, Reinhart steered the port from a financial liability to a key state economic driver.

In March, Virginia Business interviewed Edwards, who previously served as CEO of Global Container Terminals, Ports America Group and P&O Ports North America, about what intrigued him about the Virginia job, how he hopes to build on the port’s success, and how the port is emerging from the COVID-19 pandemic and its impact on spending, shipping and fluctuating volumes.

Virginia Business: What was it that interested you in this job?

Stephen Edwards: I came from retail operations in the private sector, as you may know. In a lot of those operations, you spend a lot of time between the private sector and the public ports [and] public port authorities discussing the risks and rewards. The difference here with the Port of Virginia is you’re both the operator of the port, and you’re also the landlord of the port. You’re the landholder and also the operator.

The attraction is, you can now spend a lot more of your time, of your effort, [on] how to win success for the port. You can spend your energy, you can spend your intellectual capital, really, working on how to have success in the Port of Virginia. It lets you look at the whole enchilada of how we’re going to drive success. That was the attraction.

Edwards: I agree with you that John has handed over a port that’s in good condition. John and the management team here have done a first-class job of bringing me on board. They’ve been fully cooperative and very ready for when I arrived, in terms of briefings, getting me up to speed as fast as I could, and I couldn’t say enough about how John has helped me get my feet under the desk and get a clear run of what needs to be done and give counsel and advice. John has been first-class.

VB: How do you plan to improve the port?

How do we optimize this port complex and how do we grow it? The first focus is safety, as it should be. This is a modern industrial … complex. The modernization allows us to make further safety improvements, and that should always be the goal of the CEO, to make sure everybody is safe. It allows us to further improve the sustainability of the port. It allows us to look to how we further decarbonize the operations. The port has modernized, it’s expanded, so we now want the cargo to fill that expansion. Giving great service levels to attract growth is one of the key focuses on that area.

We’ve got to keep the management talent pool [and] the mechanics’ talent pool with the right skill level, and bringing those skills to bear, so that we continue to be one of the best performing ports on
the coast.

VB: Volume seems to be making a big rebound. Do you think that this pace will be sustained, or is this is a bounce-back period for shipping?

Edwards: Really, for international containerized shipping, China is still the manufacturing producer of our goods. We had that real downturn in Q2 last year, when volumes really were soft, because there was a lack of production in Asia. Then we saw this rebound that really commenced here in September and carried on through the fourth quarter and is still here today. This is driven by the economic activity of buying goods as opposed to buying services. You’re seeing these increases in consumer spending where a lot of it is going into home improvement.

The question then comes, what happens when we do travel and we do go back to buying services such as restaurants and hotels? When it normalizes, it can’t normalize to the point that we can take two holidays a year versus one holiday a year. Because, I don’t know about you, but my vacation days don’t double. They stay the same. I’ve only got so much time to take a vacation.

With the stimulus packages that are coming through, [we] should hopefully see a reasonably good rebound, a reasonably strong period. I would assume that we’re going to see good year-over-year volumes through the half-year when we’re comparing Q4 of this year versus Q4 of last year. Maybe it’ll be too early to tell. Maybe it’ll be a little softer, but it should still be good and it should still be year-over-year.

As of now, there’s still significant inventory shortfalls for a number of home improvement goods and other goods in the country, so I think there’s still a push through of supplying goods. The other thing I think that’s important is, while this surge in imported cargo has been going on, other port gateways have struggled more than Virginia to maintain good service levels.

Our opportunity is how we take some of the importers who had been concentrated 85% on the West Coast and say, “Come and look at what we can offer in Virginia.” Some are doing that now, but our goal will be to keep some of that freight when we go back to normal.

VB: From a competitive standpoint, how does the Port of Virginia stack up in comparison with other East Coast ports?

We’re also a little bit further away from the population base. We have to apply those marine-side advantages and make sure we don’t get pulled back on the land side — the connectivity of the port to the distribution centers to the transloading centers and to the bigger population bases.

VB: What do you see as the port’s biggest challenges?

Edwards: The key area is building that connectivity for the exporters to use, for the import network to attract cargo through a modern, efficient gateway, and persuading the cargo owners, the importers and the exporters that actually going a little bit further from the port nearest to them to come to Virginia is actually to their advantage.

We’re building confidence with the international shipping lines, so people know that if they’re using Virginia, they’ve got a level of certainty.

VB: Do you need to hire more people to accomplish some of these goals?

We will have a key focus on making sure that we keep modern, talented, cool managers on board. In terms of quantity, no, we have sufficient resources. What you might need to do in a few cases is actually say, “We’re going to have some skill sets over time that we want to accelerate,” and with that comes training. We have inside of our management team some highly skilled subject matter experts.

VB: You began your tenure as the Biden administration took over.  What do you hope for in terms of maritime or infrastructure investment?

Edwards: I think one [difference] is going to be a much more significant focus on climate change. We don’t know how the federal investment in infrastructure will get to that investment in clean energy and clean air. [Also], we’ve got the governor’s goal as well of [creating] an offshore wind industry. What role does the port play there? The infrastructure dollars that might be coming from the federal administration — how do we further decarbonize our operations, and are we aligned with them on those goals?

We [also] expect to see a different approach to the trading relationships with other nations. Clearly, as a port, we encourage free trade. It is in our interest to have strong trade, and we’re an economic driver based on that.

Read John Reinhart and VPA board members John Milliken and Stephen Moret on Reinhart’s legacy at the port. 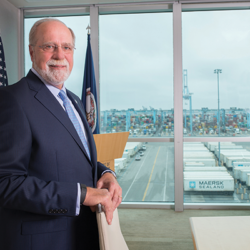