The University of Virginia men’s basketball team fell victim to a positive COVID-19 test in March, forcing it to withdraw from the ACC Tournament — a “gut punch,” Bennett called it.

The team was cleared in time to play in the men’s NCAA basketball tournament, where in 2019, Bennett had led the Cavaliers to the championship. In the unusual pandemic-era season, though, U.Va. earned a fourth seed but lost to Ohio University.

Bennett, a former backup point guard with the Charlotte Hornets, is one of only four former NBA players who have been the head coach for NCAA championship teams. He arrived at U.Va. in 2009, and he’s become a valued university asset, popular, respected and winning, with a record of 295-103 over his 12 seasons. He’s been named NCAA Division I National Coach of the Year three times, twice with the Cavaliers, and nine of his players have been selected in the NBA draft.

In 2019, Bennett turned down a raise, asking university officials to instead focus on more pay for staff and program improvements, the university reported. At the same time, he and his wife, Laurel, pledged $500,000 toward a career development program for current and former U.Va. men’s basketball players.

Bickmeier is entering his 10th year as president of Richmond Raceway, where roaring engines were replaced with idling ones earlier this year, when the complex’s acres of parking and exhibition space became a COVID-19 vaccination site. But Richmond Raceway will be back to full capacity for NASCAR Playoff Race Weekend Sept. 10-11, during the track’s 75th anniversary season.

The NASCAR-owned raceway is a key tourism draw, and Bickmeier is treasurer for Richmond Region Tourism. He also serves on the Henrico Police Athletic League board and teaches sports marketing as an adjunct faculty member at Virginia Commonwealth University.

BEST ADVICE: Never stop asking questions. The desire to learn and keep learning every day will continue to pay dividends personally and professionally.

WHAT A COMPETITOR WOULD SAY ABOUT ME: He’s a tactician. He studies things like a coach and then prepares and executes against a plan.

FIRST JOB: In high school, I worked for our town’s parks and recreation department in Bellaire, Ohio. We did everything from cutting grass at the parks to lining fields for games to operating sports leagues for the citizens. That helped spark my interest in sports management.

You could say that theme parks are in Bywater’s blood. After all, her parents met in 1973 while working as ride operators at the Worlds of Fun amusement park in Kansas City, Missouri.

In January, Bywater took over as Kings Dominion’s vice president and general manager from Tony Johnson, who began his career there in 1974.

Bywater comes to the amusement park at a pivotal time. Due to the pandemic, Kings Dominion was closed last year for the first summer in its 45-plus-year history. In May, she reopened the amusement park, raising the minimum pay for seasonal employees from $9.25 to $13 per hour. Bywater announced in August that the park will debut a new jungle-themed, 112-foot-high spinning roller coaster, Tumbili, in 2022.

A native of Kansas City, Bywater received her bachelor’s degree in business administration from Truman State University. Since beginning her amusement park career at Worlds of Fun in 1992, she’s held numerous leadership positions for Ohio-based Cedar Fair LP, which purchased Kings Dominion in 2006. She sits on the board of Richmond Region Tourism.

Capshaw has come a long way since owning the now-defunct Charlottesville bar Trax. In 1992, Capshaw gave the Dave Matthews Band its first weekly gig at the bar and then became the band’s manager, seeing it rise to international fame.

He also has been heavily involved in real estate development in Charlottesville, including the building of the Downtown Pavilion, now the Ting Pavilion, and renovating The Jefferson Theater on Charlottesville’s Downtown Mall. He also owns many area restaurants.

An accomplished musician and songwriter, Edmunds broke into the film industry through an unlikely method: by producing a music video for one of his songs that was broadcast on MTV.

That experience introduced the Virginia native to the film production industry. He worked as a film location scout before arriving at the Virginia Film Office in 1997. Since then, Edmunds has worked with some of the biggest names in Hollywood, including Steven Spielberg, Clint Eastwood, Ridley Scott and Terrence Malick.

Even amid the pandemic, Virginia served as a shooting location for movies and TV shows. Recent projects have included the indie flick “Tapawingo,” the Lifetime film “Dirty Little Deeds,” the Hulu limited series “Dopesick,” the AMC series “The Walking Dead: World Beyond” and the Apple TV+ sports drama series “Swagger.” According to a media release from Virginia Secretary of Commerce and Trade Brian Ball, the latter three projects generated $120 million for Virginia’s economy over a nine-month period.

Edmunds serves on the board of the Virginia Film Festival and has five children, including two adopted sons from Ghana. 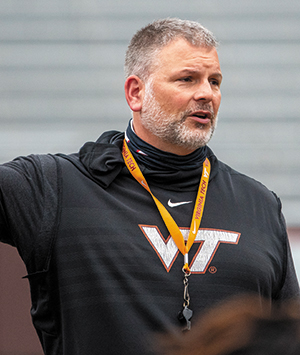 Taking over the Hokies football program from the legendary Frank Beamer – Virginia Tech’s head coach for nearly 30 years – would be a daunting task for anybody, but Oklahoma native Fuente seemed up to the challenge.

Taking the reins in 2016, Fuente, a former Murray State University quarterback and Walter Payton Award finalist, started strong, bringing the Hokies to three consecutive bowl game wins for the first time in the program’s history and being named 2016 ACC Coach of the Year.

Though Fuente and Tech agreed in 2017 to a contract extension through 2023, recent events led some to question whether his tenure would last that long. Last season, the Hokies went 5-6; in the five seasons Fuente has been coach, Virginia Tech holds a 43-32 record. Following a four-game losing streak last fall, some speculated that Fuente might be let go, according to ESPN. Last December, however, athletic director Whit Babcock said Fuente would return for a sixth season.

Lembke’s career in theme parks began in 2000 at SeaWorld Orlando. After spending 2004 through 2013 at SeaWorld Parks & Entertainment’s corporate offices, where he focused on retail product development and retail operations, Lembke came to Busch Gardens Williamsburg in 2013 as its vice president of merchandise.

Lembke transferred to Busch Gardens Tampa in 2016, then returned in 2018 to serve as president of Busch Gardens Williamsburg and Water Country USA. He left Busch Gardens briefly in 2019 to pursue other career opportunities but came back the same year.

During the pandemic, Lembke was one of the most vocal opponents of the state government’s 1,000-person mandated attendance limit on theme parks, saying it wasn’t financially feasible. Alongside other major venue operators, Lembke served on a task force that worked with state officials to develop COVID-19 protocols for large venues. A graduate of the University at Buffalo, Lembke oversees more than
4,000 full- and part-time employees during peak tourism season and serves on the board of the Williamsburg Tourism Council.

FAVORITE SONG: “No Hard Feelings,” by The Avett Brothers

Having previously served as the director of the Academy Art Museum in Maryland and executive director of The Heckscher Museum of Art in New York, Neil came to the Chrysler in 2014 with an eye toward leading it into the digital age.

Neil was an active curator earlier in his career, working with artists including James Turrell, Carrie Mae Weems and Tony Oursler. He’s published books and essays on contemporary art and the histories of architecture and photography. Currently, he serves on the boards of VisitNorfolk, the Military Aviation Museum and the Norfolk Innovation Corridor, and he’s a member of the Southeastern Art Museum Directors Consortium and the Association of Art Museum Directors. He holds a bachelor’s degree from Princeton University and master’s and doctoral degrees from Harvard.

In 2018, the Chrysler opened the Wonder Studio, an interactive gallery that provides children with hands-on art experiences and encourages them to use digital tools to create. During the pandemic, the 140-employee art museum tightened its belt but still developed new exhibitions and programs that speak to its community.

In June, the Virginia Museum of Fine Arts announced it would embark on a $190 million expansion, the largest in its history. The project will add a 100,000-square-foot wing, see 45,000 square feet of the current museum renovated and erect a standalone 40,000-square-foot collections center.

This major project will be the second such initiative since Nyerges took the helm of the VMFA in 2006. Under Nyerges, the VMFA has seen several blockbuster exhibitions, including works by Pablo Picasso and Edward Hopper; Kehinde Wiley unveiled his sculpture “Rumors of War” on the lawn of the VMFA in 2019.

A Rochester, New York, native, Nyerges is an affiliate graduate faculty member at Virginia Commonwealth University. This summer, he presented “Fleeting Light,” an exhibition of his own photography at Richmond’s Reynolds Gallery.

Nyerges previously served as director and CEO of Ohio’s Dayton Art Institute and as executive director of the Mississippi Museum of Art and Florida’s Museum of Art – DeLand.

FAVORITE APP: My running app — to see how far I have gone and how fast, although that is a declining number each year!

Following positions with other minor league teams in Pennsylvania and North Carolina, Parnell — who’s better known around Richmond as “Parney” — came to Richmond in 2010 to serve as vice president and chief operating officer for the Squirrels.

In July 2020, Parnell replaced the retiring Chuck Domino as the Squirrels’ CEO, overseeing all aspects of the team’s day-to-day operations. Under Parnell, the Double-A affiliate of the San Francisco Giants led the Eastern League in average attendance in 2010, 2013, 2014, 2015, 2018 and 2019 and in overall attendance in 2010, 2012, 2014 and 2015. He is a three-time Eastern League Executive of the Year winner and has received Baseball America’s Minor League Executive of the Year award.

With the pandemic canceling the 2020 season, Parnell walked the bases 125 times in April 2020 to raise money for local COVID-19 relief efforts through an event called “500 Bases of Love.” He also serves as president of the Montgomery Biscuits, the Double-A affiliate of the Tampa Bay Rays.

A graduate of Messiah University, Parnell volunteers with Metropolitan Junior Baseball League Inc. and serves on the boards of ChamberRVA, one Richmond Region Tourism and Flying Squirrels Charities.

This July, Snyder announced that he would be stepping away from day-to-day operations of the Washington Football Team following accusations last year from 15 female former employees who told The Washington Post they were sexually harassed and verbally abused at work by other executives during Snyder’s tenure, although Snyder was not accused of misconduct.

In June, Snyder’s wife, Tanya, was named as the team’s co-CEO, responsible for team operations and representing the club at all league activities. Days later, the NFL fined the team $10 million, citing its “highly unprofessional” workplace environment.

Snyder purchased the team in 1999 from the estate of Jack Kent Cooke, back when it was known as the Washington Redskins, a name criticized for decades as racist. The name and logo were retired in 2020 following pressure from corporate sponsors.

A lifelong entrepreneur from Maryland, Snyder co-founded a wallboard advertising company in 1989 with his sister, Michele Snyder, that became Snyder Communications LP. In 2000, Snyder sold the business, which employed 12,000 people, for more than $2 billion.

This year, Forbes valued the Washington Football Team at $3.5 billion, making it the world’s 19th most valuable sports franchise.

Is there anything Williams can’t do? The internationally renowned music superstar behind hits like “Happy” and “Blurred Lines” has garnered 13 Grammys, but he’s also increasingly gaining admiration for his business activities in Virginia, his home state.

In 2019, Williams launched Something in the Water, a three-day music festival in his native Virginia Beach that featured the likes of Janelle Monáe, Missy Elliott, Migos and Dave Matthews Band, among others. The festival was canceled in 2020 and 2021 due to the pandemic, but sponsors hope it will return in 2022.

And this fall, Williams’ nonprofit, Yellow, will open an independent “micro” elementary school in Norfolk’s Ghent neighborhood, focusing on STEM and workforce preparation.