Artemis I to launch with help from Va. contractors

EDITOR’S NOTE: Monday’s launch was scrubbed by NASA shortly after 8:33 a.m. because of an engine issue.

Weather permitting, if the Artemis 1 moon mission launches from NASA’s Kennedy Space Center in Florida Monday morning as planned, it will be powered in part by the work of Virginia-based contractors.

The uncrewed flight test is the first step in a yearslong program to eventually return astronauts, including the first woman and person of color, to the moon in 2025, and one day, to Mars. Artemis I is expected to demonstrate the integrated performance of the Space Launch System (SLS) rocket, the Orion spacecraft and Kennedy’s launch systems. It is expected to travel more than 280,000 miles from Earth, and 40,000 miles beyond the moon, before returning home.

NASA Inspector General Paul Martin estimated in a November report that the agency will spend $93 billion on Artemis through fiscal 2025; costs for producing and operating a single SLS and Orion system for each of the first four missions was projected at $4.1 billion.

Northrop Grumman Corp.’s Lance Christopherson, who is based in Utah, will watch the flight from the space center. As program manager for booster integration, Christopherson leads the team that integrated the booster segments of the twin solid rocket boosters after arriving at the space center by rail in June 2020, assembling them on a mobile launch platform that took the SLS rocket from NASA’s iconic Vehicle Assembly Building to the launch pad.

The rocket boosters on the previous shuttle program were divided into four segments; the SLS rocket boosters have five each. They will provide 75% of the SLS rocket’s thrust at launch, accounting for 3.6 million pounds each — the U.S. space program’s most powerful rockets to date. Falls Church-based Northrop Grumman is expected to produce 35 booster segments, with upgrades, at a cost of $4.3 billion, according the NASA’s inspector general.

While those rocket launchers play a massive role, it’s a short-lived one; they drop away after 126 seconds into a mission.

“I could barely hold my breath that long,” Christopherson said in a phone interview with Virginia Business.

Christopherson’s work doesn’t end when the boosters fall away. There could be future tweaks and updates based on what the contractor has learned, and they will also gather data from the instrumentation on the boosters that could be used to revisit analytical models and improve hardware, he said.

“You could say the end of our mission is the booster separating but, unless Orion gets to the moon and does its thing out there and comes back and lands in the Pacific safely and we recover it, that is the total mission,” Christopherson said.

The Boeing Corp., which in May announced it would move its headquarters from Chicago to Arlington, is the lead contractor on the 38-story SLS core. Originally expected to launch four years ago, technical challenges led to delays and cost overruns, and Boeing has faced other stumbles with its Starliner space capsule and commercial airline business.

NASA Inspector General Paul Martin testified before Congress this year that Boeing exhibited “poor planning and poor execution” on the SLS project, miscalculating the scope of the project and experiencing welding problems and other issues. John Shannon, a Boeing vice president who oversees the SLS program, said the company faced infrastructure problems at a facility where NASA wanted it to build the rocket and blamed a supply chain that had “atrophied,” according to The Wall Street Journal.

Boeing’s contract for designing, building and testing the SLS is valued at about $12 billion. The contractor is working with Colorado-based United Launch Alliance on the Interim Cryogenic Propulsion Stage, which will propel Orion to the moon.

The SLS core arrived at the space center in April 2021, following testing. The contractor also added tree seeds to the mission’s “official flight kit” that will be distributed later to teachers and schools, Mashable reported.

Another contractor involved in Monday’s launch includes Reston-based Science Applications International Corp. SAIC has received more than $500 million in contracts for safety and mission assurance, software independent verification and validation and engineering services for NASA, including for the Artemis program and is also involved with Artemis’ launching system, lunar gateway, the Orion crew vehicle and the Human Landing System.

“As some wise person once told me, ‘No one remembers all the scrub launches. They remember a failed launch,” Poist said. “No matter how many you scrub, as long as you’re looking for success on the other side of it, then you’re in good shape.”

Sally Richardson, a senior program director with Falls Church-based Northrop Grumman, will also be looking to the other end of the Artemis I mission, including data gathered during the mission on radiation in the crew habitat. Richardson leads the program building the Habitation and Logistics Outpost (HALO) module, the pressurized crew module and docking port for NASA’s Gateway, a space station that will be in orbit around the moon and function as a multipurpose outpost and staging platform for lunar and deep space exploration missions.

HALO is expected to launch in later 2024 or 2025 from a Falcon Heavy rocket. Though it won’t launch as part of an Artemis mission, the HALO module will play a critical role, serving as a pressurized crew habitat and docking port for Orion and other vehicles. Northrop received a $935 million contract from NASA in 2021 for HALO.  Its design is based on Northrop’s Cygnus spacecraft, which delivers supplies and equipment to the International Space Station.

“We’re doing a lot of research with the HALO module from the standpoint of radiation, to understand the environment for crew and to determine what is really required for these deep space missions long term,” Richardson said.

HALO completed its critical design review this month, which gives Northrop Grumman the green light to begin production, Richardson said. The contractor also hit another milestone this month when it completed an acceptance review of flight batteries in Japan.

HALO’s pressurized structure is being built in Italy by Thales Alenia Space. The company is completing hardware testing; Northrop Grumman expects delivery in summer 2023, Richardson said. Once delivered, the contractor can start outfitting for full build, which will occur in Arizona. Preliminary testing is being conducted in the company’s Dulles facility.

The federal contractor is also involved in other NASA space missions in support of the agency’s moon and Mars programs. In March, NASA ordered six more resupply missions to the International Space Station from Northrop Grumman as part of its Commercial Resupply Services-2 contracts, bringing its total up to 14.

With launch parties planned around the globe, there’s little doubt the world will be watching Monday, maybe breathlessly, as history unfolds. Given the magnitude of the day, and the culmination of the work it represents so far, Christopherson said he, too, just may find himself holding his breath, at least during those first 126 seconds after liftoff.

The launch’s two-hour window opens at 8:33 a.m. EST and can be viewed on NASA’s website. 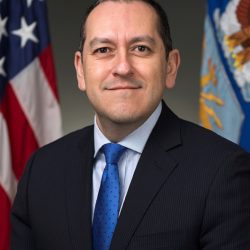 Biden will nominate SAIC senior VP as Army under secretary