Like many industries, law firms are taking a fresh look at hiring and retaining a new generation of employees who better reflect the racial, ethnic and gender diversity of today’s society at large.

This move toward diversity and inclusion has been more pronounced since The Coca-Cola Co. announced in January a new policy mandating that at least 30% of work it contracts from law firms must be performed by “diverse attorneys.” And of that amount, at least half of the billable hours must be earmarked for Black lawyers.

Many law firms have diversity plans and committees, “but Coca-Cola is saying they’re not seeing enough movement [from law firms]. So, they are setting down markers,” says A. Benjamin Spencer, dean of the William & Mary Law School.

Penalties for missing those targets will be severe, says Richard Ottinger, president of the Virginia Bar Association and a Norfolk-based partner at Vandeventer Black LLP. Under the new policy, he explains, firms not meeting Coca-Cola’s standards “could lose almost a third of their fees” and eventually even lose Coke as a client.

Spencer sees Coca-Cola’s announcement as a strong indication that “if law firms want to be competitive in the corporate world, they have to have diverse talent within their ranks.”

Richmond-based McGuireWoods LLP has been a “standout” in acquiring and developing a new generation of diverse legal talent, says Spencer. The firm has 1,000 lawyers in 21 offices worldwide.

Coca-Cola is “a highly valued client of the firm,” says McGuireWoods Managing Partner J. Tracy Walker IV, adding that the firm shares the beverage company’s goal “to drive real change in our industry.”

In the wake of the May 2020 killing of George Floyd by Minneapolis police and the subsequent wave of Black Lives Matter protests, law firms must take stronger action to address issues of inclusion and racial justice, Walker says. That requires developing a culture that is attractive to lawyers of color, as well as to members of other underrepresented groups.

To achieve that, McGuireWoods tries “to be flexible and holistic in our hiring practices,” he adds. Overly rigid practices may limit the diversity of the law students who are hired, so the firm considers “a wide variety of factors in selecting who to make job offers to, and we start off the process with a diverse recruiting committee.”

As a result, McGuireWoods has achieved Mansfield Rule Certification, which means it has met goals for increasing diversity among new partners and in senior leadership and governance positions. It also requires that at least 30% of the candidates for such roles must be diverse — including Black, female or LGBTQ attorneys or people with disabilities. The certification was created by Diversity Lab, an incubator aimed at encouraging ideas to boost diversity and inclusion in the legal profession.

The Richmond-based Leadership Council on Legal Diversity, a membership organization of more than 350 law firm leaders focused on creating diversity in the profession, sponsors a scholars’ program that provides diverse first-year law students with real-world experience. Participating students at McGuireWoods split their summers between working at the firm and working in the law departments of one of McGuireWoods’ clients to give them a broader experience of the profession, Walker says.

“It’s one part of our pipeline building. It’s the best of both worlds. [Students] have research projects, they see what it looks like from an internal client’s point of view,” Haynes says of the summer program. “They sit in on board meetings. It gives them an insider’s view.”

As director of talent management at
Richmond-based law firm Williams Mullen, Cinnamon A. Baker oversees diversity and inclusion initiatives for the firm, which has approximately 240 attorneys. She says it’s important for firms to have a diversity and inclusion strategic plan that is communicated to candidates as well as the firm’s employees.

To expand the talent pool of next-generation candidates to include racial and ethnic minorities as well as LGBTQ people and people with disabilities, Williams Mullen has an annual diversity fellowship program for two first-year law students, Baker says. The firm also has affinity networks designed to provide a space for lawyers from diverse backgrounds to provide mutual support to each other in managing their careers. And Williams Mullen is involved with groups such as the Hill Tucker Bar Association, one of the state’s oldest historically African American bar associations, and the Metropolitan Richmond Women’s Bar Association.

Baker and Ottinger both have found a small silver lining to recruiting during the COVID-19 pandemic: The need to conduct interviews virtually has enabled them to reach beyond their traditional campus networks and connect with a wider range of students.

Hiring, however, is just the first step in building diversity and inclusion, Walker emphasizes. “Retention and promotion are equally, if not more, important.”

McGuireWoods works to ensure that lawyers from all backgrounds “have a meaningful opportunity not only to work on our clients’ most important matters, but to lead our client/matter teams,”
he says.

Having good role models has been key to retention, according to Walker. New associates want to be able “to see the person ahead of [them] who is having success, whether it’s women, lawyers of color or LGBTQ lawyers.” McGuireWoods’ chairman, Jonathan Harmon, is Black and has spoken out publicly against racism and discrimination, notably in a June 2020 column published by The Wall Street Journal.

Norfolk-based Vandeventer Black, which has about 60 attorneys, has lost some minority associates to opportunities at bigger firms in larger cities such as Atlanta, Ottinger says. That has enabled the firm to concentrate more on retention and promotions. “We’ve changed our focus. We’re not just trying to find them. We want to give minority associates a roadmap so that they will be able to see a path, a future.”

Vandeventer Black has established a diversity committee that “spends a lot of time and effort creating a welcoming environment for all minorities, all genders. … It takes a lot of work but it’s paying off. It’s almost a snowball effect,” he adds.

To better understand how to retain members of underrepresented groups at Hunton Andrews Kurth, Haynes says she took an introspective look at how she has managed to succeed as an African American woman — a “unicorn” in the legal profession.

Haynes believes the answer has been “the sponsors I’ve had in my life, the senior white men and women who took the time to help me have learning experiences. I received that tutelage organically.” Now she’s trying to re-create the experience on a broader scale with a program pairing experienced mentors with minority attorneys.

“So many people leave the practice. They feel isolated. Pressures make the experience uncomfortable and inauthentic,” she says. What they need is “a partner/sponsor to meet with, to talk with about what’s on their plate — someone to be giving them feedback, looking after them.

“It’s time-intensive. It’s a real investment,” she says, but it’s an investment that pays dividends in building a new, diverse generation of lawyers.

Although “there is a burden on women in the law like there never has been before” because of the pandemic, Baker says she has not seen a trend of women dropping out of the workforce.

Virginia law schools are doing their part to create a pipeline of diverse legal talent for the future.

“Our faculty will help teach some undergraduate courses. Students will spend the summer with us at the law school. We will provide funding,” says Kenneth Randall, who became dean of the Arlington-based law school in December.

Tuition and debt concerns often are barriers for law students from diverse backgrounds and students who are the first ones in their families to attend law school.

George Mason has been studying tuition forgiveness for young lawyers but hasn’t taken any steps yet, Randall says.

“We address that on the front end” by keeping tuition low and giving out scholarships, he says. “We don’t make loans to students, but we more than cut [tuition] in half with scholarship money we give out.” That way, “students graduate with lower debt.”

Washington and Lee School of Law offers several scholarships that are specifically designated for members of underrepresented minority groups.

In the past, tuition aid at William & Mary Law School in Williamsburg was “not focused on people from particular groups,” but A. Benjamin Spencer has changed that since he became the school’s dean (and the first African American dean of any school at the university) in July 2020. Now, Spencer says, the law school offers “financial aid designated for students applying from historically Black colleges and universities, first-generation students and students with a demonstrated commitment to racial and social justice.”

Through the University of Virginia School of Law Loan Forgiveness Program, qualified applicants may be eligible to receive benefits equal to 100% of loan repayment obligations for their law school loans.

The goal of this type of aid, Spencer says, “is to incentivize people to go into low-paying positions to help people as a lawyer. It’s to serve the underserved.” 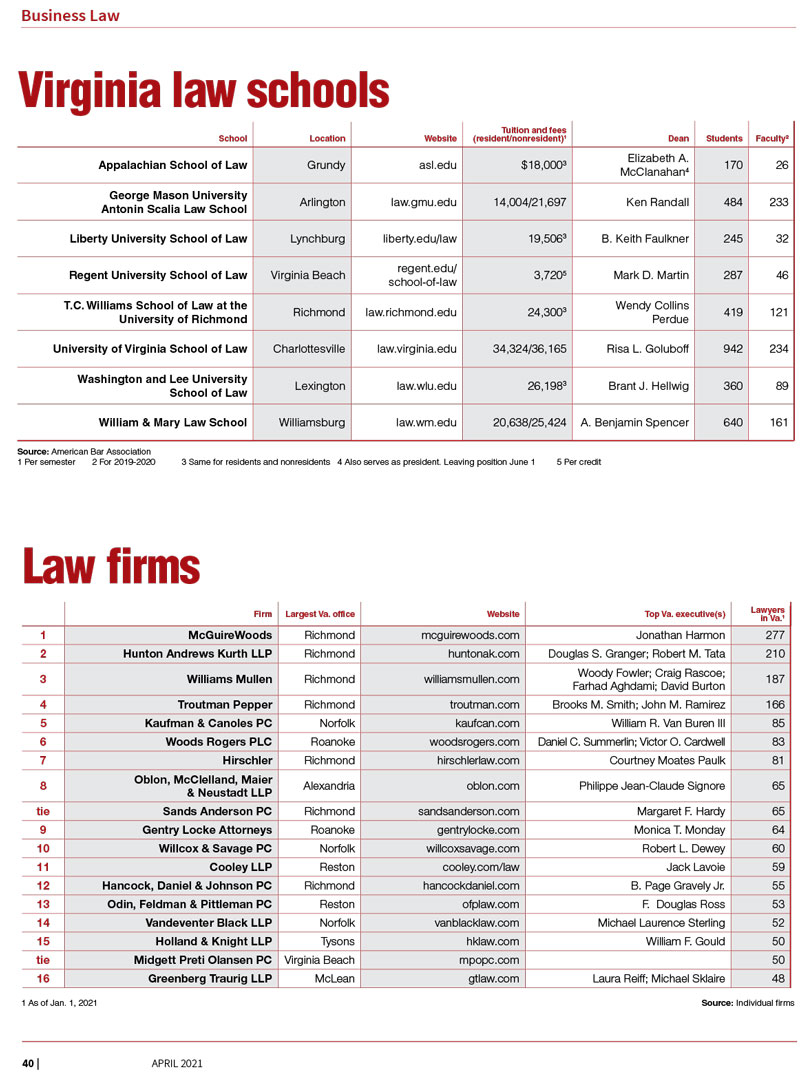 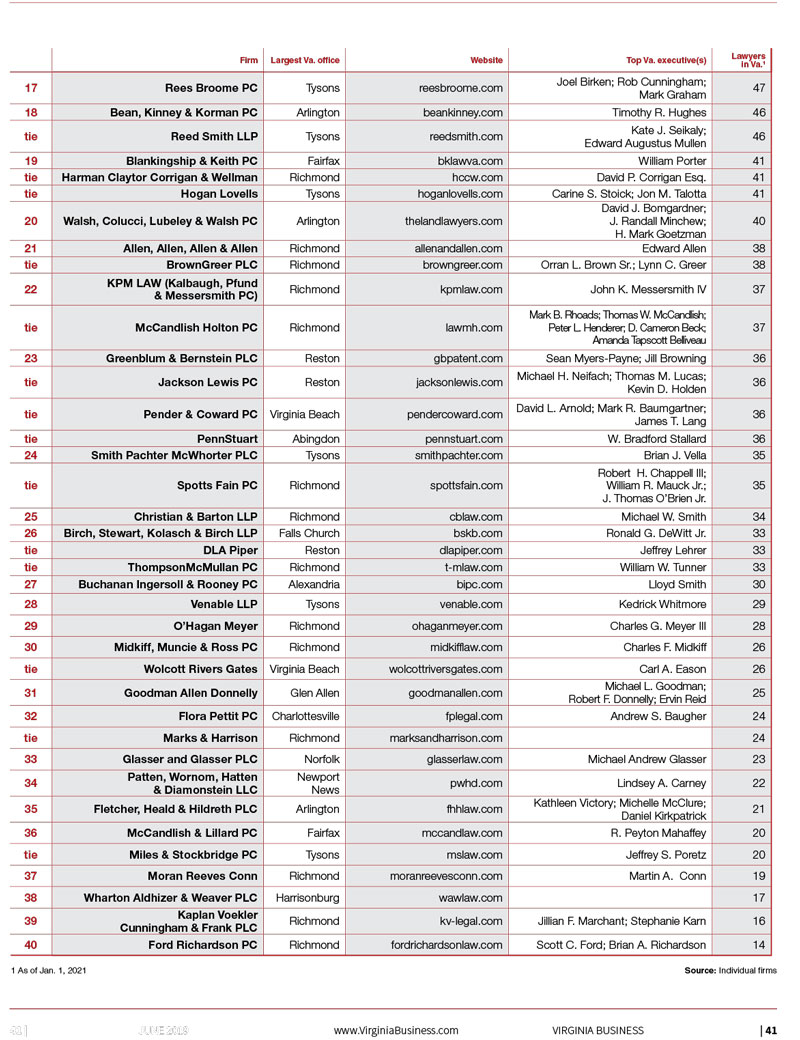