Apartment buildings open at The Boro in Tysons 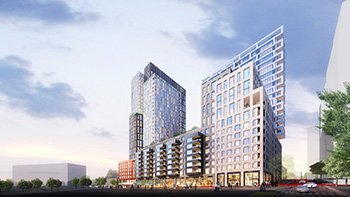 Two new apartment buildings in The Boro, a 15-acre mixed-use development in Tysons, are ready for tenants.

The Rise and Bolden buildings offer more than 500 apartments.

Both apartment communities sit atop a Whole Foods Market and are within walking distance of the Greensboro Metro station, Tysons Galleria and Tysons Corner Center.

The Bolden building has 133 residences, while the Rise building features more than 400 apartments.

Amenities include a fitness center, yoga studio, a pool with sun deck and lounging areas, a club room with entertainment, kitchens and a private dining area; an indoor bike room and fix-it station, a “bark park” and pet spa, and a 24-hour concierge.

Another residential site at The Boro, Verse, is expected open to later this fall. The 25-story tower will have 140 one-, two- and three-bedroom condominiums.

The Boro is being developed by The Meridian Group, based in Bethesda, Maryland, and Kettler, which is based in McLean.