Many major projects unfold as region diversifies its economy

The developers of the revamped Waterside District on the Elizabeth River expect it to become “Norfolk’s living room.”

When it opens on May 4 after a $40 million facelift, the venue will include an 8,000-square-foot mixed-use space for weddings and corporate events and a number of restaurants new to Hampton Roads. The site’s focal point, though, will be The Market, a 30,000-square-foot, two-level area featuring a variety of eateries and craft breweries. “We feel that Waterside has a good opportunity to be a destination as well as a local hangout,” says Glenn Sutch, Waterside’s president.

When it originally opened in 1983, the site, then called Waterside Festival Marketplace, signaled the beginning of a renaissance in downtown Norfolk. Waterside, however, ultimately became a victim of the redevelopment it spurred. Overshadowed by the MacArthur Center mall and Granby Street’s array of fashionable restaurants, Waterside’s fortunes waned. In 2013, city leaders turned to The Cordish Cos. for Waterside’s redevelopment. The Baltimore developer has a track record of successful projects in its hometown and Charleston, S.C.

“We own the property and run it as well,” Sutch says. “We care about how everything is run and oversee every activity and make sure everything is spot on at the end of the day. That is going to be the difference.”

The Waterside District joins a list of big-ticket projects springing up in Hampton Roads. The group includes the $175 million Main Hotel and Conference Center in Norfolk, a proposed $220 million privately owned arena in Virginia Beach and the $450 million Tech Center in Newport News, a 100-acre, mixed-use development that combines research labs with shops, apartments and entertainment.

These projects signal a wave of investment in Hampton Roads and a new emphasis on diversifying a regional economy long dependent on defense spending.  “We truly are at a strategic turning point,” says Bryan Stephens, president and CEO of the Hampton Roads Chamber of Commerce. “Over the next 18 months to two years, you’ll see a juggernaut of economic activity in Hampton Roads. It’s the fruits of a lot of hard labor over the last couple of years. Success begets success and is a harbinger of things to come.”

Stephens believes the big projects will help draw more interest in Hampton Roads. “This is a fabulous place to relocate companies,” he says, noting the region’s efforts to attract industry clusters such as biomedical, cybersecurity and advanced manufacturing while continuing to support the military. “We’re leveraging our assets to diversify the economy.”

Still below its jobs peak
Diversification is expected to help stimulate a regional economy that still lags behind comparably sized areas in recovering from the economic downturn that began nearly a decade ago. The Old Dominion University Economic Forecast for 2017 shows Hampton Roads can expect to add 3,800 jobs this year. That gain still would leave the region below its peak of 775,000 jobs in 2007.

Rick L. Weddle, president and CEO of the Hampton Roads Economic Development Alliance, says the region may not return to that peak until the end of 2018.   He attributes the region’s recent sluggish economic pace to its continued dependence on military and federal spending. “About 65 percent of business services are military related. When military and federal spending continues to be down, it restricts growth,” he says. “There’s the notion that if we wait long enough, the military will build up and solve the problem, but that’s not prudent. We have to diversify the economy by identifying sectors that are not military dependent and accelerate their growth.”

HREDA has crafted an ambitious five-year strategy to attract diverse businesses to the region and create 71,000 jobs, including 32,000 higher-wage positions in industries such as corporate, professional and financial services, health care, manufacturing, and maritime and supply chain management. 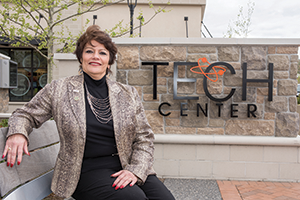 Florence Kingston, Newport News’ economic development director, agrees that Hampton Roads must reduce its reliance on the military. The city already is home to firms such as Canon Virginia and Alion Science & Technology, and construction soon will be underway on the first research building at Tech Center Research Park, a 50-acre site adjacent to the Thomas Jefferson National Accelerator Facility.

Emphasizing entrepreneurship, the park, part of the 100-acre Tech Center, will provide 1 million square feet of office and laboratory space for high-tech companies performing advanced research. “We have a good cluster of companies that do advanced manufacturing, and we’re building a welcoming environment of smaller business startups through the Tech Center,” Kingston says.

Meanwhile, Newport News Shipbuilding, the state’s largest industrial employer and sole builder of naval aircraft carriers, plans to add 3,000 employees. The company is expected to benefit from President Donald Trump’s plans to expand the Navy, including adding another aircraft carrier to its current fleet of 11.  “We’ve got to support that,” Kingston says, “but not forget the need to focus on other diversification and growth to balance out military spending.”

Weddle believes Hampton Roads can play off Newport News Shipbuilding’s expansion without becoming further dependent on military dollars. “We need to build on our military strength but not rely on it by marketing the region during more prosperous times and investing in infrastructure, sites and facilities, education and training as the region prepares for non-military dependence,” he says.

ADP and an arena 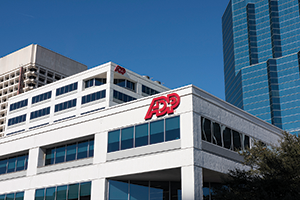 In addition to the opening of The Main and Waterside, Norfolk is raising its profile with a big jobs boost from New Jersey-based ADP (Automated Data Processing). The human resources company plans to hire 1,800 employees to staff a hub in downtown Norfolk. ADP has invested $32.5 million in revamping 286,000 square feet of a formerly empty office tower.

Retailers also are attracting interest in Norfolk. The first phase of the long-awaited $75 million Simon’s Norfolk Premium Outlets is set to open this summer, and a 332,000-square-foot Ikea store will open next year.

Next door in Virginia Beach, the city has struck a deal with United States Management to proceed with the 18,000-seat Virginia Beach Arena. If everything falls in place, the privately owned facility could open as soon as 2019.

A much smaller venue, the 300-seat Zeiders American Dream Theater, is scheduled to open next spring at the city’s bustling Town Center, part of the new phase of development there that will include apartments, retail, restaurants and a public plaza.

As an added boost to the city’s Central Business District, Wegmans Food Markets plans to open its first Hampton Roads store across from Town Center.  It’s a coup for the city since Wegmans only opens three to four stores each year. “We’re very excited about it,” says Rob Hudome, senior project development manager for Virginia Beach’s Economic Development department. “The population of Virginia Beach is centered around the Central Business District and the growth of Town Center. That’s the future downtown of Virginia Beach.”

Landing point for cables
Virginia Beach also is poised to become an international digital port as the only landing point on the mid-Atlantic coast for transoceanic cables. Facebook, Microsoft and Telefonica have joined forces to build a 4,000-mile undersea cable from Virginia Beach to a data hub in Bilbao, Spain. Projected to be operational by the end of the year, the cable is intended to meet increasing demand for high-speed, reliable connections for cloud and online services. A second fiber cable running from Rio de Janeiro to Virginia Beach should be ready early next year. “It’s the highest-capacity, fastest cable to come across any ocean,” says Hudome.

The new generation of cables creates a need for data centers. First up is Globalinx Data Center’s 10-acre, 138,000-square-foot data center at Corporate Landing Business Park in Virginia Beach. NxtVn, a Dutch firm, also plans to build a data center park off General Booth Boulevard. NxtVn also wants to invest in another cable, Midgardsormen, that would connect Virginia Beach to Eemshaven, Netherlands.  “Virginia Beach is geographically in the right spot,” Hudome notes. “It’s a very desirable place to build a cable landing station and data center.” The industry is expected to lead to significant capital investment and job creation in Hampton Roads and the state. “This is a brand-new industry for us, so we’re still seeing how it’s going to develop, but the closer we get to the cable landing, the more interest we’ll get from data centers,” Hudome adds.

As part of the city’s efforts to expand its bioscience sector, Virginia Beach also is partnering with The Center for Advancing Innovation to create the VABeachBio Innovation Challenge.
Announced by Mayor Will Sessoms at the Virginia Biotechnology Association’s conference in the city in early April, the challenge is designed to bring together entrepreneurs, industry and inventors who will compete to turn inventions into startup companies.

The initial competition will put a big emphasis on aiding veterans.  Inventions will be selected to target and improve veteran health care, and veterans will be given priority in competing to run the companies.

Virginia Wesleyan growing
Hampton Roads colleges, universities and technical institutes are instrumental to the region’s progress as they seek to meet the needs of today’s workforce. This fall, Virginia Wesleyan College will offer its first graduate degree programs — a master’s in education and an online MBA. The private, liberal-arts college also plans to begin an online degree completion program for working adults. 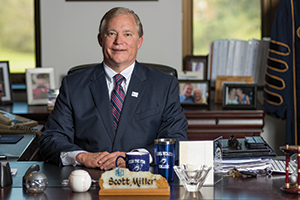 Construction is expected to start this fall on apartments for upper-level, graduate and international students and faculty and staff, while ground could be broken on a $14 million performing arts center next year. Meanwhile, applications are up significantly. Miller expects enrollment to jump from 1,400 to 1,700 students during the next three to five years.  The college also plans to become  a university later this year.

“We have a wonderful location,” he says. “The new outlet mall is within walking distance; we’re four and a half miles from the Chesapeake Bay; and there are nearby amenities such as the Virginia Aquarium. We need to use the resources of this wonderful community to grow the college.”