An overview of Hampton Roads

Stats and numbers for the region

With a population of 1.79 million people spread across 17 localities, Hampton Roads is the second-most populated region of Virginia, just behind Northern Virginia. Virginia Beach, with approximately 457,000 residents, is the commonwealth’s biggest city by population, and neighboring Norfolk has the highest density in the region, with 4,467 people per square mile, according to 2020 U.S. Census data.

To outsiders, the Hampton Roads region is perhaps best known as the home to more than 120,000 active-duty and reserve military members, as well as the Port of Virginia, Huntington Ingalls Industries Inc. and Newport News Shipbuilding, all major economic engines. Tourism — particularly at Virginia Beach’s Oceanfront — is another big driver of dollars, and Norfolk and Portsmouth are betting on two forthcoming casinos to help their cities strike it lucky.

The region also has its fair share of colleges and universities, ranging from the nation’s second-oldest school, William & Mary, to Tidewater Community College, which spans four cities.

CEOs and leaders comment on Hampton Roads' present and future 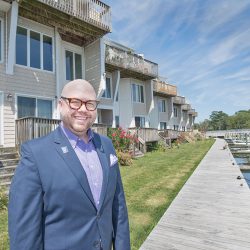