Charlottesville has made news in recent months for its positions on hot-button issues. City Council has tried to boot a Confederate statue out of a downtown park, and the mayor has declared Charlottesville a “Capital of the Resistance” to President Trump’s immigration policies.

Less well known, however, is the city’s growing reputation as a hub for entrepreneurs and high-tech companies. That storyline doesn’t capture as many headlines.

Critics of the city’s equestrian statue of Confederate Gen. Robert E. Lee consider it a symbol of racism. Charlottesville City Council voted 3 to 2 on April 17 to request bids to buy the statue, which now sits in the center of Lee Park just north of the downtown pedestrian mall. Asking for bids gives the council “some control over where it goes,” says Miriam Dickler, the city’s spokeswoman. “Their preference is that it go to a historical or academic site.”  In early May, however, a Charlottesville Circuit Court judge issued an injunction prohibiting the sale for at least six months after a lawsuit was filed by removal opponents. The plaintiffs argue that state law protects war memorials.

The injunction does not block the city's plan to conduct an online contest to rename Lee Park and nearby Jackson Park, where the statue of Confederate Gen. Thomas J. “Stonewall” Jackson stands.

Debate over the Lee statue has sparked demonstrations for and against its removal. In mid-May, white nationalist Richard Spencer led a torch-lit protest rally at Lee Park that was widely condemned for evoking images of the Ku Klux Klan.  A candlelight counter demonstration was held the next day.

A ‘welcoming’ city
Charlottesville also has weighed in on national issues. At a January news conference, Mayor Mike Signer said he had talked with the city's commonwealth’s attorney about the legal challenges on immigration it might confront in the months and years to come.  “All cities work with their prosecutors and their police to find the approach on immigration that best fits their local needs,” he said. “I plan on asking Charlottesville’s City Manager to advise City Council on all our legal options to protect immigrants and refugees — particularly if the administration’s approach becomes even more draconian.”

The council later voted to become a “welcoming” city in which “all members of the community are considered neighbors and deserve protection,” according to Dickler. To that end, the council decided to give $10,000 to the private Legal Aid Justice Center to work with immigrants in the city.

Speaking at Charlottesville’s Tom Tom Founders Festival in April before about 250 leaders of small and midsize cities across the country, Signer spelled out his vision of Charlottesville as a welcoming city. He said cities are facing “waves of disruptive changes,” that include new technology, autonomous cars, gay marriage, medical advances and an influx of refugees.

“A lot of changes scare a lot of people, and we see people reacting to the change in different ways,” including fear and rejection, Signer said. “They can react with optimism or pessimism to these changes. The city we’re creating is casting its lot with optimism, openness and creativity.”

Low vacancy and jobless rates
The city’s controversies have  not hurt its economy.  Retail vacancy rates hover between 2 and 3 percent. On the downtown mall, it sits at 2 percent. The reason? “The downtown mall is a unique, authentic, vibrant space that attracts people,” says Chris Engel, the city’s director of economic development. “The city took a fairly significant risk when it built the mall 40 years ago and it worked.” Charlottesville’s unemployment rate in March was 2.9  percent. “On the surface, that’s good news, but companies are finding it a challenge to find skilled employees,” he says. 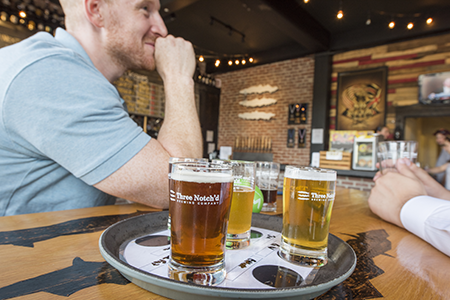 One of the city’s newer businesses, Three Notch’d Brewing Co., is growing. It is moving from its Preston Avenue location to the former Frank Ix building, a former textile factory, off the downtown mall. The company plans to expand the brewery and add a restaurant and beer garden.  Apex Clean Energy, another business new to the city, has expanded to about 200 employees.  It has joined a group of eight renewable energy companies to form the Charlottesville Renewable Energy Alliance.  The group plans to “establish Charlottesville as the renewable energy hub of the Southeast,” according to a news release.

Charlottesville’s economy is humming, in part due to entrepreneurs setting up in the city. Darden Business School Professor Mike Lenox is part of a research team looking at how cities attract entrepreneurs. At the Tom Tom Festival, he said, “We all sense this emerging entrepreneurial ecosystem here in Charlottesville … The questions are: What can we do to drive the ecosystem forward and what are the consequences? Which is the future — Austin, Aspen or Arlington? I fear if we don’t build up a robust economic ecosystem we could become purely an enclave of the rich. We could hurt the fundamental fabric of the city.”

Biotech, angel investor groups
One indicator of Charlottesville’s allure for entrepreneurs is its high concentration of  biotech companies. They have formed CvilleBioHub, an association of more than 50 bioscience companies and organizations that employ hundreds of people engaged in developing ways to improve human health.

Mikro Systems, an established Albemarle company, produces imaging products that will be flown on the Solar Orbiter, a joint NASA/European Space Agency mission to obtain close views of the sun. Mikro’s medical products are used in CT scanners to provide better diagnostic imaging at lower cost and lower radiation dosage.

Meanwhile, the region’s biggest employer, the University of Virginia, continues to build.  U.Va. Medical Center is expanding its emergency room department, adding operating rooms and building a six-story inpatient tower to provide more inpatient beds. The new construction will add about 520,000 square feet to the hospital. The projects should be completed by 2020.

U.Va. just completed its two-year, $58 million reconstruction of the school’s Rotunda, its signature building, adding classrooms and space for students to study.

The Shenandoah National Park welcomed a new superintendent, Jennifer Flynn, this year. She told the Greene County Board of Supervisors that a record 1.45 million visitors trekked to the park last year in celebration of the park’s centennial. She said $87.9 million was spent in the park and the surrounding 50-mile area in 2016.

In Louisa County, Dominion Energy installed 83,000 solar panels on 250 acres on the east side of the town of Louisa to help feed the power grid. The solar farm came on line in December.

Fluvanna County has almost completed building an advanced E911 emergency radio system that will dramatically improve coverage throughout the county. With the improvements, coverage should stand at 95 percent by early July.

In Nelson County, the huge Wintergreen Resort, which sprawls across 11,000 acres, tried to auction off its last portion of undeveloped property. Three hundred eighty-two acres of land was up for sale on an internet auction scheduled for late April, according to Tranzon, a nationwide auction company. The property, however, did not sell.

Editor's note: This story has been updated to correct an inaccurate quote from Mayor Mike Signer's January news conference.