Jim O'Farrell has been with the company since 2010

O’Farrell joined AMSG, a management and technology consulting firm with the Virginia Values Veterans (V3) certification, in 2010 as president and chief operating officer. He replaces Mike McCormick, the company’s founder.

O’Farrell has led the AMSG’s growth in federal contracts, including the Department of Veterans Affairs, Defense Health Agency, Department of Defense and several others, while helping the company scale its capabilities and business processes to address the growth in employee headcount and business partner and stakeholder relationships, according to a news release from AMSG.

“I am thrilled to be leading AMSG as the chief executive officer as we work side by side with our customers, business partners and stakeholders in the years ahead to serve their missions, continuing to build a legacy of service to our country and our communities,” O’Farrell said in a statement. “From its founding, AMSG has always been, at its core, a team of people who want to be part of something bigger than themselves – whether at work, or in our communities.”

Before joining AMSG in 2010, he held positions at KPMG Consulting, Booz Allen Hamilton, EDS and American Management Systems. He serves as the vice chair of the Armed Services Arts Partnership and previously served as chair of the U.S. Small Business Administration’s Advisory Committee on Veterans Business Affairs.

O’Farrell is a graduate of the U.S. Naval Academy and earned a master’s degree from Averett University. 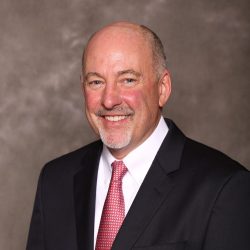 Jon Moretta joined the company in 2016