President and CEO S. Cary Dunston has retired and resigned from the board and M. Scott Culbreth, senior vice president and chief financial officer, was promoted to replace Dunston.

“Campbell … violated the company’s policies and values [and] has been separated from his position,” the company statement reads. “His separation was not related to American Woodmark’s operational or financial performance.”

“I have been privileged to be a part of the American Woodmark family for 14 years, the last five as CEO, and it has been one of the most rewarding experiences of my life,” Dunston said in a statement. “I’m incredibly proud of our accomplishments, but recent developments in both my personal and professional life have prompted me to think about the future [and] about the next generation of leadership to take the helm of this amazing company.”

Culbreth has been with the company since 2014, and had previously served as CFO for Piedmont Hardware Brands. He has also worked with Shell Oil Co., Robert Bosh Corp. and Newell Brands. He earned his bachelor’s degree in finance from Virginia Tech and his master’s degree in business administration from Washington University in St. Louis.

“I am both honored and humbled by the confidence of the board to choose me as the next leader of American Woodmark,” Culbreth said in a statement. “Our company has a strong corporate culture and talented and dedicated employees. We will continue to execute the strategy that the board, Cary and the leadership team developed, which I believe will drive continued growth and opportunity for the company.”

Paul Joachimczyk, vice president of financial planning and analysis, replaces Culbreth as vice president and CFO. Vance W. Tang, former lead independent director, has been elected as a non-executive chairman of the board of directors.

Founded in 1980 and publicly traded on the Nasdaq, American Woodmark operates 18 manufacturing facilities in the United States and Mexico, employing more than 10,000 people across its 15 brands. The company reported more than $1.65 billion in sales last year. 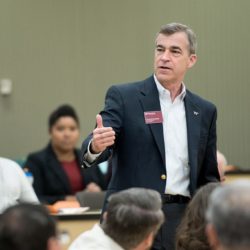 Changes to equip university for $1.5B fundraising campaign