The offering — started on crowdfunding site Republic — allows accredited and non-accredited investors to own a piece of the McLean-based company that is planning a national chain of indoor ski resorts. So far, more than 100 people — known as “snow moguls” — have signed up as investors, CEO John Emery said Wednesday afternoon, and the company has raised more than $170,000.

In May, Alpine-X released details of Fairfax Peak, a $200 million indoor ski resort proposed to be built on parts of the I-95 Landfill Complex in Lorton. The 450,000-square-foot indoor snow sports facility will have a 1,700-foot ski slope and 100-plus room luxury hotel and is expected to open in 2025. Emery and Chief Financial Officer Jim Calder were previously the CEO and CFO of Great Wolf Resorts Inc.

Over the past two weeks, Alpine-X has held two community events — one in person, one on Zoom — drawing more than 450 people, Emery said. The project is still going through the zoning and approvals process with Fairfax County officials.

“The level of interest in the community is well beyond our expectation this early in the process,” Emery said. The response to the stock offering, or crowdfunding, has been good, he added. “It’s a chance for people to have an investment in something local.”

The company plans to use net proceeds from the stock offering to fund early development costs of the first resort and plans for new markets around North America.

Emery said the next two or three proposed sites across the U.S. and Canada are in the works, but did not specify where they are yet. He said each location will roll out 12-18 months after the one before it opens.

Investors will be offered perks to the resorts, such as discounts on merchandise and lift tickets, early access to events, meetings with the founders and limited-edition apparel. 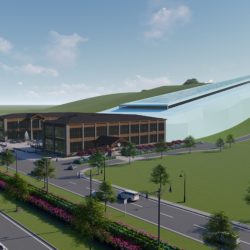 Alpine-X developers planning first facility in Lorton, with 20+ to come

EY names five Virginians as mid-Atlantic entrepreneurs of the year

McLean-based Novetta will be part of its national security portfolio