Northern Virginia Community College stands apart among the commonwealth’s public institutions of higher learning by virtue of its size and diversity and the scope of its ambitions.

With 78,000 students enrolled, it is the largest of Virginia’s public two- and four-year schools and the second-largest community college in the United States. It has six campuses, three academic centers and online studies offering certificates and degrees.

Its huge student body represents every age bracket and ethnicity and more than 200 countries worldwide, and it has a mission statement that is as expansive as its demographics. The college aims for no less than being a go-to supplier of a workforce that will power the economy of its NoVa home, while simultaneously being a place that welcomes all those who “are pursuing the American dream.”

President Scott Ralls took over leadership of the sprawling community college last year, drawn from his stewardship of the North Carolina Community College System by the opportunity to work in NoVa’s tech-driven environment.

Preparing people for work
Projections for the makeup of tomorrow’s workforce have been changing rapidly and drastically in recent years. Northern Virginia used to be a company — read, government — town, and the feds hired mainly based on a job applicant’s academic credentials. Tech jobs were important, but not transcendent. These days, IT is the region’s biggest growth area, with NoVa ranked as the second-largest STEM (science, technology, engineering and math) employment base in the country, Ralls says.

The private sector, though, unlike the government, is profit-driven and pragmatic. It wants employees who can hit the ground running, and NVCC is determined that its students will be fast out of the starting gate.

Steven B. Partridge’s job is to make sure that the college is up to speed on this objective. He is NVCC’s vice president of workforce development

“Getting people ready to go to work is a huge part of what we do,” he says. He spends much of his time talking with employers and advisory groups, including the Northern Virginia Technology Council, to gather  input on how best to get “rid of the disconnect between education and jobs.”

Cybersecurity effort
Cybersecurity is a good example of how the college has been reshaping its curricula to fit the changing job picture. Northern Virginia has evolved into the premier cybersecurity center of the nation during the past decade, yet good jobs in this burgeoning sector have been going begging for want of qualified applicants.

Until recently, NVCC hadn’t been much of a factor in closing the gap between supply and demand. Although it began offering a career studies certificate in network security as early as 2001, it had just 49 enrolled in its cybersecurity courses at the end of the fall 2014 semester. As of April this year, however, it had 750, with more expansion anticipated. 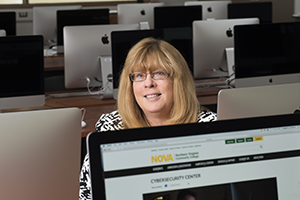 Cybersecurity professor Margaret Leary, who also is director of curriculum for the National Cyberwatch Center (a consortium of higher-learning institutions devoted to cybersecurity), says that NVCC works with the Department of Homeland Security and the National Security Agency on course content and standards. The feds’ seal of approval on future employees is vitally important to government contractors who continue to make up a big, if somewhat diminished, chunk of NoVa’s economy. In addition, the government has designated NVCC’s cybersecurity program as a center for academic excellence, which helps ensure that the credits students earn at the two-year college are fully transferrable.

Leary’s cybersecurity students, like the school’s student body population in general, have goals as varied as their backgrounds. Some plan to go straight to work after earning their associate degrees. Others plan to continue in four-year institutions.  Still others already have four-year degrees, yet either are in search of hands-on training or want to switch careers.

Amy N. Thomas, 48, is an example of one of these typically atypical NVCC students. She had been doing grant writing for nonprofits when she took a career test. Thomas was startled to find that she scored higher on computers than on writing. That led her to take a class at NVCC where she “fell in love with the whole field.”

Five semesters later, Thomas had an associate degree in applied science and cybersecurity, and in May, she and her partner, Immanuel Silva, showed off their cyber chops by winning second place in the inaugural Black T-Shirt Cyber Forensics Challenge. The contest, sponsored by  colleges and private industry,  attracted 900 teams nationwide and tested such skills as file system and operating system identification, recovery of operating systems and event reconstruction. Thomas now works for the Alexandria Public Schools system and says she is getting lots of interest from recruiters.

Focus on diversity
Career placement is NVCC’s stated No. 1 mission, but it gives equal importance to “increas[ing] the number and diversity of students being served” and to being “a leader in developing educational and economic opportunities for all Northern Virginians.”

That is a tall order, considering that Northern Virginia is quite the melting pot. As of fall 2014, 39.5 percent of the community college’s students were white, 20.7 percent were Hispanic, 17.9 percent were black, and 15.3 percent were Asian. Another 3.6 percent were of two or more races. As Ralls notes, the school has a minority majority.

The survey further showed that only 42.1 percent of students fell into the traditional college age category of 18- to 21-year-olds, while 30.6 percent were between 22 and 29, and 23 percent were 30 or older.

To help this array of individuals achieve success, NVCC strives to foster an environment of inclusion and support through two special enterprises:  Pathway to the Baccalaureate and Adult Career Pathways. Kerin A. Hilker-Balkissoon, the executive director of both initiatives, says that together they now serve 14,000 students.

Under the auspices of the baccalaureate program, NVCC works with George Mason University, K-12 schools, nonprofits, social services groups and employers to “create pipelines for students to come and successfully compete.” GMU smooths the way for participants by waiving their application fees and offering them various uses of its staff and facilities.

Admission to the baccalaureate program is based on desire, not GPA. “We look at drive and determination,” Hilker-Balkissoon says. Applicants must write a statement about intent, and, if accepted, fulfill supplemental responsibilities such as mandatory community service and attendance at various workshops. In return, they get one-on-one coaching on everything from applying for scholarships and financial aid to dealing with the “transfer shock” that they may experience when moving to a four-year school.

Monica P. Gomez has been a baccalaureate counselor for 10 years. She is usually responsible for four or five high schools and carries a caseload of 300 to 350, mostly Latinos, Asians and Middle Eastern students, she says.

The result is that about 70 or 75 percent of her charges make it through the program. Statistics of how many achieve the ultimate prize of a four-year degree, however, are hard to come by  because  community college students are notoriously hard to track, given that many are part time and do not necessarily take classes every semester.  Nonetheless, Gomez is able to proudly point to the achievements of one of her students, David, who went through NVCC, won one of only 85 Jack Kent Cook undergraduate transfer scholarships offered nationally, graduated from Cornell, and now is in graduate school at Brown University.

The Adult Career Pathways’ focus is on helping students “upskill to better-paying jobs,” Hilker-Balkissoon says. It targets veterans — more than 5,000 are enrolled at NVCC — single parents, immigrants and the unemployed or underemployed. It also reaches out to faith and interfaith organizations, nonprofits and community groups, not only to foster college awareness but also to help support people who may never have thought higher education was an option for them.

“There are so many nonacademic issues going on in their lives that can derail them,” Hilker-Balkissoon says about those in Adult Pathways.  “Many are one flat tire away from dropping out of college.”

More emergency funding to help these students, she says, is her next priority.

Money, unfortunately, may be a tad tighter than it has been in the past. Nationwide, enrollment in higher education has gone down from a peak about five years ago, and funding is driven by the numbers.

“We reached a plateau five years ago,” Ralls says, “And in the last two years we’ve had some drops, but at a quarter of the rate of most other schools.

The reason behind the decline, he says, is a “good news/bad news” scenario.

The bad news is that as work opportunities have expanded, students, particularly older, working ones, feel the need to take fewer courses.

The good news is that the companies that are hiring need more highly skilled technology workers than ever. That fact alone would seem to promise that Northern Virginia Community College should enjoy its own version of cybersecurity in years to come.