Home News Reports Fantastic 50 Ahead of the boom 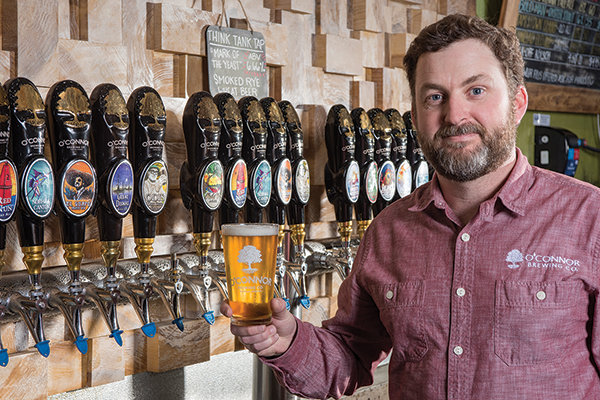 Kevin O’Connor has had a passion for brewing beer since making his first batch in college. In 2009, he turned that hobby into a business, founding O’Connor Brewing Co. in Norfolk.

“We were one of the earlier breweries out there,” he says, noting the company began making beer on St. Patrick’s Day in 2010. “A lot of our success is based on getting out there before the big craft-beer boom.”

The company’s revenue growth rate from 2012 to 2015 was 356 percent, the highest rate among manufacturers on the Fantastic 50 list.

O’Connor also credits the company’s growth to the work of his 31 employees. “We put good people in the right places and let them blossom,” he says.

In addition to these staples, the brewery produces other varieties of beer. “Last year we brewed about 26 different beers,” O’Connor says. “This year we will have around 26 to 28 beers. You have to bring in new beers to stay fresh, so 10 of our beers will be brand new this year.”

The brewery’s 35,000-square-foot facility in an industrial section of Norfolk’s Ghent area includes a tasting room, which is open seven days a week.

“We make about 3,000 gallons of beer a day.  At our busiest time, we were able to pump through about 5,000 gallons,” O’Connor says. “Probably in the early second quarter of this year, we will add another row of tanks.”

“We have been in talks with distributors in Raleigh, Durham, Annapolis, Md., and Baltimore,” O’Connor says. “My goal has always been that I am going to do this as far as the consumer will take me.”