A new conference for the controlled environment agriculture (CEA) industry will debut Oct. 25 at the Institute for Advanced Learning and Research (IALR) in Danville.

One goal behind the event, dubbed CEA Summit East, is “highlighting some of the CEA growth that’s happening in Virginia — and particularly in Southern Virginia,” according to organizer Kaylee South.

Sure to be a topic of discussion at the conference: New Jersey-based AeroFarms, which this year opened a 138,670-square-foot, $53 million vertical farm in Pittsylvania County. Located in Cane Creek Centre, a joint industrial park owned by the city of Danville and Pittsylvania County, the AeroFarms facility is expected to create more than 150 jobs and has been promoted as the world’s largest indoor vertical farm of its kind. Roger Buelow, chief technology officer for AeroFarms, is the keynote speaker for CEA Summit East.

The conference will be jointly run by the Controlled Environment Agriculture Innovation Center — a joint Virginia Tech-IALR center located on the IALR campus — and Indoor Ag-Con, a national CEA trade show and conference.

“At the highest levels in the state, they’re interested in CEA,” says Scott Lowman, vice president of applied research at IALR.  “So, we feel like we’re doing our part to help bring everybody together.”

South, one of the conference’s organizers, is an assistant professor in Virginia Tech’s School of Plant and Environmental Sciences but is based at the Controlled Environment Agriculture Innovation Center in Danville. She expects the conference to attract about 250 attendees.

“I’m really excited to just meet people in the industry and have the chance to bring together industry and academia people,” she says.

It can be as simple as using hoop houses (hoops positioned over crops and covered by plastic) or as sophisticated as vertical farms, where plants are grown indoors, stacked vertically on shelves, improving food safety and requiring less water and pesticide.

Founded in 2002 as an economic development engine for Southern Virginia, the IALR houses research initiatives and provides workforce training and conference facilities. 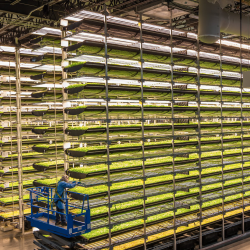 Property sold to MDH Partners, leased back to AeroFarms