One of Richmond’s grandest bank buildings turns 100 this year, and it begins a second century as a converted apartment building. The adaptive reuse of the First National Bank Building at 823 East Main St. adds more than 100 new apartments and amenities to downtown Richmond’s urban lifestyle.

According to Commonwealth Architects in Richmond, the $30 million renovation is complete.  Commonwealth teamed with owner Rushmark Properties and HITT Contracting Inc. to transform the city’s first skyscraper into a mixed-use development.

“The new FNB apartment community is a great addition to the ongoing urban redevelopment downtown. This project provides a quality residential living experience within walking distance of dining and entertainment, reuses one of our city’s architectural treasures and contributes to the revitalization of downtown Richmond,” Robert Burns, a principal at Commonwealth Architects, said in a statement.

Built in 1913, the bank building is an example of turn-of-the- century Neoclassical Revival architecture. The 19-story tower is listed on the National Register of Historic Places and was the city’s tallest building for years.

The conversion of the 300,441-square-foot building provides 154 apartments with amenities including a fitness center, community room, game room, secured garage parking and 6,289 square feet of commercial space. Some of the penthouse apartments offer panoramic views of downtown Richmond and the James River. 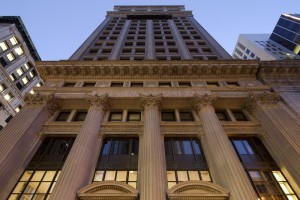 As part of the project, the bank’s lobby was restored. It has rusticated marble walls with a coffered ceiling, marble-clad columns and intricately etched bronze elevator doors. The vault room that contains two handmade circular vault doors will remain as part of the commercial tenant space ― reminders of the building’s financial history.