A year of transition

Norfolk is arming itself for a major win.

In early February, city council approved $5 million in incentives to attract Automatic Data Processing, a Fortune 500 company, which could bring 2,000 jobs to the city, according to The Virginian-Pilot.

The New Jersey-based company would occupy a downtown building, 2 Commercial Place. The building is part of a $100 million City Walk project that also includes the Bank of America building.

HREDA is “focused on improving cooperation and collaboration within the region and ways to better market our position and our region,” says Kevin Sweeney, HREDA’s interim president and CEO. Sweeney, a retired Navy rear admiral, joined the organization in March 2015 and will be leaving this year. “We are very bullish on the unique assets we have here in Hampton Roads. We are going to be very aggressive in 2016 and expect impressive results.”

Haulotte moved its North American headquarters from Frederick, Md., to an 83,000-square-foot facility in Virginia Beach. It is expected to create 66 jobs within 36 months. The company is a subsidiary of France-based Haulotte Group, the third-largest manufacturer of aerial work platforms, such as industrial scaffolding and lift systems.

Last year, Virginia Beach saw a total capital investment of $350 million from projects that are expected to create about 1,300 jobs.

One of the city’s biggest developments last year was a deal with United States Management (USM), a part of The ESG Cos., to develop an arena seating more than 15,000 people. It would be used to attract shows, concerts and other events. (See related story on Page 18.)

Norfolk had a strong year in 2015 as well. “We’ve had a tremendous amount of activity, and we think that will be bearing a lot of success in 2016,” says Chuck Rigney, the city’s director of development.

The city’s economy got a boost from Colonna’s Shipyard Inc., which will invest more than $30 million to expand its operations, creating 51 jobs. In addition, Philadelphia-based engineering and information technology firm CDI relocated its Virginia Beach operations to Norfolk, adding 168 jobs.

The city also began the long-awaited $75 million, 350,000-square-foot Simon outlet mall project, which will house more than 90 stores. It is expected to create 300 construction jobs as well as 800 permanent jobs.

Other projects include Waterside District, a $40 million rebranding of Waterside Festival Marketplace by The Cordish Cos., and The Main, a $164 million public-private initiative. It includes a 300-room Hilton hotel and conference center scheduled to open in 2017. It will create 1,500 construction and permanent jobs.

Early last year, Newport News announced that Canon Virginia will spend $100 million to expand its operation in the city. “We started the year with a bang,” says Florence Kingston, director of the Newport News Department of Development.

The city has worked with Jefferson Lab on its bid to build a $1 billion electron-ion collider. The lab is one of two facilities being considered for the project. If it is chosen, the project is expected to have a $4 billion economic impact on the region.

Retail projects in the city included new restaurants at the Marketplace at Tech Center, part of a 100-acre, mixed-use $450 million development.

Portsmouth saw more than $160 million of private investment last year. “One hundred million of that was in downtown in multifamily housing that has finished construction, was under construction or is under contract,” says Mallory Butler, the city’s director of economic development. The eight downtown projects represent 770 multifamily units.

In addition, the Port of Virginia has plans to expand Virginia International Gateway and ultimately develop the Craney Island expansion. Those plans have spurred growth around the port area, including an estimated $5 million investment by Harrisonburg-based InterChange, a third-party logistics firm and distribution facility.

The city’s maritime industry also will  benefit by the more than $3 million investment Virginia Beach-based PER Properties is making to develop a granary on the southern branch of the Elizabeth River. 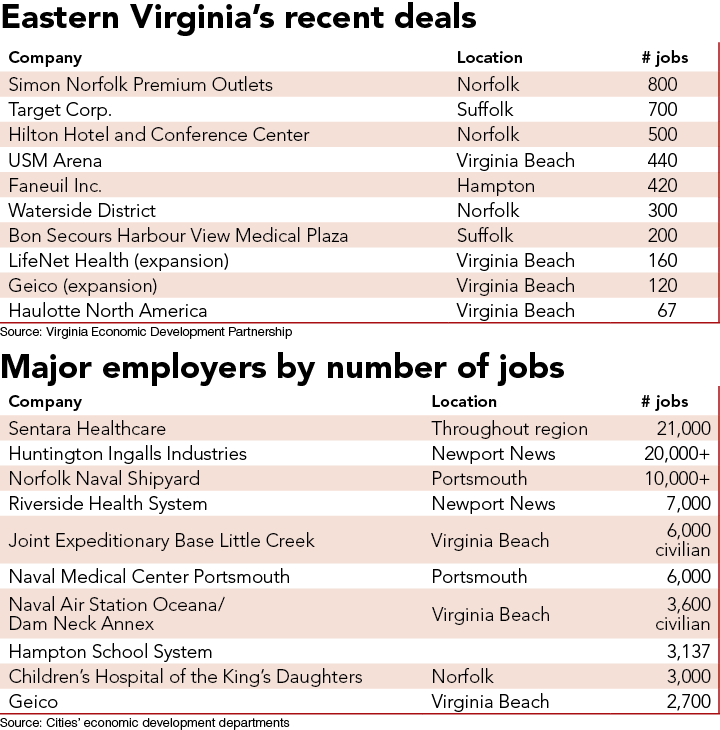 Also underway is the continued development of Midtown Marketplace, a phased $30 million retail development, and an $18 million private investment in the Victory area of the city with two new 7-Eleven stores and the proposed expansion of Autumn Care, a nursing and rehabilitation center.

Suffolk saw more than $100 million of capital investment last year led by three strong projects in retail, medical and logistics. “They are three of our industry targets,” says Kevin Hughes, the city’s director of economic development.

Target Corp. will invest approximately $50 million to expand its distribution center in Suffolk. “They will be hiring close to 700 new personnel in 2016,” says Hughes.

Last year Hampton continued the momentum it gained in 2014. The city has $30 million in capital investments with 750 jobs announced. “We are still pushing the envelope to get more investment in the city,” says Leonard Sledge, the city’s director of economic development.

Wins for the city include a $9 million investment by TE Connectivity Ltd. to expand its sensor solutions operations at its Hampton-based subsidiary, Measurement Specialties Inc., which will add 66 new jobs. In addition, FedEx Ground opened its 200,000-square-foot facility for small package handling.

Faneuil Inc., a provider of customer-care services to government and commercial organizations, announced it will add nearly 200 new jobs to its operations in Hampton. Additionally, Cosentino, a company based in Spain that produces quartz and other stone surfaces, expanded its distribution center, adding more than 32,000 square feet.

The commonwealth designated a new Hampton Roads Center Enterprise Zone to support job creation and private investment in the city last year. “It is an important tool for Hampton to help existing companies grow and to attract new companies and jobs to the city,” Sledge says.