“We’re ready to get this party started,” says Nancy Helman, the city’s director of sports marketing, who celebrated the facility’s Oct. 1 debut with Mayor Bobby Dyer and other city officials.

The cavernous structure has 12 basketball courts, 24 volleyball courts, nine field-hockey courts and a 200-meter, hydraulically banked track (which can control the track’s height) with permanent seating for 5,000 spectators, among many other features.

While not big enough to host an NCAA basketball tournament game, it would be a good fit for the NCAA  indoor track-and-field championship, Helman says.

Dyer says the new center will help the city morph into more of a year-round tourist destination. Though competition wasn’t expected to start in earnest until November, the center is already in demand.

“I mean, my phone rings off the hook,” says Amber Giancola, the facility’s general manager.

The center has already booked 54 events for its first year, 39 of them new to the local market, Dyer says.

While current revenue projections were unavailable, a 2016 report provided by the city estimated that the center could generate more than $630,000 annually in city tax revenue.

In 2019, sports tourism nationwide generated $45.1 billion in spending, according to a July 2020 report for the Cincinnati-based Sports Events & Tourism Association, or SportsETA, which speaks for the industry.

That, of course, was before COVID-19.

The SportsETA report projected that as of December, at least 75 million fewer people will have traveled to sports events across the nation since March, compared with the same period a year earlier, resulting in a $20 billion loss in direct spending in 2020.

Al Kidd, SportsETA’s president and CEO, is very familiar with Virginia Beach’s new facility and has visited there.

“I’m really excited about what you guys have,” he says, noting that the facility’s strengths include a state-of-the-art track and a convenient mid-Atlantic location.

This, however, is tempered by the cloud posed by the coronavirus, he adds. Helman says the center will have an array of virus-mitigation measures specific to each event.

“The health and safety of the athletes and fans and families that come to visit in Virginia Beach is obviously the top priority,” she says. 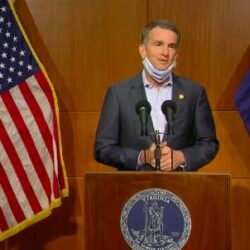