Home News A voice for veterans

A voice for veterans

The day after Deshauna Barber buried her mother last year, she was due in New York to make back-to-back appearances on behalf of veterans’ causes, the focus of her reign as Miss USA 2016. Barber had to put on a happy face, because a sad Miss USA can’t do her job.

“I had to grieve while still chasing a dream,” she says.

A Virginia State University graduate, Barber, 27, is a captain in the U.S. Army Reserve and the first member of the military to win the Miss USA title. In May, she passed the crown to her successor, Kára McCullough, who like Barber had been Miss District of Columbia.

Besides being African-American women representing the same city, Barber and McCullough also have both pursued careers in male-dominated, STEM fields (science, technology, engineering and mathematics).  Before becoming Miss USA, Barber was an IT analyst at the U.S. Department of Commerce, and McCullough was a scientist at the U.S. Nuclear Regulatory Commission.

Facing and overcoming adversity was one of the themes Barber planned to talk about at the Virginia Women Veterans Summit being held in late June in Chesapeake. The Virginia Department of Veterans Services sponsored the event.

She says women in the military know about adversity and the struggles involved in staying on the path they set for themselves.

During the Miss USA pageant in Las Vegas last year, Barber wowed the crowd with her answer to a question about women serving in combat. “We are just as tough as men,” she said. “As a commander of my unit, I am powerful. I am dedicated. And it is important that we recognize that gender does not limit us in the United States Army.”

Besides the loss of her mother, Barber says, she has had to face other struggles in her life, including rebuilding her self-esteem after suffering childhood sexual assault and bullying. 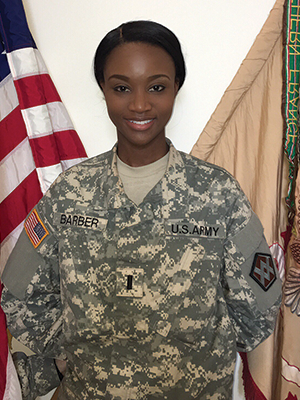 In connecting with business and industries throughout the past year, Barber says, she has been encouraged by their efforts to help and hire veterans. “Companies are doing what they can,” Barber says.

But she says there are still many unmet needs, especially in providing guidance for veterans as they transition from the military.

Too many veterans don’t know how to prepare for an interview, and most struggle in trying to explain how their military skills can meet the needs of civilian companies. “There aren’t enough mentors” to help vets through the process, she says, and too many vets are not finding jobs.

“Mental illness contributes to the high homeless rate for veterans,” she adds, and also has been a factor in the growing number of suicides among vets.

Barber, who was promoted from lieutenant to captain in the Army Reserve during her Miss USA reign, will continue to make Washington, D.C., her home.

After joining the Army ROTC at 17, she was commissioned as a Reserve quartermaster officer in 2011 and was serving as logistics commander for the 988th Quartermaster Detachment Unit at Fort Meade, Md., at the time she became Miss USA.

Barber hopes to stay in the military an additional 14 years, until she reaches the 20-year mark and qualifies for retirement.

She is keeping up a military family tradition. Her mother and father, as well as her brother and sister, all served in the Army.