‘A vital role to play’

Longwood and its president have strong regional ties

Few, if any, college presidents have as many family ties to the institution they lead and the region in which their institutions are located as W. Taylor Reveley IV, president of Longwood University since 2013.

He should not be confused with his father, W. Taylor Reveley III, the president of the College of William & Mary.

And he certainly should not be confused with his grandfather, the late W. Taylor Reveley II, who was president of another Farmville-area institution, Hampden-Sydney College.

Reveley’s ties to Longwood include a great-grandfather who was a biology professor there. He also is the grandson, great-grandson and great nephew of Longwood graduates.

All of these ties help explain the affection that Reveley, a Richmond native, has for Longwood and the Farmville area. “I spent some of my happiest moments as a child here in Farmville,” Reveley says. “Farmville has the soul of a college town.”

Changing local economy
Farmville once was an industrial and railroad hub. Now, the three legs of its economy are retail, health care and education.  Employment in those sectors is led by the sprawling Green Front Furniture store, Centra Southside Community Hospital and the two colleges.

Founded in 1839, Longwood is the third-oldest public university in the state. It has about 5,000 students and offers more than 100 majors.

The university has more than 900 employees, including 248 instructional faculty and more than 300 classified employees. Longwood, its employees, students and visitors spend $49.4 million in Farmville annually, according to a recent economic impact report. Students alone spend more than $20 million in the community.

Many university employees are from Farmville and other nearby communities. “I’m a product of Southside Virginia, born in Martinsville. Longwood is a plum job,” says Ken Copeland, the university’s vice president for administration and finance.

Region’s revival
Reveley, however, believes that Longwood’s role as an economic engine isn’t limited to how many people are on its payroll.  “It is inextricably tied to its educational mission,” Reveley says. “The best way an institution can serve its region is to do what it’s best at, which is educating students.”

The surrounding rural region formerly was a powerhouse for tobacco farming, furniture manufacturing and textile production.  But those industries have waned.

The area is trying to reinvent itself by attracting new industries and putting an emphasis on training at all levels. Overall, the region has experienced a higher unemployment rate than much of the commonwealth and has a relatively low number of college graduates.

Thirteen percent of residents over age 18, for example, have earned at least a bachelor’s degree, compared with a state average of 32 percent, according to a recent community profile of the Commonwealth Planning District, which  includes Amelia, Buckingham, Charlotte,

“We’ve got a vital role to play in helping Southside take full steps into the knowledge economy,” Reveley says.

Keeping costs down
As Longwood’s president, Reveley is focused on improving student retention and graduation rates.

This year, the retention rate — measuring the percentage of freshmen who return as sophomores — ticked up from 78 to 82 percent. In addition, Longwood’s six-year graduation rate has been running about 65 percent.

Keeping tuition under control also is one of Reveley’s top priorities. “I’m certainly very proud that Longwood has had the lowest tuition increases by far, cumulatively, of any [four-year public institution in Virginia, over the last two years. That’s particularly important for Southside students,” Reveley says.

Longwood plans to increase its enrollment by 20 percent to 6,000 by 2025.  “Six thousand is a great number for a public university like Longwood,” Reveley says. “You can maintain the intimacy of scale at that number, while also having the economies of scale to do some big things.”

Students’ views
Longwood’s small-school feel made it a perfect fit for at least two students, Abby Early and Lily Black.

“I came for the smaller school, the small-school atmosphere. I really wanted a one-on-one with professors and not just be a number in a classroom,” says Early, a senior.

(University officials say that Longwood has the largest percentage of classes taught by full-time faculty of all public universities in Virginia.)

“I came to Longwood for the sense of community,” says Black, a sophomore. “I remembered, when I was touring, it was a smaller community, and it was definitely the feeling that I could meet someone new, but I could also see a lot of people on campus that I already knew.”

Projects include dormitories and a new student commons. The university also has established a variety of off-campus apartment communities for students who would rather not live in dormitories.

One of the defining changes in Longwood’s campus came in 2004 with the creation of Brock Commons, a pedestrian mall with trees, plants, fountains and a large tiered plaza.

Brock Commons replaced a narrow street that once divided the campus. A $3 million gift from Joan Brock, a 1964 graduate, and her husband, Macon, a co-founder of the Dollar Tree store chain, helped cover the cost of the $7.5  million project. “They’ve been great,” Reveley says.

He says state-supported institutions are becoming more reliant on philanthropy for growth and improvements.  “To have momentum for new initiatives, you really have to look to philanthropy,” he says.  “That also means helping alumni develop the habit of engaging with their alma mater philanthropically.”

When he took office in 2013, the university was completing a $41 million fundraising campaign, the largest in its history.

Town-gown ties
Making Farmville more of a student-oriented community is a goal for the town and the university.

Carol Broadwater says that Farmville business owners have a great interest in making the downtown welcoming to students and their parents. She and her husband, Richard, opened Amish Originals, a custom furniture store on Main Street 17 years ago.

She sees her sales spike during parents’ weekends and other college events that attract people to Farmville.  “Ninety percent of our sales come from outside Farmville, and 50 percent come from Richmond,” she  explains. 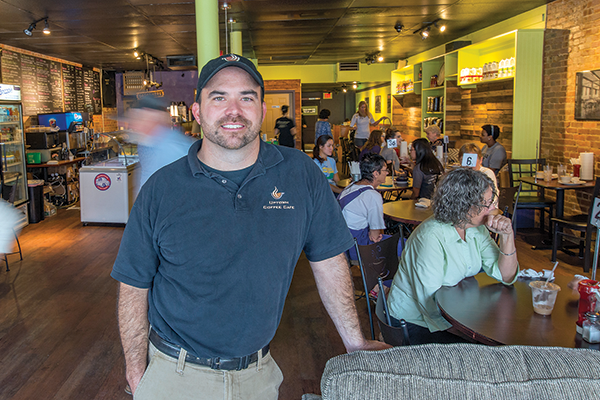 Last year, the center led 69 training seminars that helped create or retain 246 jobs and assisted in generating $7.5 million in new capital, across the region it serves, which stretches from Patrick County in the west to Emporia in the east.

Sheri McGuire, executive director of the university’s Small Business Development Center, says that in the past economic development focused on recruiting big industries that might create a large number of jobs at one time. But over the years, there has been a growing awareness that small businesses are a leading force in job creation.

Shaping citizen leaders
In 2007-2008, Longwood raised its profile by starting to compete at the Division 1 level in intercollegiate athletics.

Recently, Longwood scored a coup sure to raise its national profile by being selected to host the single vice-presidential debate for the 2016 election. It is scheduled for Oct. 4, 2016.

Reveley also has sought to enlarge upon the region’s association with one of the biggest turning points in history: the civil rights movement.

In 1951, students at Moton High School in Prince Edward County —  a school for African-Americans — walked out of classes and began a two-week strike to protest overcrowded and inferior conditions at the school. They were led by 16-year-old Barbara Johns.

A suit filed by the students and their families became a part of Brown vs. Board of Education, the historic U.S. Supreme Court decision that in 1954 declared segregation in public education was unconstitutional.

In July, the university formalized a relationship with the Moton Museum, pledging operational support, along with help in fundraising, marketing and other areas. The museum is located in the former high-school building.

Reveley said the affiliation provides an opportunity to enhance the university’s long-stated mission to shape citizen leaders, just as Barbara Johns led students out of Moton High School and stepped into history.

Revisions are currently underway to center the university’s general education curriculum on citizen leadership, creating what university officials believe will be a distinctive niche in higher education.

Reveley observes that Longwood is at the crossroads of history, bookended by the Civil War and Civil Rights.

Gens. Robert E. Lee and Ulysses S. Grant marched past the north end of campus during Lee’s retreat toward Appomattox, where the Civil War ended.

An imposing statue erected by Confederate veterans and the Daughters of the Confederacy lies just across from Longwood’s main buildings. Meanwhile, the Moton Museum lies at the south end of the campus.

“Farmville and Longwood are intensely historic places,” Reveley says, pausing for emphasis. “Really drawing attention and amplifying that deep history is a powerful thing, and I think that has resonated nationally.”