On a September trolley tour of Danville’s revitalizing downtown, the city’s economic development director, Telly Tucker, recounted to me a memory of his first day on the job, back in 2014. Stopping into a local bakery to grab a cup of coffee and a pastry, he introduced himself to the young lady behind the counter, prompting her to respond, “Why’d you move to Danville?”

“With all of the assets I see and our potential for future growth, if we as residents and stakeholders don’t speak well of ourselves, how can we expect others to?” Tucker asks. “We all know we have challenges, but overwhelmingly, the good outweighs the bad, and the good doesn’t get enough attention.”

This anecdote came to mind a week later when I was in Harrisonburg covering the Federal Reserve Bank of Richmond’s inaugural Investing in Rural America conference, held Oct. 2 at the Hotel Madison & Shenandoah Convention Center.

Speaking on the importance of rural communities and small towns changing their narratives, Richmond Fed President Thomas Barkin said that’s necessary not only to promote themselves to outsiders, but to retain the people who already live there.

“Changing the prospects of a town, it seems to me, starts with aligning the mindsets of the people in that town,” Barkin said. “And a great metric is whether the kids who grow up and go to school there choose to come back.”

In this month’s cover story, we’re examining how the American workforce is about to undergo a seismic shift in the next decade, as millennials and Generation Z become the dominant working population. Attracting and retaining these younger workers is top of mind in economic development circles, but nowhere are they more desperately needed than in small town America.

Rural population growth has been stagnant or shrinking for decades while urban growth has been skyrocketing. However, rural people account for about 60 million people in the United States, or one in five Americans, a not-at-all insignificant percentage.

And rural workforces are dwindling and aging, as localities grapple with how to grow — and harvest — a crop of young workers with 21st-century skill sets.

In his first 18 months as Richmond Fed president, Barkin has learned that there are two economies in the Fed’s Fifth District, which includes Virginia, West Virginia, Maryland and the Carolinas — “one in bigger cities and one in smaller towns.”

While larger metro regions are thriving in Virginia’s Golden Crescent, which stretches from Northern Virginia through Richmond to Hampton Roads, the commonwealth’s rural areas are struggling — with everything from graduation rates to access to medical care and broadband.

In some areas of Southside and Southwest Virginia and the Shenandoah Valley, as many as 60% of households have no internet subscription. But increasing its usage and availability is critically important: “Like rural electrification 80 years ago,” Barkin said, “the benefits — in terms of opportunity identification, skill-building, telemedicine and the like — are too big to pass up.”

Also contributing to the rural economic gap and social isolation are the closures of local banks, hospitals and colleges, Barkin said, not to mention the ravaging impact on small-town workforces of opioid addiction.
Faced with all that, “I’ve encountered arguments that the challenges of distressed rural communities are too difficult to solve,” Barkin said. “They’re not.”

Fixing these challenges, he said, will require focus, persistence, regional cooperation and a concerted effort from residents and local leaders to improve educational offerings and seek out and take advantage of funding opportunities.

I saw those traits in abundance among the four dozen or so community and business leaders who participated in Virginia Business’  Sept. 24 Meet the Editors luncheon at Danville’s high-tech Institute for Advanced Learning and Research, where they’re focused on solutions such as innovative workforce development programs that begin as early as middle school.

Millennials can find a lot to like in Danville, with its attractive turn-of-the-century buildings, affordable cost of living, breweries, Minor League Baseball team, high-speed internet, stunning riverfront YMCA and        11.5-mile Riverwalk Trail — not to mention outdoor activities like kayaking, paddleboarding and ziplines.

But for Danville — and other small towns like it — a major challenge of the next decade will be convincing these in-demand young adults that they have a future there.

For Tucker, that effort started with the cashier at the bakery. Now, whenever he sees her, it’s a running joke for him to ask her to say three things she likes about Danville.

She always comes up with answers. 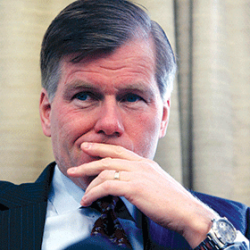 A Clinton scenario could have ripple effects in Virginia